The regional strategic environment was unfavourable to India. Notwithstanding the many challenges and costs imposed by the civil war in East Pakistan, PM Indira Gandhi played her modest cards deftly. She led India to its most emphatic military victory with a political outcome that was unprecedented in the annals of 20th-century history, leading to the creation of a new nation in the shape of Bangladesh. 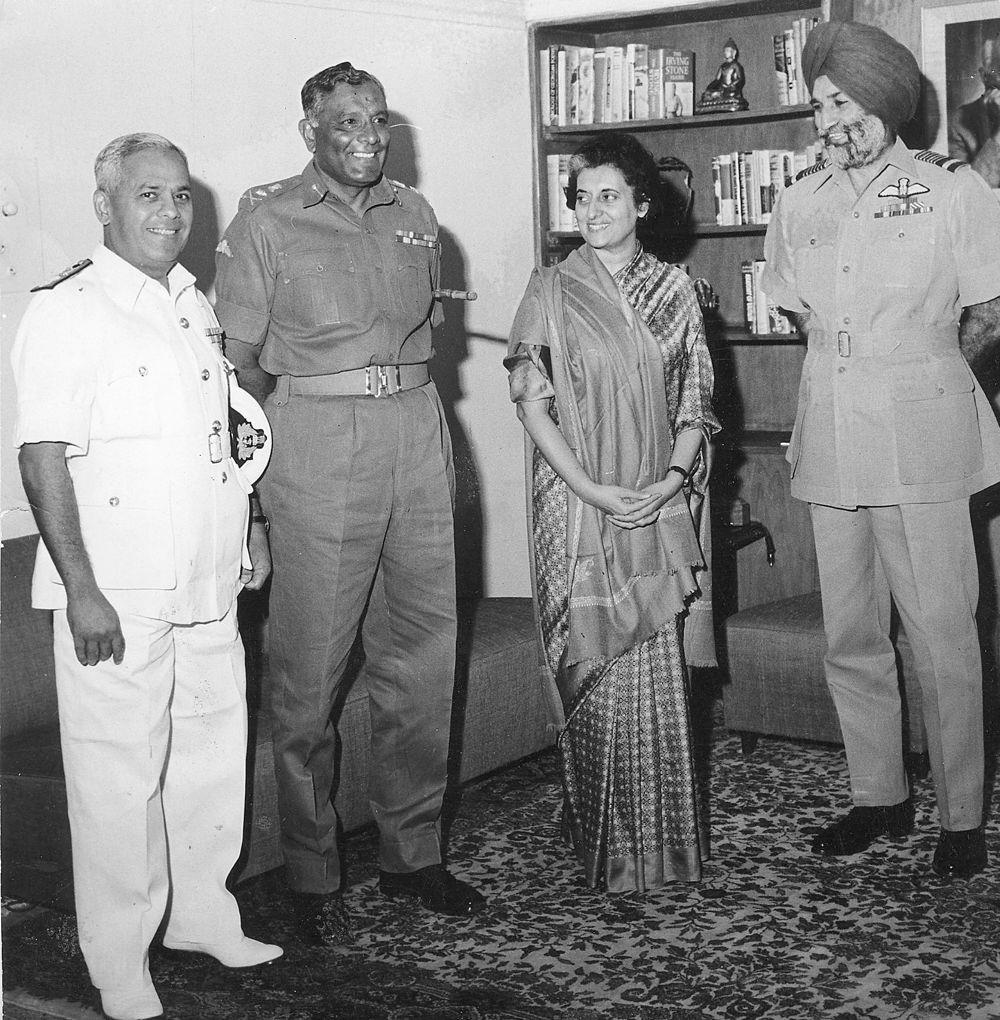 Equidistant: Civil-military ties were balanced during Indira Gandhi’s time and the Army resisted bids to involve it during the Emergency. File photo

Collectively, these events and the manner in which they unfolded, point to the distinctive profile of the military in the larger Indian democratic edifice and the deep esteem and respect that the common citizen has for the Indian ‘fauj’ — a sentiment that has not been bestowed on any other institution. As India prepares to celebrate the 75th anniversary of Independence in August 2022, the institutional relevance of the military to the democratic experience merits attention.

The brief 1961 war for the liberation of Goa from Portuguese rule is an important but often ignored punctuation in India’s military history. It testifies to the role played by the Indian armed forces in the consolidation of the nascent republic as it emerged from the colonial yoke. Despite the western condemnation of the then PM Jawaharlal Nehru’s decision to use military force to evict the last colonial power, the realpolitik compulsion for independent India was inescapable.

The symbolism of a former colony taking recourse to arms against a European colonial power barely 16 years after the end of World War II was important but remained muted in keeping with India’s strategic culture of reticence in matters military. To its credit, the Indian military conducted itself with professionalism and rectitude in the Goa operation and one recalls former Portuguese PoWs recounting their humane treatment in India as per the Geneva Protocol with nostalgia and gratitude.

The 1971 war that led to the birth of Bangladesh was a tectonic geopolitical event and the enormity of what India had achieved under the leadership of PM Indira Gandhi (who was only 54 years old at the time) merits objective contextualisation.

India was emerging from the humiliation of the 1962 border war with China and the demise of PM Nehru in May 1964 added to the national ambivalence and anxiety. The 1965 war with Pakistan was a stalemate and the sudden death of PM Lal Bahadur Shastri a major setback.

The political discord that followed within the Congress party led to a hesitant Indira Gandhi being elected as the Prime Minister — the first woman to assume this high office.

At the time, her critics derisively dubbed her the ‘goongi gudiya’(dumb doll) and opined that her tenure at the top would be short-lived. Recall also that the US had an estranged relationship with Delhi during that period and this was an India that was economically weak and still dependent on food imports.

The regional strategic environment was unfavourable to India. Notwithstanding the many challenges and costs imposed by the civil war in East Pakistan, PM Indira Gandhi played her modest cards deftly. She led India to its most emphatic military victory with a political outcome that was unprecedented in the annals of 20th century history — the creation of a new nation that was sui generis — Bangladesh.

While a professional and apolitical military enhances and burnishes the resilience of the democratic trajectory, the fear of states being overwhelmed by overt and covert militarisation was a perennial anxiety and 20th-century history is replete with the catastrophic consequences of such transgressions.

Consequently, under PM Nehru (1947-64), the civil-military relationship was uneasy and exacerbated by the maverick Defence Minister Krishna Menon. An appropriate degree of equipoise was restored during the Indira Gandhi years and the 1971 military victory was a turning point in how India perceived the professionalism and gallantry of its fauj.

The apolitical nature of the Indian military came to the fore soon after the Bangladesh war. When PM Indira Gandhi imposed the Emergency in 1975, an attempt was made to involve the Army and to his credit — then Army chief General ‘Tappy’ Raina correctly and firmly resisted such overtures. Defence Minister Bansi Lal was part of the Sanjay Gandhi coterie and his suggestions to involve the Army were ill-advised. While the details remain opaque, the Indian military retained its institutional credibility of being committed to the Constitution, the flag and the nation, and not any particular political party, or much less a powerful leader.

In the past few years, since its electoral victory in 2014, there has been a visible attempt by the BJP to project itself as a party that is more committed to national security and the military than its opponents and a degree of progressive institutional co-option is discernible. This is cause for disquiet and can have corrosive consequences as India@75 gathers traction.

From the surgical strike of 2019 to the induction of the Rafale fighter aircraft — spectacle is now the dominant leitmotif and the manner in which some sections of the mass media have joined this adulation of the military, is illustrative.

This outpouring of admiration is perhaps testimony to the respect that the military elicits. But it is pertinent to add that part of the reason is that at a time when almost every major institution in India is perceived to have compromised its rectitude by leaning towards the majoritarian ideology of the BJP — the fauj has remained relatively insulated from the divisive socio-political churn that India is now experiencing.

The civil services and the police have lost the professional sheen once associated with them and the judiciary has often deferred to the executive at the expense of the citizen and the spirit of the Constitution.

The more recent vilification of the Muslim community and the attack on churches augurs ill for internal security and societal amity and many eminent citizens, including retired service chiefs, have expressed their dismay at this dog-whistle pattern.

The challenges to national security (with the Covid-related pandemic erupting in its latest variant) are both complex and abiding. State- sponsored terrorism from Pakistan apart, the Chinese pressure apropos contested territoriality, warrants more resolute action than opacity and optics.

India is waiting for the next CDS to be appointed and the lodestar must be to ensure that the institutional rectitude of the military is not compromised — by design or default.