We have reached a point where no one believes the statements made by party spokespersons or the elaborate explanations offered by the police and magistrates. The public has decided that it is time to take charge of its own destiny 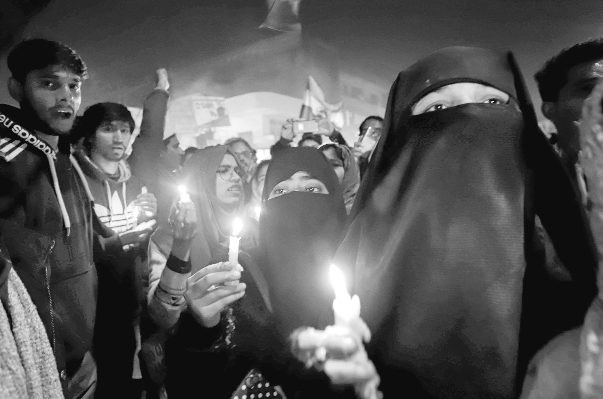 Women have been persistent in their protest at Shaheen Bagh since December 15. PTI

The year 2020 has had the bloodiest beginning of any decade I can remember. At a time when everyone celebrates the New Year with cheer and happiness, the entire country was shaken by the horrific images of violent attacks by masked goons inside the JNU campus with lights turned off for them to do their dirty work. From that moment on, not a day has gone by without protests, slogan shouting and mayhem as roads are cordoned off and people advised to stay away from these spots. For over a week now, women have sat in the bitter cold of a winter that has surpassed all records, at Shaheen Bagh — a locality near another famous Delhi University, Jamia Millia Islamia — in protest against police atrocities on students inside the campus, including the library of all places.

It is not just Delhi but virtually every major city in India that has vociferously protested against the violence in universities across the country. Each day, more and more people join in as citizens wake up to the power of their voices. I had begun to see this at the sit-in of the feisty women of Shaheen Bagh, who were there like tiger moms protecting their ‘bachchas’ and saluted the gumption of a 92-year-old grandmother, toothless and swaddled in many shawls, who gave as good as she got when asked what had motivated her to sit in the bitter cold on a hard street. However, it is interesting to note that despite every effort made by politicians to fish in troubled waters and somehow piggy-back their way into the limelight, they have been resolutely kept out. I wish the same could be said of our television anchors who preside over ugly slugfests and hold proxy wars for their political patrons at prime time.

As these mass public protests spread, they are a warning to our so-called leaders that public anger and disgust can be crushed no longer. Goons, vandals and complicit policemen — all the traditional weaponry of a failed state — have been unleashed and the people are ready to take them on. Notice too, that the violence has come from the custodians of law while it is the protesters who have kept their peace and dignity. Our politicians, who have thus far merely paid lip-service to non-violence, can learn a few lessons on the power of the people who refuse to obey those who betray the Constitution. Civil disobedience and satyagraha are now becoming a living example rather than a lifeless chapter in a history book. Those of us who were born after Independence can understand now what Gandhiji meant when he said that while he was ready to die for his principles, there was no cause for which he would resort to violence.

We have reached a point where no one believes the statements made by party spokespersons (of every side) or the elaborate explanations offered by the police and magistrates. The public has decided that it is time to take charge of its own destiny. The Right, Left and Centre are all equally guilty of pandering to their vote banks, all responsible for dividing people on the basis of caste and religion, all interested only in lining their pockets and all accomplished liars. Unemployment, inflation, inadequate public transport and public health facilities, poor education outreach — when will these fundamental ‘rights’ be provided? Slogans, rhetoric and false promises will no longer satisfy a country where babies die because of inadequate oxygen supply.

Bad as this seems to us, there is a huge churning taking place all over the world. From Trump’s fatal attack on Iran’s top general with after-shocks predicted all over Central Asia, to Boris Johnson’s victory and civic unrest in Latin America, what we are witnessing is the slow disenchantment with democracy as practised so far. The marginalised and the disenfranchised have finally found the courage to ask those questions that needed to be answered a long time ago. The glaring chasms that separate the two sides in each country had prevented them from any social intercourse or empathy with each other. These divisions, encouraged and fostered by vested political interests, are now exposed as women, minorities and the poor are slowly becoming aware of their power. This is why the entitled dynasts find themselves isolated and helpless. If a leader is thrown up in this ‘manthan’, believe me it will be someone who is untainted by personal ambition and a true representative who understands the pain of the sufferer. ‘Vaishnav jan te ne kahiye, peer parayi jaane jo,’ was one of the Mahatma’s favourite hymn and not without reason.

I have great faith in the wisdom of our common folk: I trust neither the suave orators nor the sophisticated academic who have no idea of what the common Indian needs: a clean, just and well-governed country. Above all, we need to wrest the country out of the hands of those who have fattened themselves on the misery of others and neither care nor wish to understand what it means to live at the mercy of a lawless administration. If our leaders are so foolish that they cannot see the writing on the wall and if our worthy Prime Minister really means to provide ‘Sab ka saath, sab ka vikas aur sab ka vishwas,’ then he’d better start now to undo the wrongs that have been done in the name of democracy.