The spectre of two Dalai Lamas — one quite outside Beijing’s control, like presently in the case of the Panchen Lama — haunts the Chinese communist leadership. Beijing’s fear is that a Dalai Lama outside the CCP’s control would continue to be revered by Tibetans and other Chinese Buddhists as at present. The reincarnate could also persist in raising issues such as autonomy, freedom and human rights of Tibetans. 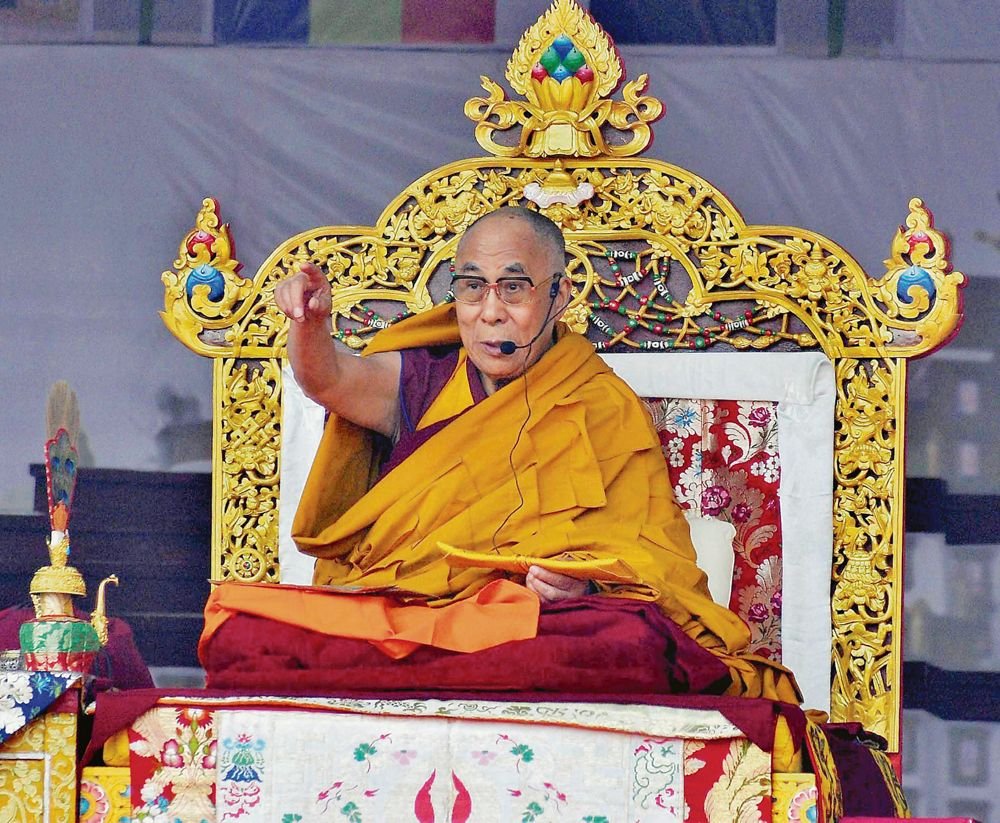 In the eye of the storm: The United States wants to keep China away from interfering in the selection of the Dalai Lama’s successor. PTI

The visit of Penpa Tsering, elected Sikyong (leader) of the Central Tibet Administration, towards end of April to the United States has nudged America’s interest in the Tibet issue further into the limelight. He met Uzra Zeya, US Under Secretary of State and Special Coordinator for Tibet, and Kurt Campbell, Coordinator for Indo-Pacific Affairs on the US National Security Council, in Washington. Uzra Zeya is quickly following this up with a visit to Dharamshala on May 18 and meeting with the XIVth Dalai Lama and members of the Kashag, or Tibetan Cabinet. High on their agenda is to urge Beijing to resume talks with the Tibetans and reaffirm the US position that China must not interfere in the selection of the next Dalai Lama.

While the Chinese lodged their routine protests, they have been preparing for this eventuality for over a decade. The spectre of two Dalai Lamas — one quite outside Beijing’s control, like presently in the case of the Panchen Lama — haunts the Chinese communist leadership. Beijing’s fear is that a Dalai Lama outside the Chinese Communist Party’s (CCP) control would continue to be revered by the Tibetans and other Chinese Buddhists as at present. The reincarnate could also persist in raising issues such as greater autonomy, freedom and human rights of Tibetans. With Beijing’s relations with the US and Europe getting progressively strained, this will put China under increasing pressure. A Dalai Lama nominated by Beijing will also not be accepted by the nearly 6 million Tibetan people, much as the Chinese-nominated Panchen Lama, Gyaltsen Norbu, is only now after 25 years beginning to be acknowledged, but as just a “learned monk”!

Beijing’s apprehensions are reflected in the progressively tough new regulations being imposed across the Tibet Autonomous Region (TAR). Late this January, a directive to all districts and municipalities, across the Tibet Autonomous Region (TAR) and Tibetan areas in adjoining provinces, mandated that workers employed in Tibetan government offices, schools or hospitals must be “trustworthy and reliable citizens” and remain loyal to the CCP. It instructed them to renounce the Dalai Lama and his followers. Continuance in employment and promotions have been made conditional upon such a declaration. Imparting Buddhist teachings over the internet are similarly strictly regulated.

At a two-day symposium in Lhasa and Shigatse on January 13-14, the TAR authorities reiterated warnings to serving and retired officials to be loyal to the CCP and always have a clear-cut and firm political stance, especially in opposing “separatism”, safeguarding national unity and in drawing a clear-cut line from the “Dalai clique”. They were warned that the party will not tolerate “two-faced” people. Surveillance has steadily become more intrusive.

The directives come amid persistent efforts at regular intervals by the Chinese authorities to curb worship of the Dalai Lama, warnings to Tibetans not to keep photographs of the Dalai Lama in their homes, and weed out “double-faced” cadres, or those working for the TAR government while concealing their loyalty to the Dalai Lama. There was an uptick in warnings by TAR leaders against ‘separatist’ elements and “double-faced” cadres prior to Xi Jinping’s visit to Tibet in July 2021. Though the efforts have met with negligible, or very limited, success they are likely to be more stringently enforced since they come in the politically sensitive run-up to the 20th Party Congress likely to be held in November.

On April 22, China’s Ministry of Education published the admission criteria for colleges and quotas for certain ethnic minorities. These regulations, under the distinct heading of “Ideological and Political Morality Assessment”, specify “ideological and political morality” as the “main” standard for admission. This comprehensive evaluation will include inputs from the CCP cadres of the city or village where each candidate resides.

The Chinese leadership is simultaneously striving to promote Gyaltsen Norbu, whom they appointed the Panchen Lama in 1995. The Panchen Lama has an important traditional role as the reincarnate Dalai Lama’s tutor. The Dalai Lama performs a similar function for the Panchen Lama. Gyaltsen Norbu has been gradually sought to be introduced to the Buddhist clergy and believers with increased tours inside TAR. In 2006, he attended the China-sponsored World Buddhist Forum — his first international gathering — and gave a speech in Tibetan on Buddhism and national unity. In 2012, he travelled outside Mainland China for the first time to attend the World Buddhist Forum in Hong Kong. It was only in mid-May 2019 that he made his first international trip and visited Thailand.

Despite these persistent efforts, protests by the Tibetan Buddhist clergy and ordinary Tibetans in TAR and Tibetan areas in adjoining provinces continue to be reported. Two self-immolations by Tibetans occurred last month. The number of Tibetans inside TAR being prosecuted for endangering ‘state security’, which includes subversion, ‘splittism’, incitement to subversion, espionage, and violations of state secrets has increased since 2018. The number of Tibetans in TAR prosecuted on charges of endangering ‘state security’ rose from 37 in 2019 to 74 in 2020. Another 15 Tibetans were sentenced in western Sichuan while the figures for other Tibetan regions are not known.

US support will complicate matters for China during the period the XIVth Dalai Lama’s reincarnation, or ‘emanation’, is settling in. The worldwide networks of Tibet Support Groups, the Tibet Information Network and Friends of Tibet Parliamentary Groups will get more incentivised and actively project the XIVth Dalai Lama’s successor. Tibetan youth in exile might make a push for their cause of independence, energising Tibetans inside China. A further complication will be in case, as is probable, the successor is discovered in India!