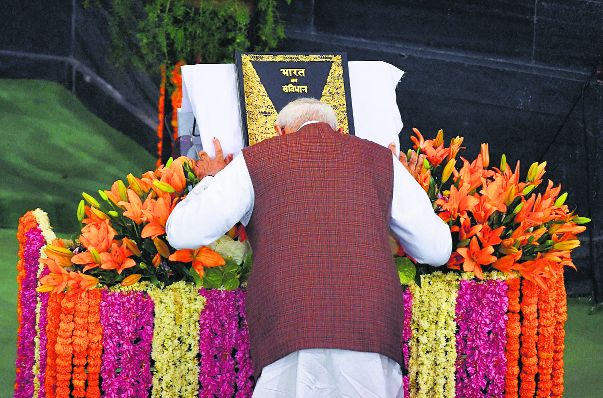 Once more: The renewed exploration of the Constitution is a good starting point.

The liberal spirit is suffering from terminal angst. Its political expression in liberal democracy is an endangered political species. What is the liberal spirit? It is a conception of society where the dignity of the individual is sacrosanct and rights are citizen based. A liberal society upholds the fundamental rights of each individual to life, liberty, expression and association, the only restraint being the rule of law, not the rule of state or a group or community. The liberal spirit not merely tolerates but celebrates dissent. It believes in the dictum that what is more dangerous is not when there are questions to which there are no answers but rather when there are answers which are not open to question. A liberal society creates equal opportunities for each individual to develop his innate genius and realise his potential. It is non-discriminatory among individuals irrespective of caste, creed or religion. But fraternity is equally fundamental because a sense of affinity with one’s fellow citizens, the empathy for one another in recognition of a larger humanity, these are values without which a liberal society has no meaning.

To survive and to flourish, a liberal society needs a unique state structure, namely, the political dispensation of a liberal democracy. The state is as much bound by the rule of law as is the citizen and exercise of state authority is subject to challenge by even the most humble of its citizens. Another feature is the existence of independent and constitutionally empowered institutions which serve to restrain the arbitrary exercise of state power. An independent media and a robust civil society are its other essential ingredients. For a concrete and comprehensive articulation of the liberal spirit and the institution of liberal democracy, one need look no further than the Constitution of India. But while lip service is paid to the Constitution and constitutionally empowered institutions still remain in place, these are being systematically and relentlessly hollowed out. This is not just true in India but in other democracies as well. How has this happened?

I trace the origins of this slide to 1980 when Reagan in the US and Thatcher in the UK led the retreat of the state from the economy and elevated laissez-faire economic strategies as instruments of both economic prosperity and social welfare. The role of the state in wealth and income redistribution was progressively decimated and even made illegitimate. The collapse of the Soviet Union in the early 1990s gave further momentum to this trend. The magic of the marketplace was now hitched together to the notion of liberal democracy. Free markets led to successful liberal democracies and liberal democracies became synonymous with free markets. Thus was born the touching faith in the inevitability of China’s embrace of capitalism leading to its becoming ‘like one of us’. But the very moment of seeming victory of liberal democracy marked the beginning of its unravelling. It became obvious that there was nothing automatic about a free market leading to egalitarian society. The enshrinement of competition, above all else, in delivering prosperity paid no attention to those left behind.

The failure of liberalism lies precisely in its acquiescence in this new orthodoxy, its failure to question these ‘answers’. Globalisation delivered immense benefits across the board in terms of rising prosperity but states failed to ensure the egalitarian distribution of these benefits because the free market was assumed to achieve that automatically. Globalisation is not responsible for inequalities of income, wealth and opportunity. It is the failure of public policy which liberals failed to expose. When the free market went into free fall in 2007-08, so did the credibility of the liberal democratic ideal. India has not been immune to these forces. The orthodoxies of the past four decades are no longer tenable. How can one salvage the liberal ideal and liberal democracy?

The liberal idea must be preserved. It still has the power to help us deal with the challenges we confront today because it is the unbounded contention of ideas that will engender possible solutions. If globalisation is here to stay, as I am convinced it is, then we need societies that are capable of adapting to change, of being able to handle immense diversity and cultivate a new spirit of cosmopolitanism and internationalism. Only liberal democracies with their respect for diversity and commitment to non-discrimination are best suited to navigate the new landscape. The pandemic raging in our midst is laying bare the bankruptcy of populist authoritarianism and crass mediocrity that pretends to represent the disempowered and deprived but is unable, unwilling and incapable of mobilising society to deal with current and looming challenges. Instead, there is a constant recourse to quick fixes, the bypassing of institutions and of constitutional norms, and worse, the overturning of the very notion of the rule of law. This is how in India, we have ended up with brazen encounter killings to applause from large sections of society which are unable to understand that once the rule of law is breached they will be its next victims.

How do we engage in a discourse that leads us back to a contemporary design of liberal democracy? What must be its key features? The renewed exploration of the Constitution is a good starting point. Even those paying lip service can hardly object.

If liberalism survives in India, its future in the rest of the world may be brighter.