PM Modi should seize the opportunity to iron out outstanding issues 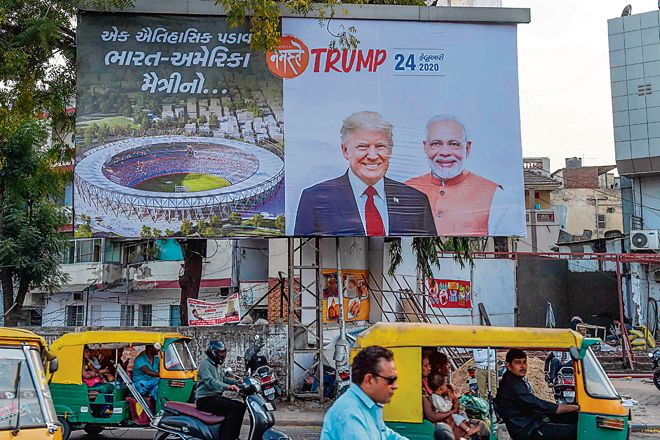 The Indian diaspora plays an increasingly important role today in promoting understanding abroad of the country’s unique cultural, ethnic, linguistic and religious diversity as the most populous democracy in the world. This was demonstrated, in recent years, in cultural events organised by India’s diplomatic missions, in partnership with the growing diaspora. The international impact of the interactions with the diaspora was noted across the world, when PM Modi addressed a gathering of 60,000 PIOs at the Wembley Stadium, London, in 2015. British PM David Cameron also participated in the event. This was followed, soon thereafter, by ‘Howdy, Modi!’ in Texas. President Trump also attended the function. The otherwise sceptical, and traditionally none too friendly, Washington Post, described the event as: ‘The largest-ever political gathering with a foreign political leader, in the United States’.

Trump has succeeded in antagonising political leaders from countries across the world, friends and foes alike. He is now riding high domestically, after the US Senate rejected a resolution for his impeachment. The US economy has been growing steadily ever since Trump assumed office, though many acknowledge that the continuing growth emerged because of policies initiated by President Obama, including the new and widely appreciated approach to issues of national healthcare. Most importantly for Trump, unemployment has substantially fallen, which will be projected as his major achievement in the forthcoming presidential elections.

Trump will be welcomed by Modi in Ahmedabad, and feted at a huge public gathering of five lakh people. This will also be viewed in the US as being different from Trump’s blunt and frank approach when dealing with the leadership of key allies like Canada, France and Germany. Trump has also earned the wrath of people in most Islamic countries following the extraordinary peace proposals drafted by his son-in-law Jared Kushner on the Palestinian issue. These proposals have been rejected even by key US allies like Saudi Arabia. Improvement of ties with the most populous democracy would be noted as one of Trump’s achievements in his foreign policy. One, however, hopes that the Trump administration will move ahead in resolving differences with India, arising from restrictions on India’s exports.

The US and India share a common concern about China’s growing assertiveness in the Indo-Pacific region, where Beijing’s maritime boundary claims are increasing tensions. India has evidently decided to join the otherwise inactive ‘Quad’ (US, Japan, Australia and India) for enhancing security in the Indo-Pacific Region. The Quad appears to be preparing for moves to balance the power of an assertive China.

A substantial portion of the world’s sea-borne movement of oil and gas traverses through the sea lanes of the Indian Ocean. The move to activate the Quad marks a significant milestone in India’s foreign policy. India has realised that China is determined to ‘contain’ it regionally and on J&K using Pakistan. Balancing Chinese power is now crucial. Activating the Quad and making common cause with countries like Indonesia and Vietnam appears to be the first step in this direction.

The agenda for talks with Trump will include the proposed US withdrawal from Afghanistan. People in the US are tired of American participation in the Afghan conflict. There is little doubt that Trump will ensure complete withdrawal well before election day. The Afghan conflict has cost the US treasury an estimated $1.5 trillion, and 2,400 servicemen have been killed in action, while tens of thousands of Afghans have perished. Pakistan still serves as the base for the most-feared Afghan terrorist group, the Haqqani Network, of the Taliban. It has been under huge US pressure to ensure that it keeps its Taliban proteges away from inflicting serious casualties on US forces as the withdrawal gets underway. The Taliban now controls an estimated half of Afghanistan territory.

It would be important for India to stress that a return of the Taliban to power in Afghanistan would lead to a resurrection of Pakistan-backed terrorism. Trump should be persuaded of the importance of ensuring that even as US forces are being withdrawn, the Afghan government forces should have the backing of sufficient airpower. Moreover, the ethnic differences and challenges in Afghanistan could lead to a fractured structure of governance, akin to the situation prevailing in the country before the US intervened.

Trump does not share the anti-Russian fixation of the US strategic and political establishment. Dealing with him on this score will be relatively smooth. Trump himself has a more relaxed approach to relations with Russia than his predecessors. The routine disapproval of our ties with Moscow, which one finds in Washington, will not feature strongly, as in the past, in exchanges with Trump. But we will almost certainly face some direct questions about developments in J&K. The international community, by and large, understands India’s compulsions for effecting the constitutional changes. Our differences with the US and its European allies are essentially on two issues. These pertain to concerns on the denial of regular Internet and telephone connectivity to the people in J&K, and the continuing arrest and detention of mainstream political leaders, who have not been advocates of violence or separatism, and have worked within the provisions of India’s Constitution. These differences are best addressed and resolved, sooner rather than later.