Redrawing defence plans to be Covid-ready

Multi-tasking is inescapable for militaries such as ours, but the peculiar nature of the corona threat would, perhaps, call for a revamp of our force-structuring. Two facets of Humanitarian Assistance and Disaster Relief would stand out: heavy lift aircraft of the C-17 class and naval amphibious ships of the Trenton/Jalashwa class to cater to a large number of the diaspora to be rescued, with the challenge of social distancing. 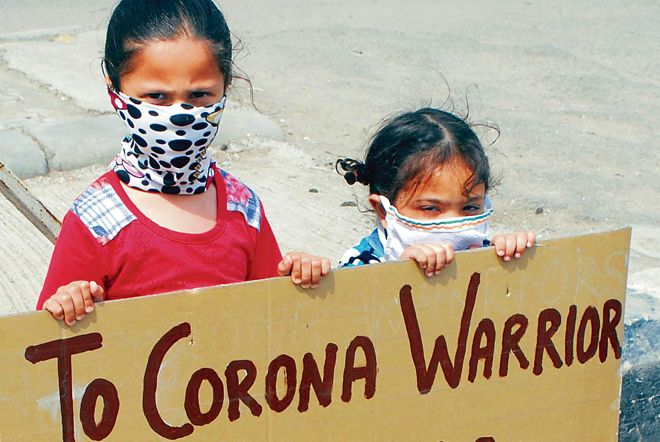 Pandemic aftermath: Our strategic priority is bound to tilt towards domestic rebuilding and public health resilience than dealing primarily with external threats.

The unprecedented fear, public health crisis and economic devastation caused by the ongoing pandemic are bound to cause reappraisals in strategic priorities for most nations and entities, more so for hitherto military powers such as the US and the North Atlantic Treaty Organisation (NATO). The past three months have shown a different breed of life saviours in action, seen across television screens around the world — the health professionals who are putting their lives on the line daily while saving many lives. It would be the general opinion among the citizenry that these dedicated health workers were indeed the real ‘corona warriors’, traditional militaries willy-nilly getting sidelined in the bargain.

While some role was indeed played by the army engineers or national guard reservists in the US, regular military and paramilitary are providing vital quarantine facilities and some much-wanted treatment facilities, such as the CRPF and others in India. The Indian Army needs to build in social distancing norms into its peace-time activities and exercises, at least till a vaccine or a cure is available in India. Indian Air Force aircraft have been employed to bring stranded Indians back from China, Italy and Iran and plans are afoot to evacuate our large diaspora (around 5 lakh) from the Middle East via Indian naval ships.

This increased importance of HADR (Humanitarian Assistance and Disaster Relief) would call for a re-evaluation of our force-structuring. That is even more important, given the fact that the Indian diaspora is spread across the globe and their physical and emotional well-being become priorities for any ruling dispensation.

Going forward, a societal retake on relative dangers posed by a traditional enemy and an unseen virus is but natural. The two-front war threat, along with terrorism/counter-insurgency in India’s context, would continue into the foreseeable future.

In March, the Americans were engaged in military operations in Iraq while fighting the pandemic, air strikes against Iran-backed militia’s weapon storage sites being a case in point. Iran and the US are facing off on the Iraq front while struggling to combat the corona outbreaks back home. Likewise, the NATO and US militaries were redeployed in the midst of the pandemic to statedly counter drug cartels in the Pacific.

So, multi-tasking is inescapable for militaries such as ours, but the peculiar nature of the corona threat would, perhaps, call for some inescapable revamp of our force-structuring. Two facets of HADR would stand out: heavy lift aircraft of the C-17 class and naval amphibious ships of the Trenton/Jalashwa class to cater to a large number of the diaspora to be rescued, with peculiar challenge of social distancing.

Traditional war-fighting domains of land, sea and air would perhaps cede importance to cyber and space domains. Large-scale cyber attacks against critical infrastructure could threaten our people directly by impacting economy, healthcare and our basic way of life, perhaps even more than what Covid-19 has already done to us.

Likewise, food distribution supply chains, banking and telecommunication could be adversely impacted by a cyber attack. A fallback on reservists could be an option, especially in aid of civil power. Cutbacks in defence spending may become inevitable to retain key war-fighting and internal defence priorities.

In our context, this could translate into increased budgets for the NCC, paramilitary and the National Disaster Management Agency, even perhaps at the cost of some big-ticket military purchases. Doctors, nurses, truck drivers and grocery store clerks may be risking their lives more than traditional militaries on the frontline and the nation is duty-bound to recognise their service by way of better pay and perks for them.

This may sound preposterous to the traditionalist and a careful weighing of priorities by strategic defence planners would be in order. In other words, the military needs to become leaner and meaner while using critical competing funds for creating much-needed civilian capabilities in public health and associated infrastructure. Care should, however, be taken to ensure that the fauji elan is not compromised in any manner, least of all by way of an adverse impact on recruitment and enrolment in the three services.

The pandemic thus portends to be a critical inflection point for reorienting the strategic mindsets of militaries. After all, the basic mission of any military is to defend the nation and its people.

To achieve this, therefore, some reprioritisation of force structures, doctrines and training in all three services would be called for to counter such strange, unseen threats. There have been periods in our military history when some attention was given to fighting in a nuclear environment and under bio-war situations. These need to be relooked in the light of what happened aboard USS Teddy Roosevelt and other US naval platforms to evolve ways and means of retaining combat efficiency of the armed forces.

Just as the Cold War gave way to increased peace-keeping missions and the 9/11 attack caused wars in Afghanistan and Iraq, the pandemic threat is bound to tilt our national strategic priority towards domestic rebuilding and public health resilience than dealing primarily with external threats. One sees some enterprising civilian and military professionals designing apps to monitor citizens’ vulnerabilities in the coronavirus environment.

Perhaps, there is a requirement for all services to integrate this unseen threat into our operational plans either through software, simulations or standard operating procedures, such that the services can undertake their tasks unhampered.