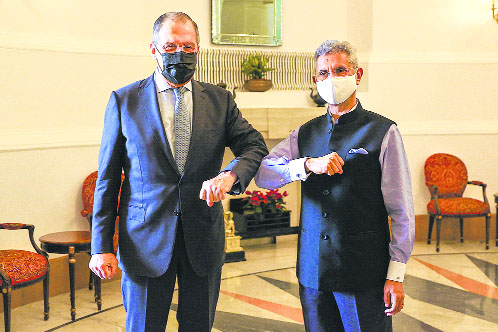 Friends Forever: Sentiment and emotion, reminiscent of the Soviet era, are still high on the Indo-Russian agenda. Reuters

The second half of 2021 will be a period of Russia and India, in terms of diplomatic activity in New Delhi. The year 1971 was the story of the Treaty of Peace, Friendship and Cooperation between India and the Soviet Union. In three weeks, there will be celebrations in Moscow and in New Delhi marking the golden jubilee of the signing of that historic document.

Indians engaging Russians in government or outside will never hear questions in Moscow such as ‘are you with us or against us’.

PM Modi and Russian President Putin have recently agreed to set up a new mechanism for taking down any cobwebs in mutual engagement: a 2+2 ministerial forum, which is now a familiar structure in many bilateral relationships worldwide, and has proved productive. The first such meeting of Russian and Indian foreign and defence ministers will convene shortly.

Inter-governmental commissions worked well in the Soviet era in advancing Moscow’s ties with New Delhi. They were effective institutional structures in government-to-government relations after the 1971 treaty took Indo-Soviet ties forward. Ministerial meetings of the commission will take place in the second half of this year and focus on defence, economy and trade.

All this is in preparation for Putin’s visit to India later this year, taking into account what Russia’s Deputy Chief of Mission in India, Roman Babushkin, calls ‘epidemiological considerations’. Optimism is high that the Putin-Modi summit will take place this year in person.

If that happens, Putin’s will be the first high level, big power visit to New Delhi since Covid-19 descended on various countries. The chance to bag that spot was to have belonged to British PM Boris Johnson as Republic Day guest, but he cancelled his travel plans after a variant of coronavirus spread in the UK around that time.

All this makes up a full plate as far as bilateral events go, but there is a lot more in the pipeline which puts Moscow at the front and centre of New Delhi’s diplomatic calendar for the remainder of 2021. Next month, India will assume the presidency of the UNSC. The council’s President-designate, TS Tirumurti, has begun coordinating with Russia’s Permanent Representative to the UN, Nebenzia Vassily Alekseevich, on how to advance a multipolar agenda.

External Affairs Minister S Jaishankar is now chair of the Russia-India-China trilateral cooperation mechanism, better known as RIC. Jaishankar intends to convene a meeting of RIC foreign ministers in New Delhi in September. India also currently holds the presidency of BRICS. The BRICS leaders, according to present plans, will hold their 13th summit in India in September.

Before all this happens, Russia and India are expected to complete the process of mutual recognition of each other’s certificates of vaccination against Covid-19. Sputnik Lite, the single-dose Russian vaccine, would have arrived in India by then. Expanding partnerships to manufacture Sputnik V vaccine in India would have also made bilateral vaccine cooperation widespread by year-end. All this will lay the ground for a revival of people-to-people interaction that lost steam when the Soviet Union collapsed.

Sentiment and emotion, reminiscent of the Soviet era, are still high on the Indo-Russian agenda, as Russian-speaking Jaishankar’s three-day visit to Moscow this month showed. He chose the nearly century-old Institute of World Economy and International Relations of the Russian Academy of Sciences (IMEMO) for his only public engagement, although several platforms were offered to him. He chose this venue as a tribute to Yevgeni Primakov, whose contribution to India’s robust defence preparedness and strategic stability during the years when the Soviet Union unravelled, will only be revealed when top-secret documents of that period are declassified, if ever. Primakov, the first head of the Soviet spy agency KGB’s successor, the Foreign Intelligence Service, was Russia’s PM when India tested its nuclear weapons in 1998. He was associated with IMEMO from 1970 till his death six years ago.

With so much of Russia on India’s diplomatic calendar for the rest of this year, an oft-repeated question is bound to pop up again: ‘What is Russia’s relevance for India?’ In the last two decades, India became attractive for the entire world because of its economic opportunities and on account of its emergence as an important global power. The latest conclusive evidence of this status was India’s election to the Security Council with a huge majority a year ago. On both these counts India is now facing challenges.

Jaishankar stressed in his IMEMO speech that what India and Russia ‘have in common is a clear sense of national interest and a strong sense of national resolve. We have dealt with each other long enough to know that these qualities are very much part of our basic character.’ As India’s foreign and economic policies face questions, which were presumed to have gone away over two decades ago, it is important to remember a critical point: Indians engaging Russians in government or outside will never hear questions in Moscow such as ‘are you with us or against us’.

Unlike some other familiar countries, Russians do not have an attitude of entitlement from Indians, despite the massive support they have given India since Independence in every sphere. History has taught us that Russians will not foment a ‘colour revolution’ in India. Nor will they seek regime change through interference in India’s sovereignty. That cannot be said with any certainty about many other countries, which are supposedly New Delhi’s friends. None of India’s other friendships has shown the strength of resilience in relations with Russia.

‘The paradox, though, is that precisely because it has held so steady, this relationship is sometimes taken for granted. The case for its constant nurturing is therefore as powerful, if not more, than with the more volatile ones,’ Jaishankar said. That is what his ministry is preparing for in the remaining months of this year.

The PM was addressing the India-Asean Summit virtually