Together with hardening of anti-China sentiments in the UK, Australia, India and Germany, Japan’s moves could be useful to Washington as it supports the biggest US military base with about 50,000 military personnel. These countries could add decisive new capabilities to counter China. If China knows that the strategic balance is clearly in favour of the US and its allies, it would not attempt a military capture of Taiwan or other disputed territories. 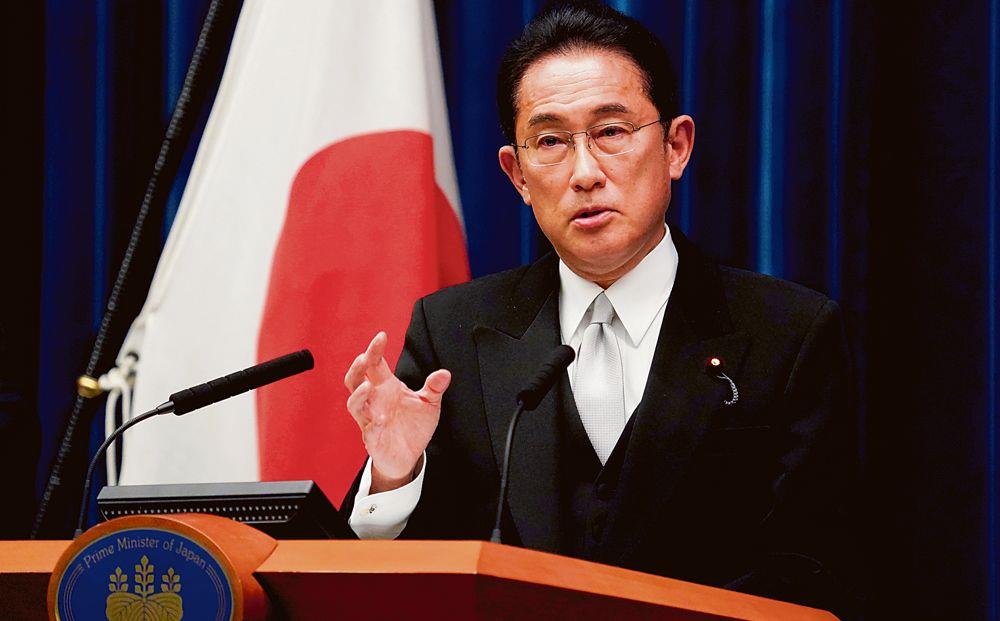 On edge: Japanese PM Fumio Kishida is worried over the security situation. Reuters

At his first troop review on November 28, Japanese Prime Minister Fumio Kishida said the security situation around Japan had rapidly changed with North Korea test-firing missiles with advanced capabilities and China pursuing a military build-up and increasingly assertive activity in the region. He vowed to create a stronger Self- Defence Force (SDF) and consider all options, including acquisition of “enemy base strike capability”. Japanese Defence Minister Nobuo Kishi has spoken recently on the need for a US-Japanese plan in case of a Chinese aggression against Taiwan.

These statements mark a considerable shift in Japan’s stance considering that the former Japanese PM Yoshihide Suga, after his meeting with President Biden in April 2021, had stated categorically “there was no possibility of the Japanese forces being committed to any military contingency surrounding Taiwan.”

There are several reasons for this dramatic change in Japan’s position. First, the escalation of missile race in its neighbourhood with South Korea testing its first submarine-launched ballistic missile, North Korea testing advanced long and short-range missiles and most importantly, China testing a nuclear capable hypersonic missile (which can’t be intercepted by the present anti-ballistic missile shield).

Second, there has been sharp expansion in joint military activities by China and Russia near the Japanese waters and air space. Recently, two Chinese H-6 and two Russian Tu-95 bombers flew from the Sea of Japan to the East China Sea, triggering the Japanese SDF to scramble its fighter jets. Similarly, a joint task force comprising five Chinese destroyers, frigates and five Russian destroyers and missile tracking ships passed through the Tsugaru Strait, separating the Japanese island of Honshu from Hokkaido.

The Chinese coast guard boats made 333 incursions in the Japanese territorial waters off the Senkaku islands in East China Sea in 2020. China has now authorised its naval vessels to fire on the foreign vessels to deter them in the disputed territories.

Third, US President Biden recently asked Japanese PM Kishida to increase its defence expenditure. Defence Minister Nobuo Kishi has stated that the “US was no longer in a position to underwrite the Pacific security in the way it had done since World War II” and Japan had to assert itself militarily to fill the void due to America’s decline.

Even before his election, PM Kishida had underscored the challenge that China posed to Japan’s security and said that he would support doubling the share of Japan’s military spending (which was less than 1% of GDP) to increase its offensive capabilities. On November 26, he announced an additional defence spending of $6.7 billion, expanding the total defence budget for 2021 to $53 billion. Additional sums would be used to buy advanced Patriot missile defence system, surface-to-air missiles, maritime patrol aircraft, mines, torpedoes and multi-role helicopters.

Japan aims to scale up its capabilities in the outer space, electronic warfare, cyberspace and other emerging technologies to counter China’s military modernisation.

Recognising that its security imperatives are now twined with regional stability, Japan is playing an active role in building the defence capabilities of countries in South East Asia and India. It has signed defence cooperation and technology transfer agreements with Vietnam, Singapore, Indonesia, the Philippines, India and Australia. Strengthening Japan’s domestic military industry and diversifying its defence partners are also on the government’s agenda.

In its 2021 Annual White Paper on Defence, Japan has described “Taiwan as important for Japan’s security and stability of the international community” and cross strait tensions as requiring a “sense of crisis”. China’s control of Taiwan would augment its economic, technological and military prowess and bring its forces within 100 km of the Japanese territory and threaten key maritime trade routes, which supply Japan with oil and other goods. Former Japanese PM Shinzo Abe, who still has considerable influence within the ruling party, recently stated that Japan and the US could not stand by if China attacked Taiwan and Beijing needs to understand this.

While Japan’s official and legal policies toward Taiwan have not changed, the ruling Liberal Democratic Party launched party-to-party talks with Taiwan’s Democratic Progressive Party in August, 2021. The hardening of Japan’s position on China and its support of Taiwanis is causing deep resentment in Beijing; the latter is accusing Japan of using the Taiwan issue to break its pacifist Constitution and assisting her in manufacturing stealth submarines. The Chinese officials have said that they would not allow Japan to earn huge profits from its market and threaten its national security and sovereignty at the same time, a contention they are observing only in breach with respect to India and other neighbouring countries.

The hardening of Japan’s attitude towards China is evident in the perceptions of the Japanese people too. The recent opinion polls by a Japanese think tank, Genron NPO, Nikkei and TV Tokyo reveal that a large majority of respondents had negative impression of China and favoured active Japanese engagement “towards stability in the Taiwan Strait”. With the Japanese public getting increasingly sceptical of China in view of its accelerating military provocations, the hardline stance is likely to grow in influence.

Former PM Shinzo Abe had expanded the definition of Article 9 of Japan’s Constitution to include “collective self-defence of partners”; this could provide justification for Japan’s military actions to defend partner countries if public opinion and strategists supported such a move.

Together with hardening of anti-China sentiments in the UK, Australia, India and Germany, Japan’s moves could be of great support to Washington as it supports the biggest US military base with about 50,000 military personnel. These countries could add decisive new capabilities to counter China’s rapid build-up of naval ships, submarines, strategic bombers, missiles, space, electronic warfare and emerging technologies. If China knows that the strategic balance is clearly in favour of the USA and its allies, it would not attempt a military capture of Taiwan or other disputed territories.