Cops did not require the VC’s permission to enter Jamia Millia Islamia because the law empowered them to do so, but insisted on it when 50-odd thugs, armed with lethal weapons, entered the JNU campus in their presence! 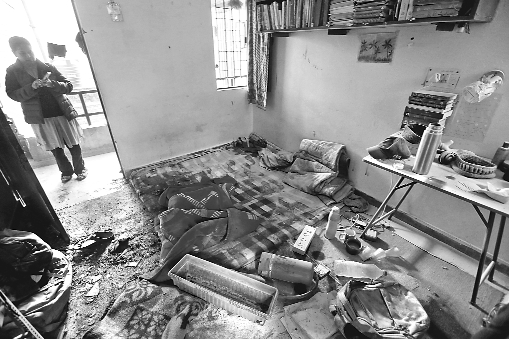 On a rampage: Three hours of unopposed licence to riot was given to the miscreants.

ON the night of November 9 and 10, 1938, Nazi goons went on a rampage in Berlin, and other German cities and towns, destroying property, and thrashing Jews. That night came to be known as “Kristallnacht”. It heralded the arrival on the political scene of Adolf Hitler, whose National Socialist Party soon came to power and propelled Hitler to the Chancellorship of the German Republic.

The abhorrent scenes we saw on television on January 5 this year reminded me of Kristallnacht, but with one crucial difference. Whereas the German happening helped the Nazis to gain politically in Germany, the JNU happening will have the opposite effect on our rulers! This is my gut feeling based on drawing-room conversations following the event.

The rollercoaster that the Modi-Shah duo was riding first showed signs of mechanical defects when Amit Shah loudly and confidently proclaimed outside Parliament on various platforms and then in Parliament itself that the NRC would follow the CAA and that it would be applied to the entire country! This caused panic — and simultaneously resentment — in the Muslim community.

In Uttar Pradesh, in particular, and other states in North India a syncretic culture with Islamic ingredients has been in existence for years following the arrival of the Mughals. It was not only the Muslims who revolted but also many armchair liberals, Left-leaning Hindus and that important segment of civil society, the ‘pseudo-secularists’. But even more significantly, the young generation which Mr Modi had specifically and correctly targeted, was repelled by the blatant challenge of the ruling dispensation to the Constitution of India.

The youth was further enlightened of the true nature of its government when the Delhi Police entered Jamia Millia Islamia in the nation’s capital and wreaked havoc in its hostels and library on the pretext that intruders had entered the university campus and needed to be identified and ejected. But without any pretence to identify outsiders, they beat up one and all, the victims largely students.

The police that did not require the Vice-Chancellor’s permission to enter Jamia Millia because the law empowered it to do so when life and property was endangered insisted on this permission when 50-odd thugs, masked and armed with lethal weapons, entered the JNU campus in their very presence! The entire country saw the goons on television beating up students and destroying property, but the Delhi Police still waited and waited!

The Vice-Chancellor and his senior aides in the management were conspicuously absent. Finally, three hours of unopposed licence to riot was given to the miscreants! Seven hundred policemen marched into the campus only after the goons had mysteriously vanished! The police issued a statement that echoed the JNU administration and the ABVP, the student wing of the BJP, blaming the Leftist student union for the disturbances.

Three separate statements, but on strikingly similar lines, smacked suspiciously of connivance. Even if the police swear that they were not complicit, how can they absolve themselves of the charge of rank incompetence? The Deputy Commissioner’s office was located just opposite the main gate of the university campus. Policemen were on duty at the gate!

Personally, I do not think that the Delhi Police is incompetent. I know it is not. It had chosen to close its eyes to please its political masters! The Delhi Police operates and functions directly under the Union Home Ministry presided over by none else than Amit Shah. Can the Home Minister absolve himself and his police of the blame?

Aware of these linkages, students all over the country are protesting and revolting. The rollercoaster is facing more mechanical troubles than it can set right! If the agitation and protests continue, the ruling party will have tied itself into a Gordian knot of its own making.