Rift in CCP over Xi’s policies on US, Russia

In the first detailed justification of China’s support to Putin, the article is categorical that “Russia’s special military action against Ukraine can be regarded as a prelude to resist US hegemony and build a fair and just new international order”, adding that this highlights “Putin’s respectability and this war”. It assesses that the US would now concentrate on weakening Russia and ‘strangling China’. 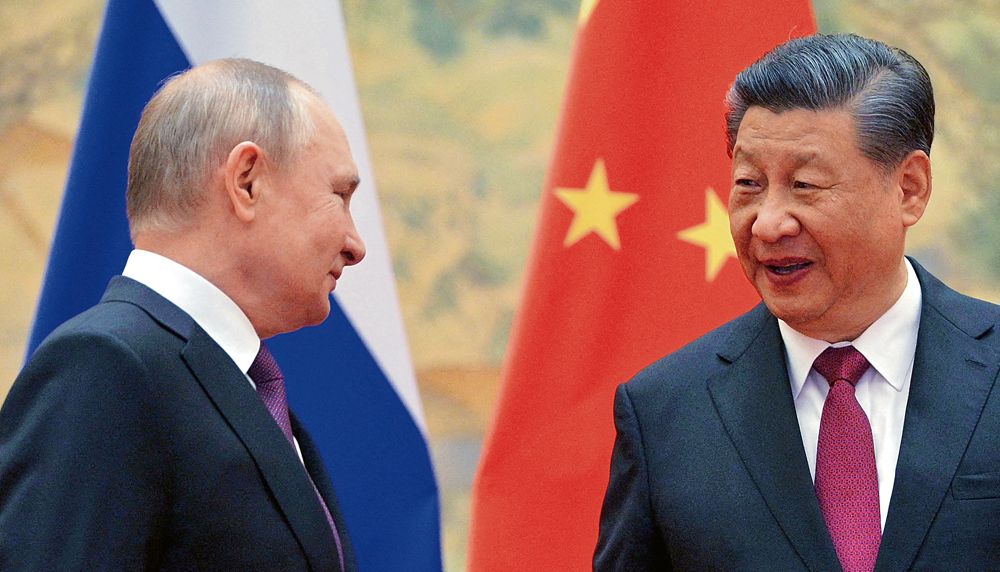 Concern: With no sign of the Ukraine-Russia war ending, some top echelons of the CCP apprehend that the US will impose sanctions on China. Reuters

Signs of obvious disagreement inside the top echelons of the Chinese Communist Party (CCP) on China’s policy towards the United States and the stance on the war in Ukraine are discernible. With no sign of the war ending, concern among Chinese communist cadres about the high possibility of the US imposing sanctions against China is mounting. Disregarding that Chinese President Xi Jinping unequivocally backed Russian President Putin at their summit on February 4, Chinese cadres have risked possible punishment and, since the end of February, posted criticisms on popular Chinese social media outlets.

Intriguing in this backdrop is the publication, after an inexplicable delay, on April 30 by the official Xinhua news agency of its interview with Ukraine’s Foreign Minister Dmytro Kuleba! In the interview, Kubela argues his case against Russia, calls the war detrimental to China’s BRI, and proposes that China could be a guarantor of its future security. No English version has yet been noticed.

These six months before the crucial 20th party congress, where Xi intends to secure a third term at the helm, are vital for him. Xi’s opponents could seize the opportunity offered by the growing apprehension of US sanctions, which have the potential to directly adversely impact nearly 300 million Chinese Communist Party (CCP) members. The other factors adding to popular dissatisfaction are the rising living cost, high unemployment, slowing economy and acute distress caused to citizens by the “zero Covid” policy implemented under Xi’s instructions. More than 340 million people in the regions that contribute to about 35 per cent of China’s GDP, including Beijing, have been affected by Covid-related lockdowns. The breakdown in logistics has accentuated distress and impacted China’s exports.

Xi now appears to have decided to counter this criticism. The head of the People’s Daily, Sichuan branch, Lin Zhibo, on April 24 posted a lengthy 6,455-character article titled ‘The Russian-Ukrainian conflict and our position’ on the widely read Chinese portal Weixin. It is the first detailed justification of China’s support to Putin. While it justifies Russia’s invasion of Ukraine, it concedes that the Russian army had made poor progress and attributes this to the underestimation of Ukraine’s strength and Putin receiving only “one-sided information”, which is “unfavourable and even dangerous for strategic decision-making.”

The article is categorical that “Russia’s special military action against Ukraine can be regarded as a prelude to resist US hegemony and build a fair and just new international order,” adding that this highlights “Putin’s respectability and this war”. It assesses that the US would now concentrate on weakening Russia and “strangling China” to “maintain its world hegemony". The article asserts that “Time will prove that Russia’s special military operation is beneficial to China and the world.” It explains that Russia has alleviated the strategic pressure on China, extended China’s “strategic opportunity” and enhanced its “economic and comprehensive influence”.

It lists the benefits to China as: the freeing up of markets in Russia, closer Sino-Russian relations, de-dollarisation and internationalisation of the RMB, US-India relations cooling down with the “possibility of improving Sino-Indian relations”, the weakening of Europe and enhancement of China’s influence among developing countries and “the Ukraine conflict providing China with experience and lessons in resolving the Taiwan issue and how to deal with sanctions.” It claims that “the confidence of “Taiwan independence” forces in the US “are declining.” It dismisses as “wishful thinking” the US ambition of uniting “allies to strangle Russia, and then concentrate its efforts on encircling and suppressing China.”

The article warns that if the Russian army failed to perform, Putin would become ineffective and “pro-American forces will seize Russian power”, which China “absolutely cannot allow”. It asserts that the US strategy is “containing and strangling China, not allowing China to become strong…. We should not have illusions about its malicious intent”. It ends with the exhortation that China “must pay attention to the enemy tactically, study the United States as a real tiger carefully, and prepare for military and all-round struggles” and “launch a great struggle”.

Reinforcing the acute concern of the CCP’s upper echelons, an institute affiliated to the People’s Liberation Army (PLA) has also, for the first time, been noticed publishing an article justifying the war on Ukraine and its potential impact on China. Published on April 29, and captioned ‘Learning to live under the containment of the West — Influence and Enlightenment of the Ukraine War’, the article by Zhang Zhikun, Senior Researcher of Kunlun Policy Research Institute, is very critical of the US.

It asserts that that the international order is actually the result of a “violent, barbaric and bloody colonial expansion of Western countries” and that “in the coming period, the United States and the West will focus on how to oust Putin and create various political ‘revolutionary’ movements in Russia” and undermine Russia’s periphery. Zhang Zhikun asserts that the US strategy “is to weaken Russia and contain China at the same time”. He anticipates that “China’s relations with Western countries will become more precarious, and close economic and trade ties, personnel exchanges, financial ties, etc... may be broken at any time.” Underlining that an “all-round containment’ of China by the “hegemonic bloc” is inevitable, he emphasises that “sanctions and blockades of China may happen at any time.” He exhorts “all patriotic Chinese” to shed illusions about the United States and the West, and eliminate their dependence on Western blocs, including in all key technologies.

That the CCP has chosen to justify its support to Putin and the Russian invasion of Ukraine two months after the commencement of the war is significant. It suggests that inner-party opposition has increased. The justifications have thus far appeared in CCP- and PLA-affiliated outfits.