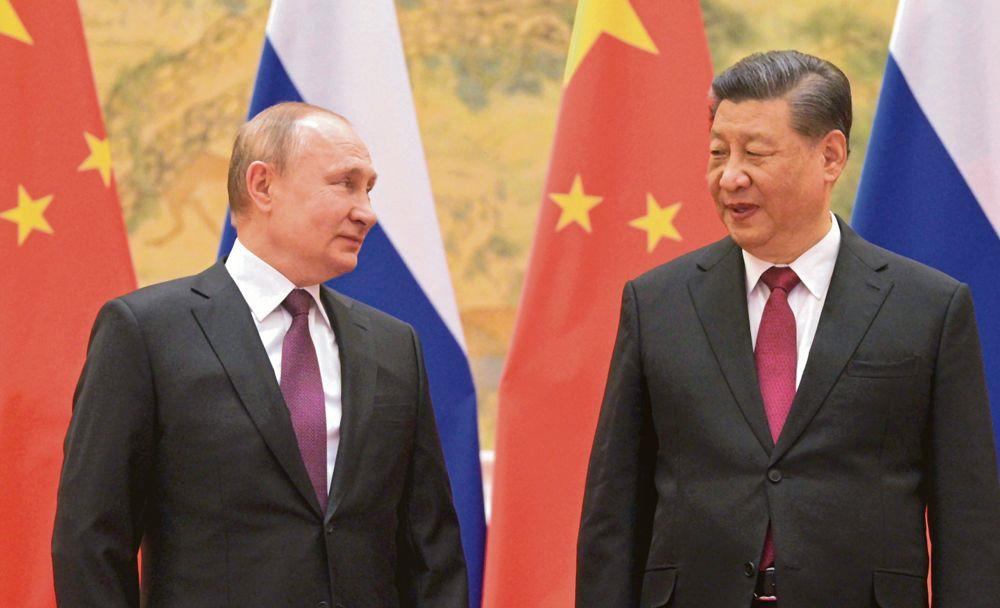 Trade-off: While China is backing Russia’s position on Ukraine, Moscow is supporting Beijing on Taiwan. AP

It is an important axiom in foreign policy that you do not provoke an adversary on an issue in which the latter has greater stakes than you do. This applies even in a situation where the adversary is less powerful. This was demonstrated earlier in the case of Georgia and later in the occupation and incorporation into Russia of Ukraine’s Crimea. In neither case were the US and its western allies prepared to go to war to prevent Russian aggression. In the events leading up to the Crimean crisis in 2014, the US supported an anti-Russian movement, the so-called Maidan revolt in the Ukrainian capital Kiev, but failed to resist Russian resort to arms in retaliation, in Ukraine’s Donbas region populated mainly by ethnic Russians. Economic sanctions can only take you so far. A similar situation has arisen in the latest crisis in Ukraine, with Russia having deployed more than 1 lakh troops along that country’s borders. Russia is demanding ‘legal guarantees’ that there will be no further expansion of the EU or NATO towards the east. Neither the EU nor NATO have any plans to admit Ukraine in the foreseeable future but do not want, as a matter of principle, to be seen formally conceding to Russian demands. The danger of a military offensive against Ukraine, therefore, remains a distinct possibility whose aim may be to replace the current government in Kiev with a pro-Russian alternative.

India may have to think of other ways to prevent a China-dominated Asia becoming an uncomfortable reality.

One may witness a similar scenario unfolding in the Indo-Pacific in the context of China’s increasingly aggressive and threatening moves against Taiwan, which it considers a renegade province which must eventually be united with China. A prominent Chinese political scientist, Jin Canrong, recently declared that a military offensive to unify Taiwan may be unavoidable and may take place by 2027. He also asserted that China had enough capabilities to defeat any US attempt to intervene militarily.

The question is whether the US would intervene to prevent a Chinese take-over of Taiwan? Does China have a greater stake in the Taiwan issue than the US? The answer is yes. The US says it has a policy of ‘strategic ambiguity’, that is, it will leave China guessing whether it will intervene or not, and hope this will deter Chinese action. But strategic ambiguity signals that the issue is not so important to US security as to demand a clear commitment to Taiwan’s defence. There is a certain parallel, though not an identical situation, here compared to the Ukraine crisis. And to take on two adversaries both with greater stakes in these outstanding issues than the US does, might be a strategic miscalculation on the latter’s part.

It is against this background that one should analyse the joint statement issued at the close of the Putin-Xi summit on February 4. It signals a significant geopolitical shift, with Sino-Russian relations moving towards a deeper security alignment, with each anticipating a potential payoff in respect to what they consider their ‘core interests’.

The language of the statement is indicative of this shift. To state that ‘friendship between the 2 countries has no limits, there are no “forbidden” areas of cooperation’ is unprecedented and sweeping and should not be dismissed as rhetoric. Alexander Gubanev of the Carnegie Centre in Moscow has observed: ‘It looks like the most sensitive areas of cooperation have been moved into stealth mode. They are the underwater part of the iceberg.’

China has made an important shift in its policy towards Europe and this is reflected in the support it has voiced for Russia in its current confrontation with the US and western Europe over Ukraine. Contrast this with China’s discomfort over Russian invasion and occupation of Crimea in 2014. It abstained rather than vote against a UN resolution condemning Russia on the violation of Ukraine’s sovereignty and territorial integrity. China had been careful not to get involved in Russia’s confrontation with Europe but this has changed. In their joint statement, China has, for the first time, joined Russia in opposing the enlargement of NATO but stopped short of opposing the enlargement of the EU which is included in Russian demands. While Ukraine has not been named, China declares that it is ‘sympathetic to and supports the proposals put forward by Russian Federation to create long-term legally binding security guarantees in Europe.’

Russia, in return, has supported Chinese positions on Taiwan and against Quad, AUKUS and the US Indo-Pacific strategy. It has, however, stopped short of endorsing Chinese claims in the South China Sea. There is a quid pro quo apparent here. Both Russia and China sense that the current geopolitical scenario offers them an opportunity to undermine the US and western dominance of the international order and reshape it in line with their own interests. There are several opening paragraphs which dwell upon the notion of democracy, contesting the western version of a liberal democracy. There is clearly a meeting of authoritarian minds on this question!

These latest developments will shrink India’s room for manouevre and call into question its assumption that Sino-Russian alignment is mostly tactical; that growing Chinese influence in Central Asia and eastern Europe is what threatens Russian interests in the latter’s ‘near neighbourhood’ and that this would put a limit on how far Sino-Russian relations could advance. We need to revisit these assumptions.

Should the Russians in Ukraine and the Chinese in Taiwan succeed in asserting their ‘core interests’, the credibility of the US, including its Indo-Pacific strategy, will be severely undermined. This will call into question the efficacy of Quad as a countervailing coalition. India may have to think of other ways to prevent a Chinese-dominated Asia becoming an uncomfortable reality. Several other major powers in the region will confront similar dilemma and India should engage with them to manage an altered geopolitical landscape in our region.