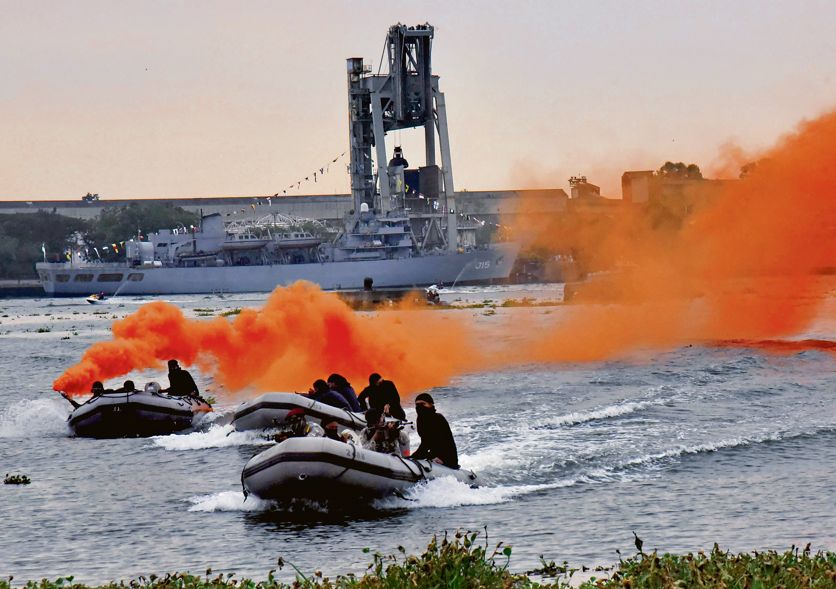 BUOYING UP: The encouraging news is that the Navy’s share of the Defence Budget has moved up to 17.8 per cent this year. PTI

NAVY DAY is celebrated on December 4 to commemorate Operation Trident — the missile boat attack on Karachi harbour in the 1971 War for the liberation of Bangladesh — and this year, the annual event was distinctive, for it was held outside of Delhi. This is a departure from earlier practice for the Indian military, wherein individual service days are celebrated in the national capital with the President, Vice-President and Prime Minister gracing the occasion. President Droupadi Murmu was received in Visakhapatnam, HQ of the Eastern Naval Command, on December 4 with customary pomp and tradition.

China’s resolve to enhance its footprint in the IOR remains robust and India will have to evolve responses that will be effective and sustainable in the long term.

Given the ceremonial nature of the occasion, it was appropriate that the President dwelt on India being ‘inherently a maritime nation’ and added that the oceans and seas lapping the peninsula would play a vital role in India’s growth and prosperity in the years ahead. She also expressed her confidence that the Navy would grow from strength to strength, even as it pursued the vision of ‘Atmanirbhar Bharat’.

However, for India to realise its untapped maritime potential and enhance its naval capability, the many challenges that lie ahead need to be objectively identified. Some of these strands were reflected in the media interaction of the Naval Chief, Admiral R Hari Kumar, as also in certain regional developments related to the Indian Ocean.

Two significant observations of Admiral Kumar frame the nature of the challenge for the Navy in the near future. Lauding the commissioning of the nation’s first indigenously designed and built aircraft carrier, IAC 1, INS Vikrant, in Kochi shipyard, the Naval Chief disclosed that the next carrier would, in all probability, be a ‘copy’ of this 40,000-tonne vessel and not the larger 65,000-tonne IAC 2 that had been earlier envisaged.

Whether this reduction in the size of the next carrier has been impelled by fiscal considerations or reasons more professional is moot but the extrapolation is evident. The Navy will have to make its plans around relatively smaller platforms (40,000 tonnes) and this would have a bearing on the quality and quantum of air power that India can bring to bear in the Indian Ocean in the first instance and other maritime domains — depending on the exigency that may arise, which will warrant such a demonstration of trans-border military power by India.

The encouraging news that Admiral Kumar shared was that the Navy’s share of the Defence Budget moved up to 17.8 per cent this year, and furthermore, the revenue to capital expenditure ratio was at a healthy 32:68, which, he added, ‘accords us flexibility in pursuing our capability development plans’.

To remain credible, navies need sustained platform induction and in the absence of a holistic acquisition package in the appropriate temporal cycle, optimum combat efficiency is impaired. This gap is discernible in relation to INS Vikrant and will also affect the second carrier as and when it is commissioned.

The credibility of an aircraft carrier is determined by its fighter aircraft and in the case of Vikrant, the current MiG-29K is not the most viable choice. This Russian-origin aircraft was not designed for deck landing and is more of an interim measure, even as the Navy is examining other options. Admiral Kumar indicated that the marine version of the French Rafale and the US F/A-18 Boeing have been evaluated and that a decision would be taken in the matter. Given the long lead time associated with Indian military acquisition decisions, it is likely that INS Vikrant will be operating below optimum combat levels pending induction of the Rafale or the F/A-18.

Reiterating the Navy’s commitment to atmanirbharta or indigenisation, the Naval Chief also added that the first prototype of the indigenous Twin-Engine Deck-Based Fighter would be ready by 2026 and induction expected by 2032 — a decade from now. Given the current status of the Indian fighter aircraft programme, this is an ambitious timeline and few nations have been able to produce a truly indigenous fighter in less than 15 years.

Conceding that there have been delays in the indigenous submarine building programme (project 75I), Admiral Kumar made reference to the ‘complex acquisition process’ and the challenges of satisfactorily implementing the newly formulated strategic partnership model, which seeks to encourage and nurture for the long term Indian private industry participation in major military programmes.

In summary, this candid review of the Navy’s current acquisition plans when added to the legacy gaps (such as minesweepers) would point to a less-than-adequate force level. This is unfolding against the backdrop of the Chinese navy forging ahead and overtaking the US navy to become the world’s largest navy.

China’s plans to enhance its footprint in the Indian Ocean was on display in a mid-November event, wherein it hosted a 19-nation China-Indian Ocean Region (IOR) Forum at Kunming in the south-western Yunnan province. Predictably, India was not invited. The level of participation remained opaque and nations like Australia and the Maldives later clarified that there was no official representation and those nationals of their countries who attended the forum did so in their personal capacity.

Be that as it may, China’s resolve to enhance its footprint in the IOR remains robust and India will have to evolve responses that will be effective and sustainable in the long term. The gaps in the naval quiver need to be redressed in a calibrated manner, such that they harmonise with India’s composite trans-border military capability that would be relevant for a nation that will soon become the world’s third largest economy.