Russian President Putin acknowledged that China had some ‘concerns and questions’ over the Ukraine war and promised to answer them. China’s President Xi Jinping claimed that China had fulfilled its responsibility as a major country by ‘injecting stability into a turbulent world’. While maintaining the façade of their united front against the US, both Beijing and Moscow are quietly limiting each other’s influence in their backyard. 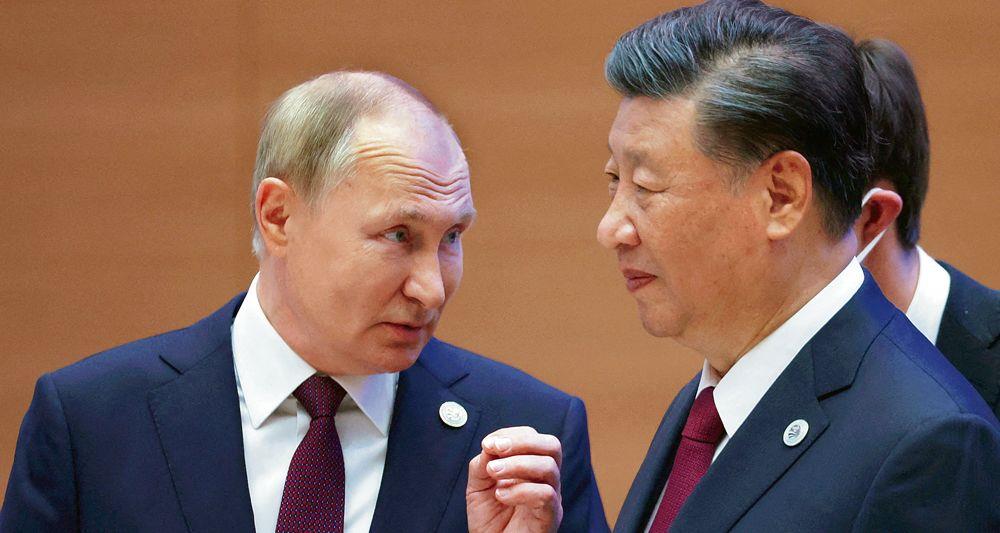 Subtle shift: China has not been happy at the resulting turmoil from the Ukraine war in the global energy and food market, which has hurt its economic growth. Reuters

The 22nd Shanghai Cooperation Organisation (SCO) summit concluded on September 16 after adopting the 121-point Samarkand Declaration, renewing the desire of its members for a “more representative, democratic, just and multipolar world” based on international law, multilateralism, equal and common security, civilisational diversity and the central role of the UN, where both Russia and China have a veto on decision-making. Several members are not happy with the current international order, which they perceive as being dominated by the US and its allies.

The SCO was set up in 2001 and comprises eight members — China, Russia, Kazakhstan, Uzbekistan, Kyrgyzstan, Tajikistan, India and Pakistan. Iran will be joining as the ninth member next year. The summit was attended by 14 leaders from these countries and observer states such as Afghanistan, Belarus, Iran and Mongolia and dialogue partners such as Azerbaijan, Armenia, Cambodia, Nepal, Turkey and Sri Lanka. Its secretariat is based in Beijing.

The SCO is a loose grouping and cooperation is promoted often by the interested member states. In some areas, including startups and innovation, poverty reduction and traditional medicine, the summit decided to set up special working groups to promote deeper cooperation. Similarly, it has set up the Regional Anti-Terrorist Structure in Tashkent to advise on countering terrorism, separatism and extremism.

In the declaration, Kazakhstan, Kyrgyzstan, Russia, Tajikistan, Pakistan and Uzbekistan supported China’s One Belt One Road Initiative (OBOR) and acknowledged the ongoing work to link the Eurasian Economic Union (piloted by Russia) and the OBOR.

It stressed that the unilateral application of economic sanctions (imposed on Russia and China by the US and others) was inconsistent with international law and encouraged the use of national currencies for trade and economic development. The summit was, however, marred by several dissensions and divergences among members. Russian President Vladimir Putin acknowledged that China had some “concerns and questions” over the Ukraine war and promised to answer them. China’s President Xi Jinping claimed that China had fulfilled its responsibility as a major country by “injecting stability into a turbulent world.”

China has not been happy at the turmoil resulting from the Ukraine conflict in the global energy and food market, which has hurt its economic growth. While Beijing has given limited political and economic support to Russia by purchasing its oil, gas and other items, it has avoided supplying any weapon to Russia, at least openly, for fear of attracting sanctions.

Xi sent a Politburo member, Li Zhanshu, to Russia to attend the seventh Eastern Economic Forum at Vladivostok in early September instead of going himself, which would have signalled direct support to Putin at a crucial time in the Ukraine war. Similarly, before meeting Putin in Uzbekistan, Xi travelled to Kazakhstan, which has taken an independent stand on the Ukraine issue. China signed a new agreement with Kyrgyzstan and Uzbekistan to establish an alternative rail link for its overland transit to Europe, independent of Russia.

China has tried to balance its commitments to Russia and the states of Central Asia (CA) as the latter want to diversify their cooperation; similarly, Russia has tried to moderate China’s growing influence in the CA by encouraging other countries to expand their economic, investment, educational and other linkages. While maintaining the façade of their united front against the US, both Beijing and Moscow are quietly limiting each other’s influence in their backyard. Xi avoided the mask-free SCO dinner on September 15 to convey respect for his zero-Covid-19 policy.

There was a lot of signalling by India, too, as Prime Minister Narendra Modi attended the SCO summit in the company of Putin and Xi, two of the main adversaries of the US. First, India hosted the Quad senior officials’ meeting together with the India-US two-plus-two inter-sessional meeting in New Delhi a few days before the SCO summit to discuss China’s growing aggression in the Indo-Pacific, food, health security, Covid-19 challenges, Ukraine war and other issues. Second, the PM’s visit to Uzbekistan was cut short, skipping the leaders’ dinner on September 15 and reducing it to a working visit. Third, no meeting was sought with the Chinese President, conveying India’s unhappiness at his violation of the written agreements on respecting India’s territorial integrity.

In the televised remarks, Modi told Putin that “today’s era is not an era of war” and he should seek an early solution to the Ukraine conflict through “democracy, diplomacy and dialogue.” He highlighted the shortages and sckyrocketting prices of food, energy security and shortage of fertilisers that had bedevilled the world, especially the developing countries. However, Modi also brought warmth into the discussions by referring to the traditional friendly ties between the two countries and promising that India and Russia would work together in trade, energy, defence and other sectors. The PM’s references to the progress made by India in innovation, startups, need for resilient and diversified supply chains (another pointer at China) and better connectivity between South and Central Asia were reflected in the declaration. India has now taken over SCO’s chairmanship.

An isolated China was most upbeat about the outcome of the summit, calling the SCO a “constructive force” that could immensely contribute to regional cooperation in the face of the growing “cold war mentality, group politics with formation of small cliques, unilateralism and protectionism.” It noted that several important states such as Bahrain, the UAE, Kuwait, Saudi Arabia, Egypt and Qatar and others were seeking dialogue partner status with the SCO. However, the progress in the SCO continues to be hampered by lack of connectivity and  differences among its members on the issues of terrorism, territorial integrity, connectivity (transit rights between India and Pakistan for Afghanistan) and economic development. Unless the members overcome these differences and earnestly seek wide solutions, the SCO’s full potential as a regional organisation will remain under-harnessed.