The Centre must provide free jab, and soon, if we have to beat Covid 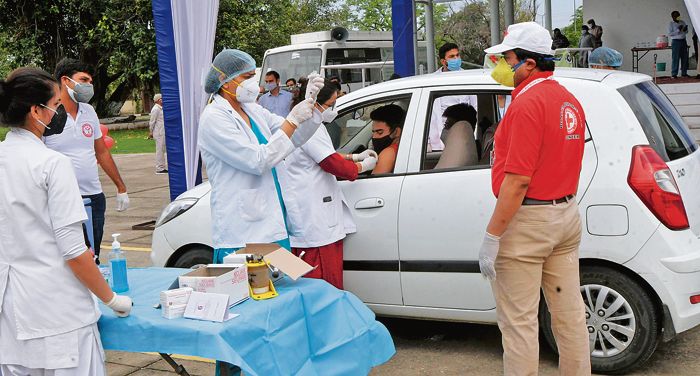 Long way: Barely 10 per cent of the population has received the first dose, and less than 3 per cent is fully inoculated. Tribune photo

THE Covid-19 pandemic continues to be a nightmare. People are inundated with never-ending, depressing news of the widespread suffering and death of near and dear ones, neighbours and colleagues. The Covid war has become heartrending. There is a feeling of despondency and helplessness all around. A common person is not interested in the political blame game. The only question on his mind is whether this nightmare is going to end. Much can be said about the mismanagement of the Covid catastrophe but I propose to restrict this article to only the most critical aspect, namely, the imperative of universal vaccination in

Scientists are warning of not just a third wave but a succession of waves. The frightening projections of persons likely to be affected daily range from 4 lakh, which we have nearly reached, to 1 million cases. The ever-changing mutations of the virus are adding new dimensions to the gigantic problem. There are fears that unless urgent steps are taken, India is likely to go the Brazil way in terms of the spread and continuance of the epidemic.

The overall positivity rate in the country is now 21 per cent. As many as 533 out of the total of 718 districts are showing a positivity rate of over 10 per cent. While more than 60 per cent of Covid cases were from the rural and semi-rural districts, only about 12-15 per cent of the inhabitants had received one dose of the vaccine by May 14, 2021. In contrast, an estimated 30 per cent inhabitants in urban and 19 per cent in semi-urban areas have received at least one shot. As for India’s whole population, barely 10 per cent has received the first dose, and less than 3 per cent is fully inoculated. Thus, we have a long, long way to go.

According to the union Health Ministry, only 1.8 per cent of the population has so far been affected by Covid-19 and the remaining 98 per cent of the population still faces the grave risk. There is an agreement among experts that universal vaccination is the only way to deal with the situation. Considering the gross inadequacies of the healthcare infrastructure in the country generally, and particularly in the semi-urban and rural areas, this is most important. In tribal and remote rural areas, such facilities are nearly non-existent.

In the US, which was badly affected by the virus, the massive vaccination drive has led to a significant reduction in the number of hospitalisation cases. The death rate has also come down perceptibly. The same was true for the UK. For India, vaccination of the entire population, or at least 70-80 per cent to ensure herd immunity, is the only answer to the gigantic problem.

Against this background, I am unable to understand why India has been dragging its feet in laying down an unambiguous policy for universal vaccination in a definite time frame by which vaccination of the whole population would be completed, and the stages in which this would be achieved. The policy statement should also transparently bring out how equity will be maintained between urban, semi-urban and rural areas, and different sections of society. The details could be left to the state governments to work out.

The Centre had provided free vaccination to front-line workers, and those above the age of 60. Thereafter, suddenly, it has withdrawn itself and has left it to the states to fend for themselves. The cost of supplying vaccine free must be compared with the price India is paying for huge dislocations due to the pandemic, loss of livelihood for millions of daily wage-earners and migrants, loss of millions of salaried jobs, acute shortages, and so on. Providing vaccination free of cost nationally has to be a political decision and I am unable to understand why PM Modi is dithering. He should immediately announce that the Centre would provide free vaccination to all. Simultaneously, he should make an appeal that those who can afford, should make a voluntary contribution to the designated government bank account, not just for their vaccination, but also as a donation for vaccination of others who cannot afford it. This will get a massive response, as in his appeals to people to voluntarily give up subsidy for LPG gas and railway concessions to senior citizens.

The responsibility of procurement of the required vaccine doses should also be taken over by the Centre. This will include procurement from domestic manufacturers, as also imports from abroad. It makes no sense to ask the states to arrange such supplies. In fact, some municipal corporations are now poised to issue tenders for their requirements. This will be counterproductive. Apart from having to pay a higher price, several advantages of centralised purchases will be lost.

Finally, amid the Covid-19 pandemic, the danger of resurgence of the virus can be avoided only if the whole population is vaccinated. India cannot afford the luxury of leaving the decision of vaccination to individuals, as in Western democracies. It is, therefore, imperative that vaccination is made compulsory for every inhabitant of India. The Centre has powers to issue such orders under the Epidemic Diseases Act. But, if there is any legal impediment, an ordinance could be issued for the purpose.