Rahul’s bid to offer constructive suggestions regarding vaccine distribution, reduction in the age of immunisation, fast-tracking of emergency approval for foreign-produced shots, which were eventually announced by the Modi govt, seems to have enhanced his stature within the Congress parivar. But there is still no clear indication that Rahul would be taking over as the Congress chief in June. 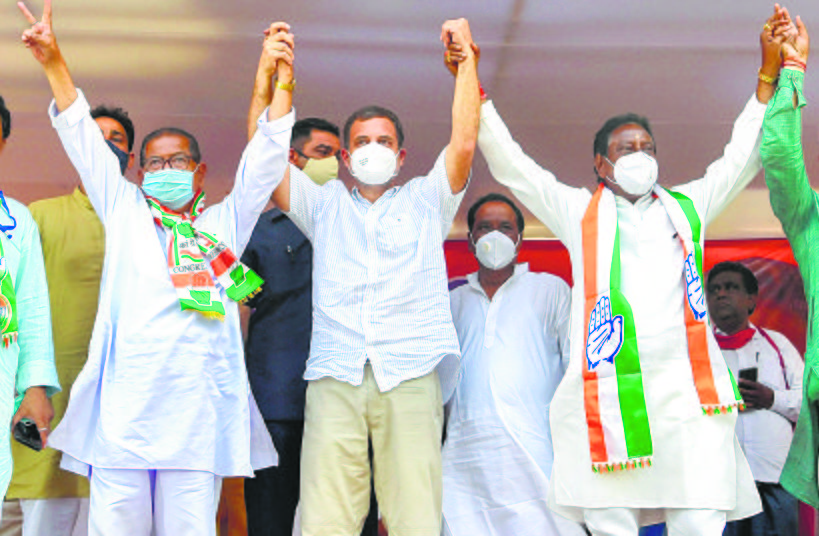 REFRESHING APPROACH: The party has been supportive of Rahul Gandhi’s way of engaging the NDA govt on handling the pandemic, but he remains a reluctant leader. PTI

Just as speculation was rife over a possible split in the grand old party around May 2 when the Assembly results of four states and one UT will be announced, the Congress seems joining ranks at all levels of the party hierarchy and accepting Rahul Gandhi as its leader.

The reliance on Rahul is coming amid a rather grim scenario which has little to do with politics. The enormity of Covid-19 pandemic or its second brutal wave has shaken everyone to the core. The government of the day may not say it officially but the health emergency has put the Indian nation at war. As former Army chief General Ved Prakash Malik said rather dishearteningly in his April 18 tweet, “Our nation is at war. 1,338 Indians died due to the pandemic yesterday (1,182 the day before), more than 2.5 times the total killed in action in Kargil war. Is the nation focused on this war?”

The Narendra Modi government’s inept handling of the Covid-19 crisis, acute shortage of oxygen cylinders, injections and medicines, the mindless focus on electioneering and political rallies have taken the sheen away from the Prime Minister, who for the past seven years had built a formidable reputation as a hands-on man, always confident, in command and leading from the front.

The erosion in Modi’s ability to flawlessly and effortlessly deliver anything and everything has been Rahul’s gain. Suddenly, Rahul’s consistent doomsday prophecies about the possible consequences of the coronavirus crisis, which were earlier dubbed as ‘scaring people’, turned out to be right. Rahul’s cause was greatly helped with the Modi regime facing a public outcry and social media outrage, and took a series of decisions that were suggested by both Rahul and former Prime Minister Dr Manmohan Singh. The CWC that met earlier this week, released a 14-point “chargesheet” accusing Prime Minister Modi of pushing the country towards an unprecedented catastrophe and observed what Rahul had been saying for the past year, “We regret to say the nation is paying a very heavy price for the thoughtlessness and unpreparedness of the NDA government to tackle the gravest disaster that has hit the country and has affected millions of families claiming 1,75,673 lives so far.”

For once, the Congress’ in-house dissidents, known as the Group of 23 or G-23 are in agreement with Rahul that a “constant declaration of victory” by the Modi government led to a grim situation. “The government has taken off all the warning systems and shut them down.”

Rahul’s bid to offer constructive suggestions regarding vaccine distribution, reduction in the age of immunisation, fast-tracking of emergency approval for foreign-produced shots etc. which were evenutally announced by the Modi government, seems to have enhanced the young Gandhi’s stature within the Congress parivar.

However, there is still no clear indication that Rahul would be taking over as the Congress chief in June this year. Last heard, the 87th AICC president between December 2017 to May 2019 appeared a tad reluctant. But in more substantive terms, Congress insiders feel Rahul’s line of thinking and style of functioning is finding far greater acceptance now than before. This factor alone can provide Sonia and Priyanka Gandhi an effective handle to influence Rahul to take over swiftly. The current Covid-19 crisis is such that a possibility of physical, no-holds-barred contest in a party polls are remote.

Congressmen of various hue and shades are beginning to realise that Rahul is every bit an unconventional politician. His economic and political thinking seems deeply influenced by the left-of-centre, causing disquiet within the grand old party. Senior Congress leaders recall Amartya Sen’s interview conducted by Vinod Mehta and Anjali Puri in the Outlook issue of August 2009 where the Nobel laureate had described Rahul as ‘talented’ and as someone deeply concerned about deprivation in India and wanting to make a change. The noted economist had remarked, ‘I know him (Rahul) a certain amount. I once actually spent a day with him when he visited me in Trinity (Cambridge) and I was very impressed with him.’

In the interview, Sen had said that the possibility of Rahul becoming the Prime Minister someday could not be ruled out. Sen said he had told Rahul that there were ways for him to ‘dazzle the world’ with the money he could make. “But he wasn’t in the least interested. I would say, since I have known Manmohan at the same age, that there was a very similar commitment in both of them, in terms of being deeply concerned about deprivation in India and wanting to make a change in that. And to devote one’s lifetime to that.’

Cambridge seems to have influenced Rahul quite a bit. Speaking to the Cambridge campus paper, Varsity, in 2010, Rahul had told Merrow Golden and Ashleigh Lamming, both political science students, that the most important thing he learned at Cambridge was the ‘importance of compromise’. Lamming recalls Rahul as saying that the Cambridge system had helped him learn how to not just ‘argue for his own opinions, but to find a solution that takes all points of view into account’.

The key question in the present context is whether Rahul would implement the ‘importance of compromise’ within the Congress. Will it be the way forward?