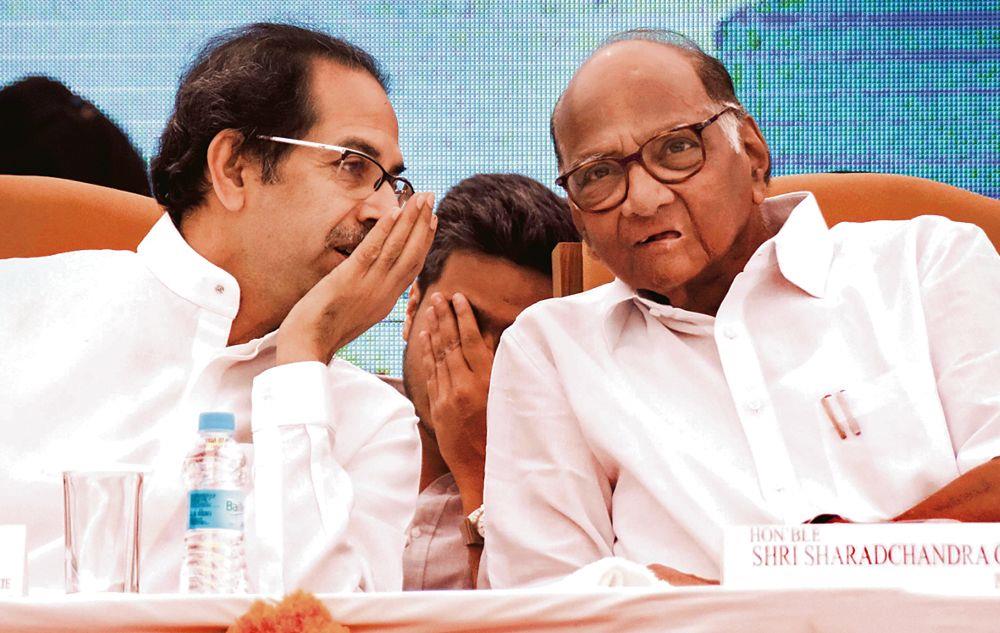 Calling the shots: By countermanding his Home Minister’s and the police chief’s orders, Uddhav (left) has weakened his authority and the office of the Commissioner.

After an acrimonious divorce from its long-time partner, the BJP, the Thackeray-led Shiv Sena jumped into bed with that old warhorse Sharad Pawar’s NCP and Rahul Gandhi’s Congress! It was a hastily arranged marriage with all three parties starting on uneasy notes.

The people of Maharashtra expected Amit Shah to wave his famed magic wand to break up the marriage even before it was consummated, but Sharad Pawar had an equal number of tricks up his sleeve. He was a more experienced hand at this game than Amit Shah. Besides, the coronavirus stepped in to divert attention to something afar from the Machiavellian moves of wily politicians.

But politics has again regained its primary place with an assault on a famed institution of the city of Mumbai — its Police Commissioner. The first incumbent, Sir Frank Souter, occupied the ‘gaddi’ for 24 years. Sir Patrick Kelly, the most celebrated Commissioner of the colonial era, was the chief for eight years. And the only ICS officer to be appointed to the post, SM Edwards, wrote in his memoirs that the job ruined his health so much that he was unable to resume his duties after furlough at his home in the UK. Edwards was the Municipal Commissioner of the city before he was moved to the police.

The job of policing a city that never sleeps is prized by all IPS officers post Independence. Lobbying and manoeuvring, a practice frowned upon in my days, has become so endemic that one grieves for the future of policing in India. When officers sell their souls to the politicians, they also lose the respect of their men by surrendering their authority to their patrons.

Some seek the glamour and the publicity the position offers, others are interested in the pelf. Unscrupulous ones, prone to temptation, can easily become wealthy if they keep their political masters equally in clover. There have been such chiefs before. Most of them have not lasted in the job for too long. But I am delighted to record that most incumbents were not afflicted by this particular one of Dante’s ‘Seven Deadly Sins’.

It is the bounden duty of the politicians to keep such men or women out of contention for this prestigious post. They have a responsibility to ensure that the public who they have sworn to ‘serve’ are not taken for a ride. If a wrong man or woman is chosen because of patronage or ‘cash-for-transfer’, people will be short-changed by officers who put their private interests before all else.

Commissioners appointed by the lobbying route have perforce to repay the favour. Mostly the repayment is effected by acceding to the minister’s ‘requests’ to transfer junior officials to positions where they can make maximum illegal money. This repayment translates into unmitigated corruption, or, even worse, total injustice when you let off lawbreakers or falsely involve innocent persons to please their political masters!

I am not saying that this has happened in the recent imbroglio where the Commissioner’s order transferring 10 Deputy Commissioners of Police (of the rank of SP) was countermanded by the Chief Minister. Unfortunately, the cancellation of the Commissioner’s transfer order was publicly announced, obviously to show that Uddhav Thackeray and the Shiv Sena are in charge. Actually, the police chief did not have to consult anyone according to rules. As Police Commissioner from 1982 to 1985, I did not have to take permission of the Home Minister to transfer Deputy Commissioners and those junior to them. But the Chief Minister appears to have taken umbrage that the Police Commissioner did not even inform him before ordering the shifts!

The Home Ministry was allotted to the NCP in the division of portfolios when the coalition government was sworn in six months ago. The present Commissioner is known to have spent two hours with Sharad Pawar at his residence before his appointment was announced. The appointment would necessarily have been approved by Uddhav Thackeray. Yet, the CM expected to be kept in the loop when the transfers of the DCPs were ordered. All political parties want to influence the police. If the power of superintendence is with them, they misuse it.

Finally, Sharad Pawar was compelled to meet Uddhav at the latter’s home, apologise for excluding him from the loop and place the Home Minister before the CM to promise to consult him before approving transfers. By countermanding his Home Minister’s and the police chief’s orders, Uddhav has weakened his authority and the institution of the Commissioner.

New conventions are being added to make the supremacy of the politicians over the police watertight, but this results in the force being run by the politicians instead of professionals. I agree the IPS as a body was mainly responsible for allowing unalloyed ambition to run riot over people’s interests. It has resulted in the slow death of an institution that was respected by the public and has punctured the morale of the police force.