The appearance of the articles suggests that instances of indiscipline involving younger personnel have occurred in the PLA which, in turn, have raised concerns about the political reliability and loyalty of the younger personnel. Xi Jinping is adamant that the PLA remains under the CCP. The articles probably herald the start of a new campaign in the PLA, emphasising political reliability. 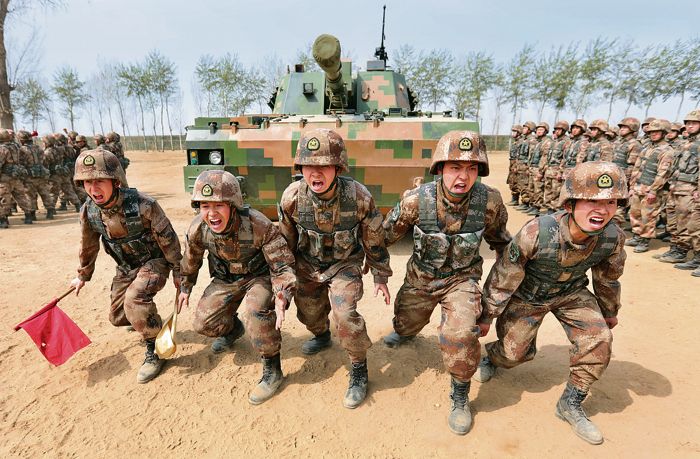 With anti-China sentiment rising globally and US President Joe Biden making efforts to form a broad coalition to contain China’s rise, anxiety in the leadership echelons of the Chinese Communist Party (CCP) has heightened over the possibility of a ‘colour revolution’. This anxiety has spread to the CCP’s sword arm, the People’s Liberation Army (PLA).

While an article in the People’s Liberation Army Daily on May 5, 2020, had pointed to such concerns in military circles, at least two recent articles underscore that these worries have resurfaced, and more strongly. Last year’s PLA Daily article had alluded to major powers utilising the difficult post-Covid global economic situation for gaining overall strategic advantage. It had cautioned they could use the economic crisis to cause a recession in China and provoke social unrest. Advocating that financial and military preparedness would have to be commensurate, it warned that an economic crisis could, in turn, cause a political crisis.

Amid a series of warnings to citizens by China’s Ministry of State Security (MoSS) since April this year to be vigilant against attempts by the US and the West to instigate a ‘colour revolution’ in China, similar anxieties in the PLA have recently become transparent. Two articles by PLA officers this May reflect these anxieties.

Their article disclosed that serious concerns exist about the PLA rank and file adhering to the policy of the party’s absolute leadership over the army.

Asserting that “the party’s absolute leadership over the army is the fundamental principle of our party’s army building and ruling the army”, they said this principle is facing new challenges today. They enumerated the reasons as: the pace of military modernisation and rejuvenating the army; new methods of building the army at the grassroots level; the “profound new changes” in mission requirements, including the composition of officers and soldiers and troop organisation; and the external social environment.

They said these obstruct efforts to ensure that the grassroots level accepts “the party’s absolute leadership over the army”.

The article insisted that unless “the party’s absolute leadership of the army is accepted down the line to the grassroots level”, the majority of officers and soldiers will face severe tests in their missions in complex struggles.

Additionally, it regretted that “officers and soldiers of the new era generally lack the training in the severe and complex environment and the baptism of blood and fire on the battlefield.”

The article emphasised that if the grassroots level of the army is not strong politically and “lack understanding and mastery of the party’s absolute leadership over the military”, they would be more susceptible to “the extremely deceptive political propaganda of the hostile forces.”

Keeping in mind that college and high school graduates today constitute the largest single source of recruits and their thinking could well have been influenced by “liberal” teachers and professors, the article emphasised the importance of clearing out “the fog of thought”.

It recalled Chinese President Xi Jinping’s warning that “some Western countries are stepping up to instigate ‘colour revolutions’ in our country, stepping up the implementation of online ‘Cultural Cold War’ and ‘political genetic modification’ projects in an attempt to root out our military officers and soldiers and pull the military out of the party banner.”

Xi Jinping asserted that “The challenges we face in the field of ideology and political security are very serious” and it is imperative “to first strengthen positive publicity and guidance of public opinion... Consolidate and strengthen the mainstream ideological and public opinion... and guide officers and soldiers to grasp correct standpoints and viewpoints.”

He called for self-confidence in the present system while comparing China and foreign countries. The article reiterated Xi Jinping’s caution that “The so-called process of ‘democratisation’ in the West has brought about long-term turmoil and war” and “the most fundamental thing is to always uphold the party’s absolute leadership over the army.”

Acknowledging the importance of the Internet for the young officers and soldiers, described as of the “media generation”, the article underscored the importance of countering online propaganda. It recalled Xi Jinping’s instruction that the new situation “urgently requires us to change our minds, carry out online struggles like a war, and continuously strengthen the ability of officers and soldiers to resist the erosion of social corruption and the infiltration and destruction of hostile forces”.

Expressing doubts about the political reliability of the younger PLA officers and soldiers, the article’s authors recommended enhanced emphasis on “educating” the personnel.

The sentiments were indirectly echoed the same week in a Liberation Army Daily article whose author was identified only as a member of PLA Unit 31006. He asserted that “Party members must enhance their sense of honour” and bolster the “sense of pride as a member of the party organisation.” The unnamed author spoke of the inspiration gained from “the firm belief of the revolutionary ancestors” and urged the soldiers to emulate “their infinite loyalty to the party” and the manner they cherished “the honourable title of” communist"!

The appearance of these articles suggests that instances of indiscipline involving younger personnel have occurred in the PLA which, in turn, have raised concerns about the political reliability and loyalty of the younger personnel. Xi Jinping is personally adamant that the PLA remains under the CCP. The articles probably herald the start of a new campaign in the PLA, emphasising political reliability.