Sri Lanka out of the shadows

India must do its earnest bit to mitigate trust deficit 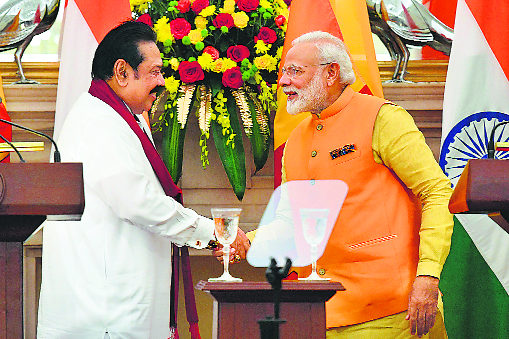 The recent state visit by Sri Lankan PM Mahinda Rajapaksa presents a fantastic panorama of how, like in music, consonance and dissonance can be introduced into international diplomacy to form a structural dichotomy in which they define each other by mutual exclusion.

The foreign dignitary whom Rajapaksa last received in Colombo before embarking on the visit, his first to India in this second coming as Sri Lanka’s uncrowned monarch, was Pakistan’s chief of the air staff Air Chief Marshal Mujahid Anwar Khan. Only 10 days prior to that, Rajapaksa had received another Pakistani dignitary — chief of the naval staff Admiral Zafar Mahmood Abbasi. In the symphonic blending, this might appear a jarring note. But it served a purpose.

Abbasi’s itinerary had included a visit to the eastern naval area as well as the naval dockyard at Trincomalee, Sri Lanka’s largest naval base, where he was given ‘briefings on various aspects of operational activities’. Rajapaksa discussed with the Pakistani military chiefs ‘matters related to regional security & stability and mutual interest… (and) highly appreciated the role and contributions of Pakistan in spearheading various initiatives for maintaining peace and stability in the region’. He underscored the ‘need of learning from each other’s experience’ and acknowledged Pakistan’s ‘unwavering support to Sri Lanka in any hour of need’.

Colombo is a sophisticated practitioner of diplomacy, and the central message here was that it will not be intimidated by the Big Brother in its pursuit of a robustly independent foreign policy. Rajapaksa conveyed this tough message in the friendliest possible manner while in India. He showered praise on India, and was eager for cooperation but it must be based on equality, mutual respect and mutual benefit and anchored on the principle of non-interference in each other’s internal affairs.

Rajapaksa was categorical that India’s move to nullify Article 370 and ‘integrate’ J&K was the country’s internal affair. In his words, ‘Whatever the view of any country, we will not get involved in the internal matters of India. But remember this: I always say India is a relation. Others are friends.’ Again, the CAA too is an ‘internal’ matter for India. Among friendly countries, probably no statesman has been so forthright?

However, India failed to reciprocate and instead chose to be intrusive on the Sri Lankan Tamil problem, which is as ancient as Kashmir issue. PM Modi exhorted that Colombo ought to meet the ‘expectations of the Tamil people for equality, justice, peace, and respect’. He added, ‘It will be necessary to carry forward the process of reconciliation with the implementation of the Thirteenth Amendment to the Constitution of Sri Lanka’. It is yet another matter that Delhi dispensed with the special status for J&K while advising Colombo that it should create provincial councils and devolve the powers of land, the police, financial powers etc., to Tamil provinces. Unsurprisingly, Rajapaksa point-blank ruled out any solution to the Tamil problem that ‘the majority community in Sri Lanka will not accept’.

Emulating Washington, Delhi also spotted Sri Lanka as the template of Indo-Pacific strategy (codename for containment of China). Again, Rajapaksa dispatched the ball back to the Indian court: ‘Sri Lanka has received a lot of benefits from being part of China’s Belt and Road Initiative… China helped us for the sake of development, that is all. Our war had shattered our country, we needed help to develop; they were ready, so why not?’

Sri Lanka doesn’t want to get entangled in geopolitical shenanigans and lose its way. Rajapaksa sequesters Sri Lanka’s friendly relations with Pakistan and China in deference to India’s security interests, but will exercise the sovereign right to pursue vital national interest. There is a trust deficit. And it appears to be the legacy of the short-sighted 2015 regime change project, where India collaborated with the US and the UK to replace Rajapaksa for his perceived ‘pro-China’ policies.

With biting sarcasm, Rajapaksa remarked: ‘India has never interfered. In fact, even India has made similar statements, that you will always protect us. And I am absolutely sure you will… no one has yet tried to interfere in our matters… other than during the last elections. Then, all the countries got involved in [the 2015 elections]. But now, we would like to have good relations and work with all the countries.’

Delhi should not complicate the above matrix with a perception that it is the recruiting agent for US-led Indo-Pacific strategy. Sri Lanka has strong supporters internationally in Russia and China, which neutralises US bullying. It enjoys excellent networking with SAARC countries surrounding India. Its wariness of BIMSTEC being a Trojan horse of Indo-Pacific is understandable.

Diplomatic pirouettes over Indo-Pacific should not mar relations with Sri Lanka. What India should do in the near term to mitigate trust deficit are three things. One, India should respond to Rajapaksa’s request to extend a three-year moratorium on debt repayments. This is not only timely help but a political gesture to Rajapaksa’s leadership. Two, the invitation to the housing project, which carries Rajapaksa’s imprimatur, must be earnestly pursued. It can create goodwill in the Sinhala heartland. Three, an early visit by PM Modi will help maintain the tempo of high-level exchanges with the strong leadership that has emerged in Colombo, which harks back to the JR Jayewardene era in the seventies in Sri Lanka’s a priori political history.