Sri Lankan crisis has implications for India : The Tribune India

The rapid decline of the Sri Lankan economy has to be viewed in the context of the fact that till recently per capita income there was far higher than in India. An economy that seemed to be doing well suddenly nose-dived to a situation where even the basic goods were unavailable to the people. The pandemic plunged five lakh people below poverty line, according to World Bank estimates. Subsequent policies only worsened the situation. 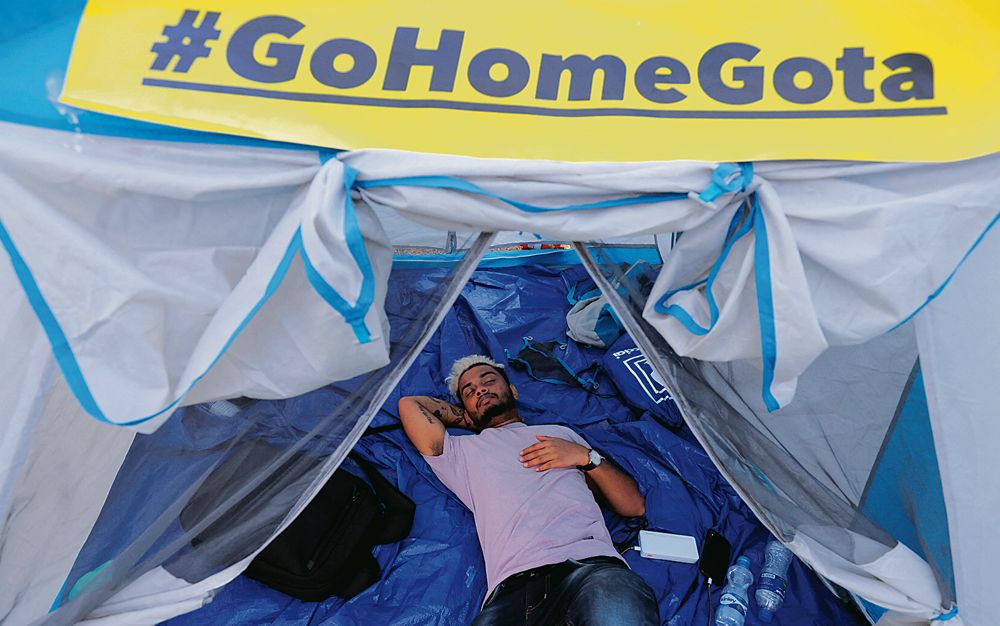 Volatile situation: The economic crisis in Sri Lanka has led to political turmoil with demands being raised for the ouster of its top political leaders. Reuters

India’s neighbourhood is in the throes of economic crises. On the western border, Pakistan is facing political upheaval, while the economic scenario is also worsening with high inflation, currency devaluation and huge external debt. In the south, the island nation of Sri Lanka has an economic emergency that has spiralled into a political crisis with mass demonstrations calling for overhaul of the present government led by President Gotabaya Rajapaksa. India must do its utmost to help Sri Lanka, where the public is suffering owing to the combined effects of the pandemic and a series of misguided policy initiatives.

The southern neighbour’s woes began in 2019 when a series of terrorist attacks on Easter Sunday brought tourism inflow to a sudden halt. Hospitality is a major revenue earner for the country and this sector was badly hit. But there was hope of the tide turning in 2020. That was not to be as the pandemic brought a freeze in world travel for many months.

To compound the situation, the Rajapaksa government went ahead with a series of deep tax cuts. These led to severe revenue shortfalls over the past two years with foreign debt also rising rapidly. From 42 per cent of GDP, it shot up to 119 per cent of GDP in 2021. Foreign exchange reserves fell to 2.3 billion dollars and there are now doubts over meeting the impending debt repayment schedule for the year.

The next policy initiative to backfire was the imposition of a ban on chemical fertilisers, pesticides and weedicides in mid-2021. The aim was to become the first country to rely only on organic farming. The net result was a sharp fall in the output of a staple food item, rice, as well as the country’s major cash crop, tea. The country had to import rice to meet the domestic demand though in the past it had been self-sufficient in this grain. Tea exports also fell drastically.

The rapid decline of the Sri Lankan economy has to be viewed in the context of the fact that till recently, per capita income there was far higher than in India. It was 12,870 dollars in terms of purchasing power parity (PPP) as compared to 6,390 PPP dollars in this country. Thus an economy that seemed to be doing better than its big northern neighbour, suddenly nose-dived to a situation where basic goods were unavailable to the people. The pandemic alone had plunged five lakh people below the poverty line, according to World Bank estimates. The subsequent misguided policies worsened the situation.

Fuel and electricity shortages have been mounting while inflation has crossed 17 per cent leading to exorbitant prices of essential commodities. Medical supplies are scarce forcing hospitals to suspend operations while even examinations have been held up due to lack of paper.

India’s immediate response was to provide a one billion dollar line of credit to the beleaguered economy, with another 500 million dollars provided earlier for fuel purchases. It has also sent shipments of badly needed diesel and rice. China has not been left behind and tried to step in to ensure that its sphere of influence over Sri Lanka which had been rising in recent years, is not diminished. But the ramifications for this country in case Sri Lanka’s political and economic situation continues to deteriorate will be much more than for other more distant regions. It is thus imperative that India continues to provide as much assistance as possible to alleviate the sufferings of the general public.

These repercussions could include an influx of refugees which till now has been only a trickle. But in case the situation worsens, there is every possibility that this could turn into a flood that may be difficult to manage. Second, India’s own exports could be affected as Colombo ports serve as a trans-shipment hub for about 60 per cent of its global trade. Freight costs will go up if there are delays at the port. There is also considerable bilateral trade amounting to nearly five billion dollars, while Indian industry has made wide ranging investments in that country which could be affected by the unrest.

On the plus side, the embattled government has finally decided to seek help from the International Monetary Fund. The new Finance Minister Ali Sabry is slated to have a meeting with the Fund next week to chalk out modalities for the loan package as well as the stringent conditionalities that are bound to go along with the assistance. The fact is, there is no option but to carry out serious economic and financial reforms to bring the economy on track even if not insisted upon by the Fund.

The economic crisis, however, has engendered a political emergency as well. It looks as if the Rajpaksa family which had been ruling the country over the last 17 years may finally have to go. Though President Gotabaya Rajapaksa is trying hard to avert such a scenario, the public have been calling for his resignation in the demonstrations. The government has already become a minority one with over 40 ruling party MPs having deserted the ship. But the public and opposition parties are not likely to be satisfied with just the resignation of the President and handing over charge to the Prime Minister, his brother Mahinda Rajapaksa. It looks likely that there may be a complete change in the system of governance. This could be by creating a national government though discussions are still on over these issues.

At this stage, India needs to play the role of big brother by providing financial and material support even though the country had seen increasing influence of China in recent years. In fact, some observers have blamed investments in unproductive infrastructure projects of China for Sri Lanka’s growing debt burden. Right now, however, it is time for India to put the past aside and focus on providing succour to the general public there who are in dire straits due to the unprecedented economic collapse.