It is clear that Pak-Turkey relations have been taken to the next level under the leadership of Erdogan and Imran Khan. For Turkey, taking potshots at India is well worth Pakistan’s support for the ambitions of Erdogan to emerge as the leader of the Ummah, replacing Saudi Arabia. Getting nuclear technology from Pakistan would be the icing on the cake. But with Imran on a shaky domestic wicket, it remains to be seen if Pakistan can stay this dangerous course. 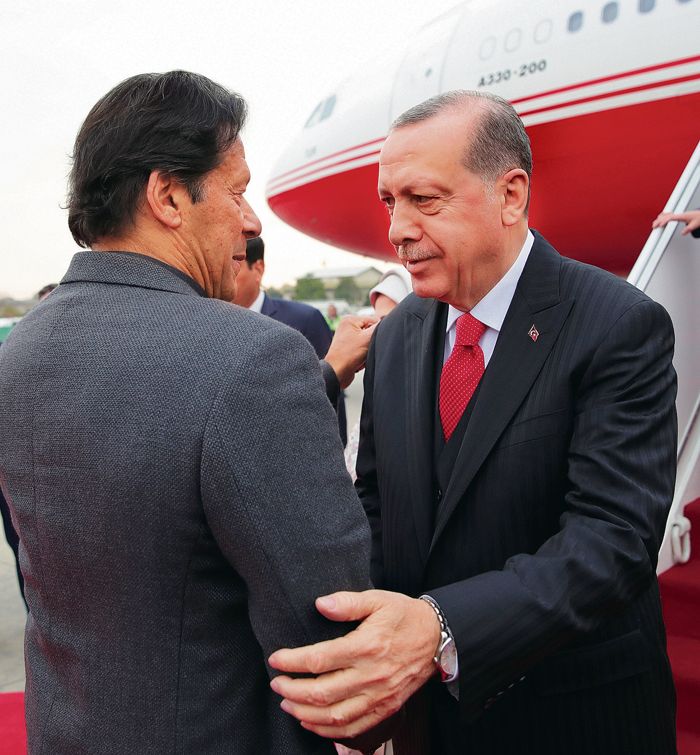 Changing equations: Pakistan has moved away from the Arab world, miffed at the attitude of Saudi Arabia and UAE towards the Kashmir issue. AP/PTI

The growing bilateral relations between Pakistan and Turkey are fairly well documented. These include an increasing frequency of high-level visits, military exchanges and exercises, purchase of defence equipment, political support for each other’s disputes with neighbouring countries and so on. While the uptick in relations dates from at least the time of Pervez Musharraf, under Imran Khan, the relationship seems to have been taken to a new level.

For several decades, during bilateral visits and talks, both India and Turkey had agreed that Kashmir was a bilateral issue to be resolved through the Simla Agreement. Lately, however, Recep Tayyip Erdogan has started talking about UN resolutions as also raising the Kashmir issue at the UN General Assembly. For example, in his address to the 74th session of the UNGA in September 2019, Erdogan, apart from talking about UN resolutions, mischievously called Kashmir a neighbour of India. On a visit to Pakistan in February 2020, Erdogan said that the Kashmir issue was as important to Turkey as it was to Pakistan. Recalling the events of the Turkish War of Independence, Erdogan said, “And now, we feel the same about Kashmir today. It was Çanakkale yesterday and Kashmir today; there is no difference between the two.”

Apart from Turkey’s support for Pakistan’s position on Kashmir at almost every international fora, two recent reports point to a more ominous dimension of this relationship.

The first report is from the Mediterranean-Asian Investigative Journalists titled ‘Turkey-Pakistan: Secret Army of Mercenary Journalists’ that details how Pakistan and Turkey are creating a joint propaganda team. The key driver of this effort is Erdogan’s ambitions to claim the leadership of the Muslim world and the realisation of the grand Ottoman dream. For this, he needs to be projected globally as the champion of the Ummah.

For its part, Pakistan has moved away from the Arab world, miffed at the lukewarm attitude of Saudi Arabia and the UAE towards the Kashmir issue. On the rebound, it has found favour with Turkey that, as a quid pro quo for Pakistan’s support in the propaganda effort, is willing to join Pakistan’s tirade against India and especially Kashmir.

According to the report, Turkish intelligence agency MIT was working with the ISI and the ISPR to build up a propaganda network centred on the TRT World and Anadolu Agency. These two Turkish media outlets have been hiring several Pakistani and Indian Kashmiri journalists, some of who would be permitted to settle in Turkey. As part of this effort, on March 14, 2019, Anadolu Agency opened its bureau in Pakistan for coordinating the movement of media professionals between both the countries and generating suitable content.

An analysis of the content generated shows that TRT World published more than 30 negative stories when India abrogated Articles 370 and 35A related to Jammu and Kashmir. The give-away was when Pakistan’s Foreign Ministry recommended 14 of them.

Additionally, in September 2019, Turkey, Pakistan, and Malaysia declared their intention to set up a new TV channel under the leadership of Turkey. The report quoted a source working in the Turkish Foreign Ministry confessing that the plan of creating a new media house by Turkey-Pakistan-Malaysia for tackling ‘Islamophobia’ was actually a propaganda plan to advance the ambitions of Erdogan to edge out Saudi Arabia as the leader of the Islamic world. Quite likely, recruitment of Malaysian journalists would soon begin as soon as the Covid-19 restrictions are lifted.

The second report from MEMRI in January 2021 raises concerns that the Turkey-Pakistan partnership could escalate into the nuclear realm with Turkey seeking nuclear weapons technology from Pakistan. Turkey currently has two nuclear reactors-Tr-1 and Tr-2-run by the Turkish Atomic Energy Authority. According to a transcript published by MEMRI TV, Erdogan, in 2019, expressed Turkey’s intention to acquire nuclear weapons, stating: “Some countries have missiles with nuclear warheads, and not just one or two. I, however, am not supposed to have missiles with nuclear warheads. I do not accept this.”

Much like Pakistan, Erdogan has zeroed in on nuclear weapons to enable the rise of Turkey and the revival of the Ottoman Caliphate. The only Islamic country that could provide Turkey with nuclear technology is Pakistan that has an established track record of nuclear smuggling and proliferation.

Three other elements of the relationship are important. First, the Turkish supply of drones to Azerbaijan was an important factor in its recent war with Armenia. Pakistan is buying drones from Turkey that could be deployed on the border with India. Second, Pakistan and Turkey are considering providing dual nationality to the citizens of the two countries. Third, in its bid to cosy up to Turkey, Pakistan blatantly violated the UN rules when it illegally passed confidential information to Turkey about Turks who had sought refugee status with the UNHCR in Islamabad. The UNHCR office in Islamabad passed the confidential information to the Pakistani government, which in turn handed the list over to the Turkish embassy.

It is clear that Pak-Turkey relations have been taken to the next level under the leadership of Erdogan and Imran Khan. For Turkey, taking potshots at India is well worth Pakistan’s support for the ambitions of Erdogan to emerge as the leader of the Ummah, replacing Saudi Arabia. Getting nuclear technology from Pakistan would be the icing on the cake. It, however, remains to be seen if an impoverished Pakistan and Imran Khan on a shaky domestic wicket will have the heft to stay this dangerous course.