While public protests seem to have progressively increased in scale and intensity, the government’s response has been predictable — ranging from reluctant accommodation of some to largely ignoring others or brutally suppressing a few with the help of heavy-handed crackdowns. 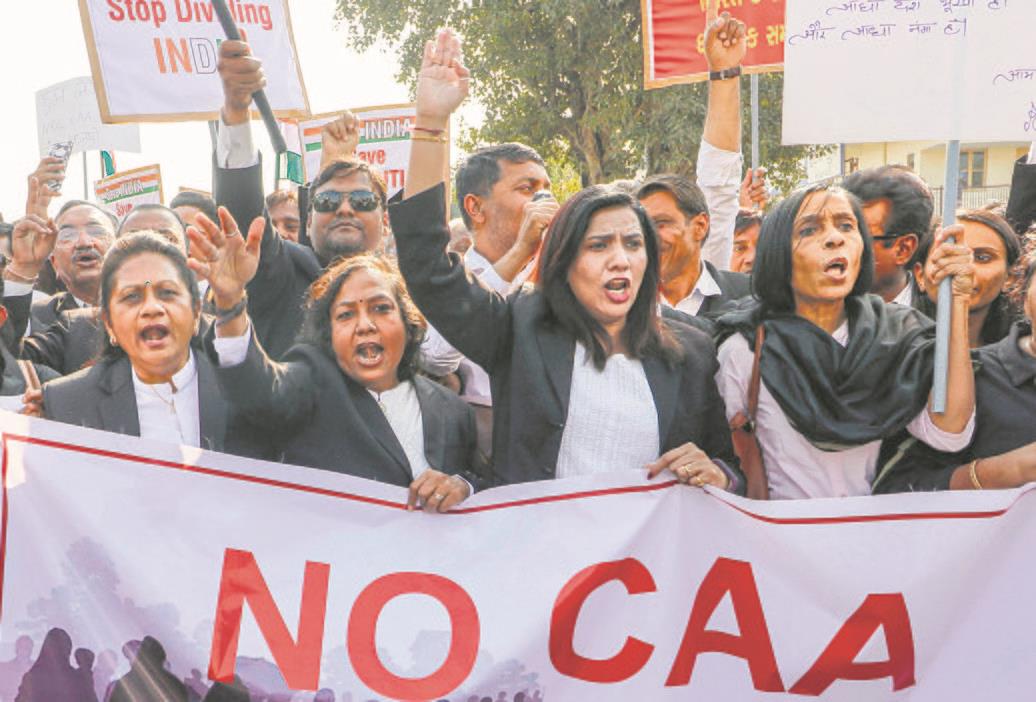 DRIVING A WEDGE: The anti-CAA protests were curtailed through ‘divide and rule’ tactics. PTI

THE past few years have witnessed unprecedented opposition on the streets from students, farmers, workers, women, Dalits and Muslims. Farmers’ protests against amendments to the Land Acquisition Act (2014); student protests against unrelenting interference in universities (2016); protests against mob lynching of Muslims (2015) and against the dilution of SC/ST Act (2017); the countrywide protests against the Citizenship Amendment Act (CAA) in 2019-20; and the ongoing farmers’protests against the three agriculture Acts — all of these provoked by controversial policies have generated mass demonstrations and unrest.

While public protests seem to have progressively increased in scale and intensity, the government’s response has been predictable — ranging from reluctant accommodation of some to largely ignoring others or brutally suppressing a few with the help of heavy-handed crackdowns to branding opponents as anti-nationals. The month-long farmers’ protest is the biggest so far and poses the most serious challenge to the government’s economic agenda. But these too have drawn a predictable response from the Bharatiya Janata Party (BJP) leaders and its spokesmen in the media and from its troll armies. However, neutralising these protests through the usual tactics of divide and rule hasn’t worked, unlike the anti-CAA protests, which were brutally curtailed through such tactics.

The massive mobilisation of farmers rocking Delhi is different from most other protests in recent decades. While the most visible face of the protests are Sikh farmers from Punjab, they have been joined by farmers’ unions and trade unions from various states. It is clearly not an identity or regional protest; it is a protest about farmers and their concerns expressed through their singular demand to repeal the three controversial farm laws.

Farmers from India’s granary are indubitably unhappy with these laws passed hastily in the middle of the pandemic without proper consultation. Pleas for consultation were brushed aside before the ordinances were converted into laws by short-circuiting established processes and voting procedures. Above all, these laws weren’t discussed or debated in any meaningful and sustained way with the groups who stand to be affected by them. This undemocratic approach has precipitated the present crisis compounded by the manifest intent to make far-reaching changes in Indian agriculture by removing the State from the equation and encourage corporatisation which many farmers fear will ultimately drive down crop prices, devastating their livelihoods.

Even though the two protests are dissimilar, commentators have drawn comparisons between the farmers’ protests and the Anna Hazare movement which contributed to the collapse of the United Progressive Alliance (UPA). The Anna movement was dominated by the urban middle class and promoted by the media while the farmers’ protests which cut across caste, class, and religious identities is not backed by the mainstream media. The Anna movement was much smaller in scale. Yet, it had a major impact on the political fortunes of the UPA government and in shifting the political discourse to the Right.

The Anna movement had apparently positioned itself in the non-political space, denying its platform to any politician. But it’s evident that it had the backing of the Rashtriya Swayamsevak Sangh (RSS) and its affiliates and sympathisers. The movement helmed by India Against Corruption (IAC) was propped up by the RSS-BJP to finish UPA-2. They succeeded despite Manmohan Singh conceding to all of Hazare’s demands — Joint Drafting Committee (JDC); holding a special Parliament session; and passing the Lokpal Bill. The JDC comprising Hazare’s nominees and ministers for drafting the Bill was termed by the UPA government as an ‘extra layer of consultation’ and a ‘new experience’, thus according unelected activists the same legitimacy as elected representatives. Additionally, the UPA government sent its emissaries to the Ramlila Maidan for mediation with Team Anna and senior ministers, including Pranab Mukherjee, went to the Delhi airport to meet Ramdev in a bid to persuade him to call off his impending fast.

The salient difference between the response of the two governments relates to their fundamentally different approach to dissent and protests. The space for dissent is much narrower under the present dispensation. Thus, the BJP has tried to weaken and defame the agitation by labelling it as anti-national, Khalistani or ultra-Left and blamed political opponents, namely Congress and Left leaders, for their bid to ‘mislead’ farmers. This government is generally not inclined to concede political space and will not allow its opponents to gain an upper hand. Whereas there was no attempt by the previous government to institutionally subvert the Anna movement, in fact, the latter faced no obstacles in bringing the corruption issue to the political centre stage which crystallised public opinion against the UPA and ultimately hastened its downfall. The BJP is also not bothered as it believes alienating farmers is unlikely to dent its winning spree in elections.

However, because people in large numbers support the position taken by the farmers, the centrality of agriculture to the Indian economy, not to speak of the huge numbers involved in agriculture, the farmers have managed to compel the government to hold talks with them. A ministerial panel has held negotiations with the farm leaders, whereas nothing of the sort happened during the anti-CAA protests which suited the BJP politically in polarising and consolidating its Hindu vote bank. But even while engaging with farmers, the government has insisted that it will talk to them mainly to remove their ‘misconceptions’ about farm laws, and not to repeal them. The farm unions, on the other hand, are unwilling to settle for anything less than complete repeal. This is a gridlock the government had not bargained for when rushing through the farm laws.

The downside of an insensitive and unyielding government which functions through fist and force is obvious. That the BJP’s moves so far have failed is also evident. That’s why it will not emerge unscathed from this crisis even as people who are struggling will gain strength from the resilience of this historic protest. The sizeable pushback from farmers and other groups over the past few years shows that ‘charismatic’ leadership and a ‘strong’ government are not enough to secure consent, leave alone support. The refusal of farmers to budge in the face of structural, physical and symbolic violence from various quarters indicates the limits of ‘majority rule’ and ‘dominance without hegemony’.