Public opinion polls after the ceasefire on May 22 had indicated severe disapproval over Netanyahu’s hard-line tactics during the 11-day Hamas conflict which resulted in hundreds of Palestinian civilian deaths, including children. The media quoted Israelis as saying that such an uncompromising strategy had not benefited their country with long-term peace. They were also annoyed with Netanyahu’s incompetent handling of the Covid pandemic. 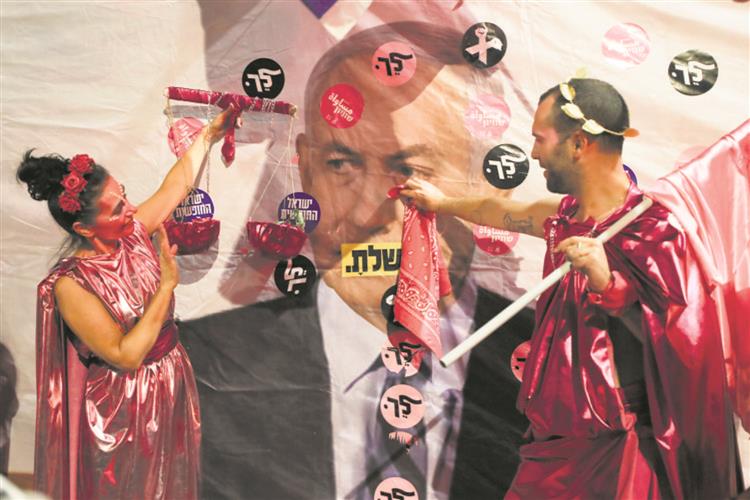 Losing sheen: Netanyahu’s penchant for raking up emotive issues as well as corruption charges against him dimmed his popularity. Reuters

The public mood in Israel at the ouster of Prime Minister Benjamin Netanyahu, who was in power since 2009, was evident by rival rallies in the ‘Liberal’ Tel Aviv and in the ‘Orthodox’ Jerusalem on the night of June 13. Thousands of Israelis spontaneously swarmed to the Rabin and Dizengoff squares in Tel Aviv, chanting “Bibi go home”, dancing, singing, spraying foam-confetti and leaping into the fountain pools for a “celebratory splash”. A lady wearing the Indian bindi was prominently seen accusing Bibi of dictatorship in the guise of democracy.

In contrast, only subdued demonstrations were held in Jerusalem by the orthodox Jews supporting Netanyahu outside his official residence and at the Western Wall on 13th. However, on June 15, Netanyahu supporters came in greater strength to organise a provocative flag-waving demonstration resembling the violent pro-Trump Capitol Hill march on January 6, 2021. They walked from Damascus Gate, the main entry to the Muslim Quarter of Jerusalem’s Old City, chanting “this is our home” and “Jerusalem is ours”. A vigilant police prevented clashes with the Palestinians.

Public opinion polls after the ceasefire on May 22 had indicated severe disapproval over Netanyahu’s hard-line tactics during the 11-day Hamas conflict which had resulted in hundreds of Palestinian civilian deaths, including children. The media had quoted Israelis as saying that such an uncompromising strategy had not benefited their country with long-term peace or making their lives easier. They were also annoyed with Netanyahu’s incompetent handling of the Covid pandemic.

It was this feeling which had swung the public opinion in favour of Yesh Atid party leader Yair Lapid as their preferred prime minister in place of Netanyahu who was hanging on to that chair since 2019 without clear Knesset (parliamentary) majority by playing with coalitions, while retaining absolute personal power.

Netanyahu’s tactics, with the help of US President Donald Trump, by flagging emotive issues like the Jewish sanctity of the Temple Mount for political reasons had only increased daily tensions for an average Israeli citizen as this policy was unable to control either Hamas or the militant PLO Palestinians. The Times of Israel said on May 23 that this had also generated a feeling, even among his erstwhile coalition partners like Naftali Bennett of Yamina party, that Netanyahu’s “prioritising of personal and political considerations over the country’s well-being” was unacceptable. This was a hint that he was clinging on to power to stave off his four corruption trials.

A few hours before the parliamentary vote which rejected him, Netanyahu had pushed his anti-US rhetoric high at the Knesset by sharply criticising the Biden administration for its “soft line on Iran” which would endanger Israel’s security. He compared Biden’s Iran policy to the American refusal in 1944 to bomb Auschwitz concentration camp. He said that he had rejected Biden’s proposal to reopen the US consulate in Jerusalem to handle relationship with Palestinians which was closed by President Trump.

He added that he had rejected Biden’s proposal to freeze Israeli constructions on Palestinian lands. He ridiculed Naftali Bennett, who if elected, “would be too weak to stand up to Washington”. American political website Axios quoted an unnamed senior Israeli diplomat: “He decided to damage the US-Israel relationship for his own personal interests and is trying to leave scorched earth for the incoming government.”

The person who originally used the Temple Mount issue for prime ministerial ambitions was Ariel Sharon. There was a lull in violence from 1998 when Israeli Prime Minister Ehud Barak of the Labour Party was talking with PLO Chief Yasser Arafat on US President Bill Clinton’s initiative, culminating in the July11-25, 2000 Camp David Summit. Although there was no final agreement, this period from 1998 till November 2000 had seen remarkable peace.

However, Likud leader Ariel Sharon’s aggressive “Temple Mount March” on September 28, 2000 had inflamed Palestinian feelings. Accompanied by 1,000 police officers, Sharon declared that the Temple Mount would be perpetually under Israeli control. That certainly won him the Prime Ministership in March 2001 elections, but resulted in perpetual Palestinian suspicion over Jewish intentions on al-Aqsa mosque. It also led to the 2001 Second (al-Aqsa) Intifada. Netanyahu has continued the same strategy.

Away from all the tumult relating to the government formation, the Israeli media focused on the person who had symbolised the defeat of Netanyahu’s “National Security Government” strategy. That was on June 10, when Gilad Schalit, a 35-year-old ex-soldier celebrated his pre-wedding ‘mehendi ceremony’ with his fiancée Nitzan Shabbat which they call ‘henna ceremony’. It is not known whether the Israeli media indirectly wanted to highlight the common bond in Abrahamic religions as the “henna ceremony” is common among “Sephardi Jews” as well as with Arab Muslims and Iranian Shias.

Gilad Schalit was captured by Hamas on June 25, 2006. The fabled Israeli security services could not locate him in the small enclave of Gaza for over five years. That forced Netanyahu to agree to a humiliating exchange of 1,027 Palestinian prisoners in Israeli jails for Hamas to release Schalit on October 18, 2011. Criticism from others, including former Prime Minister Ehud Olmert, that they would never have released the killers had continued to haunt Netanyahu.

Speaking at the Knesset, the new Prime Minister Naftali Bennett praised Netanyahu’s contribution as PM, ignoring his taunts earlier on his inexperience. He also promised to open “a new page” in his government’s relations with the Arab citizens and solve their housing problems. Yet, he warned against violence and ceasefire violations which he implemented on June 16 by ordering air strikes on Hamas for sending incendiary balloons to Israel.

Whether the fragile Bennett-Lapid coalition survives or not, what is very refreshing is Bennett’s interview to The Times of Israel on February 24, vowing “to eschew Netanyahu’s politics of domestic hatred and division”. He said: “What Bibi did for ages… the dog whistle against this group or that group, I don’t go there. I’m more right-wing than Bibi, but I don’t use hate or polarisation as a tool to promote myself politically.” That is a good lesson for all, including India.