Tackle Maoists with a top-down approach

One way out is to get the Army to depute senior officers (from colonels to generals) with experience in counter-insurgency operations to command the CRPF paramilitary men under the Home Ministry. If the Army can provide officers for the NSG and Establishment 22, which are under the Home Ministry or the PMO, then why not for anti-Maoist operations? 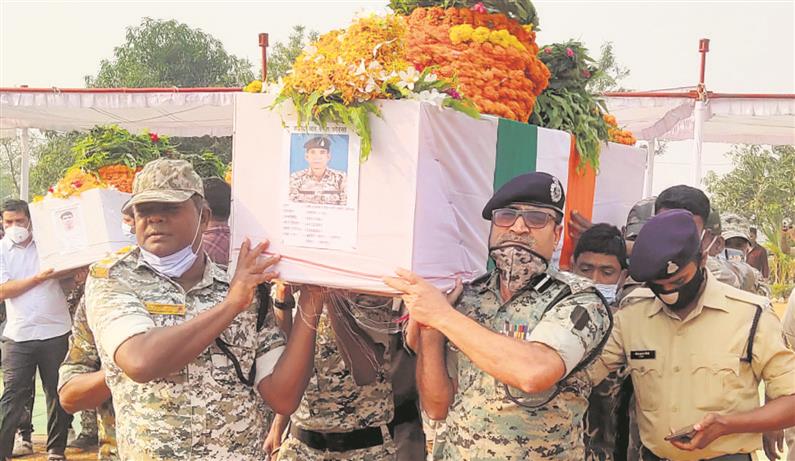 SIMILAR PATTERN: Hundreds of policemen from various cadres have been killed in attacks by Maoists, mostly in the past two decades. PTI

The latest ambush by Maoist rebels on a large contingent of security personnel in Bastar is yet another well-planned and ruthlessly executed attack in a long line of similar attacks in the Maoist-infested regions of central India.

Hundreds of policemen from various cadres have been killed in attacks, mostly in the past two decades, by well-armed Maoist rebels in the region. Often, the pattern of their ambushes is similar to that of the past. It’s either on a large posse of security personnel making their way back to camp after a tiring few days of operations in the jungles and when their guard is down. Or, it is an attack on a police camp, which can never be quite completely fortified.

But there are ways to prevent such massacres. This requires a top-down approach, and not a bottom-up one, to address the challenges across the several states where insurgency has existed for at least three decades, much like the way the Indian Army has been deployed in the north-eastern states.

Maoist insurgents have been expanding their footprint across the heartland over the past three decades and their red line of rebellion now runs from Pashupati (in Nepal) to Tirupati (in south India). At its height, the Maoist insurgency was visible in over 200 districts across, most severely, in central India.

And though our earlier Prime Minister Manmohan Singh has stated on record on more than one occasion that the Maoist insurgency “was the single biggest internal security challenge ever faced by our country”, Delhi’s efforts then and now have been a piecemeal exercise.

One problem is the federal nature of India, and the resistance of state governments. It limits what the Central government can do to tackle the challenges comprehensively. One state’s insurgent cannot be a vote bank for another state! Sadly, politics often takes precedence over the safety of citizens, and, in this case, the overstretched policemen operating in these areas, without an adequate senior police leadership.

A decade ago, a DGP of the CRPF had told me that it was a challenge for him to get enough CRPF senior officers (IGs and DIGs) to move out of the comfortable cities that they were based in to command their forces on the battlefields. Since IPS officers neither have the experience nor the inclination to battle insurgencies, they are reluctant to be based in operational areas and their troops are devoid of effective leadership, unlike the Army officers who have to command their troops from operational areas.

One way out is to get the Army to depute senior officers (from colonels to generals) with experience in counter-insurgency operations to command CRPF paramilitary men under the Home Ministry. If the Army can provide officers for the NSG and Establishment 22, which are under the Home Ministry or the PMO, then why not for anti-Maoist operations? Moreover, with the Army being so top heavy, the opening of new avenues for officers will be an opportunity for them, many of whom are doing the job that one brigadier or major-general did decades ago in the corps/command/Army headquarters. And those JCO/NCOs retiring at a relatively young age, with experience in CI Ops can be offered the opportunity to serve in the Maoist-infested zones.

There would be the usual objections — from the Army headquarters and the CRPF — about how this can create inter-service manpower and budgeting issues, but if there is a will, there will be a way. A year ago, a Chinese incursion on the LAC led us to abandon the plans and doctrines that seemed to have been etched in stone. What will it take us to wake up to the threats posed on the lives and limbs of the policemen who are sent into the jungles, again and again, to be slaughtered? A decade ago, the then Home Secretary RK Singh wanted to up the ante by asking for 30,000 men from the Army’s Rashtriya Rifle units and helicopters. But he had run into opposition in Delhi, with the Army Chief reluctant to apply “quick-fix-solutions” by using excessive force.

And with the Maoists having shot down an IAF helicopter in Chhattisgarh’s Sukma district a decade ago, the reluctance to use helicopters — even for non-aggressive operations like reconnaissance and movement of troops to reinforce operations — gathered momentum in New Delhi. This must now be reviewed.

Historically, insurgencies have been contained and eliminated by a three-part strategy that involves: (a) The use of necessary military force to counter the aggressiveness of insurgents; (b) and while military operations are being enforced — although this could take from a few months to few years — the government must have ideas and initiatives ready, with plans for infrastructure upgrades that would address the basic grievances of the alienated people, who took to arms in the first place. (c) finally, when military operations are reduced to a minimum and the ground situation is under control with the implementation of such initiatives, then ‘talks’ must be initiated to address the political demands of the locals, with fixed timelines for political deliverables.

Essentially, there are two ways to confront insurgencies. One is to manage it at a low-key level, like New Delhi has done for decades in the North-East. The other is to go hammer and tongs, as the Sri Lankan forces eventually did against the LTTE, to finish off any serious resistance by the Tamil militants.

Above all, to successfully battle an insurgency, all major governmental agencies must be on the same wavelength. For the armed forces to distance themselves from the challenges of this grave challenge by claiming that this is not their battle (while the insurgencies in the North-East and Kashmir are) shows double standards. The PM and the National Security Adviser would do well to exercise their authority to get the forces to participate in and collectively address a problem that cannot have a knee-jerk approach, notwithstanding strong political warnings that translate to little on the ground.