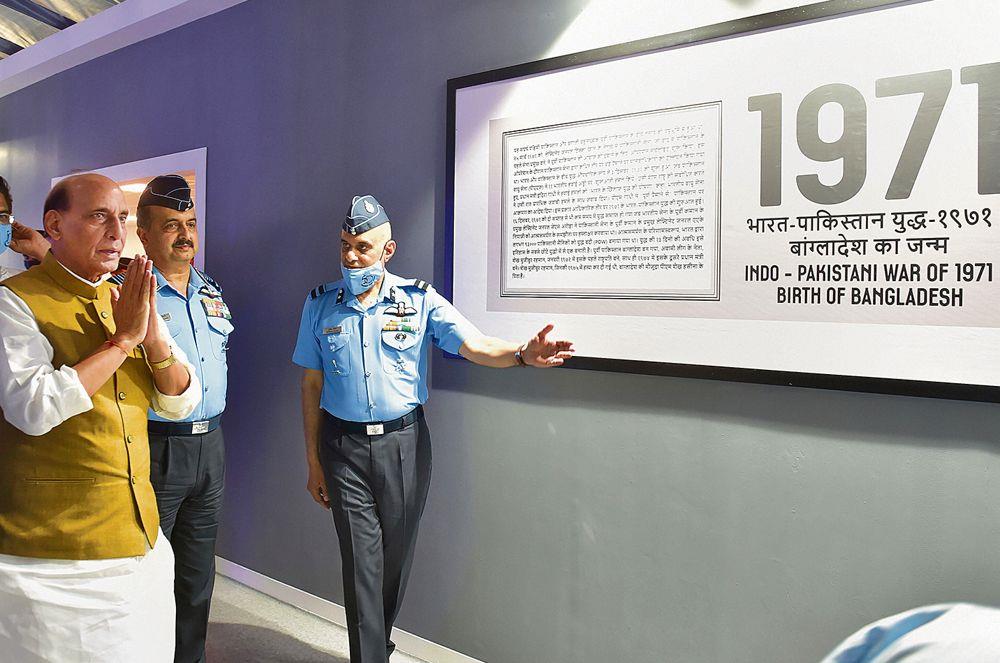 The significant structural changes recently introduced in the functioning of the Defence Ministry and in the Armed Forces Headquarters were evident in a recent three-day conference in Bengaluru, at the Headquarters of the Air Force’s Training Command. The conference was held to mark the 50th year of the 1971 India-Pakistan conflict, and the birth of Bangladesh. The event was inaugurated by Defence Minister Rajnath Singh. The main speakers were Chief of Defence Staff Gen Bipin Rawat and Defence Secretary Ajay Kumar.

India and its Quad partners need to concentrate on expanding cooperation with key organisations like the Gulf Cooperation Council and ASEAN.

It is evident that the three Services — Army, Navy and Air Force — are now functioning in a more integrated and institutionalised structure, where responsibilities and powers are well defined, and structurally integrated. This has been a crucial development, as the earlier defence structure, developed in the colonial times, needed substantive changes to meet the strategic imperatives of the 21st century.

Rajnath Singh asserted that the 1971 War was not fought for conquest, or territory. ‘The congruence of our politico-military thought and actions led to the birth of a new nation (Bangladesh) in Asia, ending injustice and atrocities.’ He added: ‘It was the synergy and cooperation between the three Services and the government that ensured our country’s success in such a huge campaign. The congruence of our country’s politico-military thoughts gave birth to a new nation in Asia, defeating exploitation and injustice, and proving once again that where there is righteousness, there is victory.’ Shunning scoring a political point, he paid tribute to the armed forces, and the country’s political leadership in 1971.

While there were references to Pakistan, the focus of attention was primarily on the challenges now posed by an aggressive and assertive China.

General Rawat, who is also Secretary, Department of Military Affairs, referred to the ‘grey zone warfare’, which covered Pakistan’s resort to terrorism. The emphasis presently is, however, on the security threats posed by China. A worrisome development for India is China’s technological advancement in the cyber and space domains. Aggressive posturing will remain a cornerstone of China’s expansionist policy, which we have to be wary about, General Rawat noted.

A comprehensive account of challenges posed by China came from Defence Secretary Ajay Kumar. He said: ‘We cannot ignore what China has aimed for itself. It wants to be merely a regional power no more, but aims to be a world-class military power by 2049. It has increased capabilities in land, space and cyber domains in the last decade, especially in electro-magnetic spectrum and drones, among other things.’

Presentations by former military officials and diplomats, who included Lt Gen Ata Hasnain (retd) and this writer, which followed the views expressed by the minister and serving officials, were largely focused on China’s role in the Indo-Pacific, including in the subcontinent. They also focused substantive attention on China’s role in Pakistan, Afghanistan, and across the Indian Ocean. It was clear that China has adopted a long-term policy of ‘strategic containment’ of India, backed by its unprecedented long-term role in assisting Pakistan to develop and deploy nuclear weapons and ballistic missiles capable of hitting targets ranging from New Delhi to the Andaman and Nicobar Islands. China has also followed a policy of backing political parties and individuals in India’s neighbouring South Asian countries, who are to be used to undermine relations with India.

India is strategically located and is in a position to exercise maritime influence across the sea lanes of the Indian Ocean, from the oil-rich Straits of Hormuz to the Straits of Malacca, through which 36 million barrels of oil traverse daily. This maritime route accounts for 64% of global oil trade. China’s major worries about Quad arise from the grouping’s ability to control the flows of its vital energy needs through the Indian Ocean. India and its Quad partners need to concentrate on expanding cooperation in a coordinated manner with key organisations like the Gulf Cooperation Council and ASEAN. China is seen as an acquisitive power that has maritime and land boundary disputes with no less than 16 countries across the Indo-Pacific Region. Moreover, China’s policies have also been aimed at becoming the pre-eminent power across South Asia, whether in Nepal, Sri Lanka, Bangladesh, the Maldives, or Bhutan, located at India’s doorstep. Beijing conducts its policies in South Asia and beyond, in close cooperation and coordination with its partners in Rawalpindi.

While Pakistan will seek to not permit SAARC to play any constructive role in South Asia, India needs to activate groupings like BIMSTEC, which includes its Southeast Asian neighbours, to promote regional connectivity within South Asia and with its ASEAN partners. According to plans drawn up two decades ago, South Asia should now have been a thriving, economically integrated region that has sadly, not happened, primarily because Pakistan constantly undermined moves for greater economic integration in South Asia. Pakistan, meanwhile, believes that its interests are better served by increasing linkages and economic integration with Afghanistan, and in Central Asia. That is easier said than done. India has, in the past, demonstrated the importance of its close relations with Iran, the Gulf Arab countries, and Tajikistan in Central Asia, even as its relations with Russia remain on a firm footing.