Redolent of Mao’s policy, the 5-point agreement with China is no breakthrough 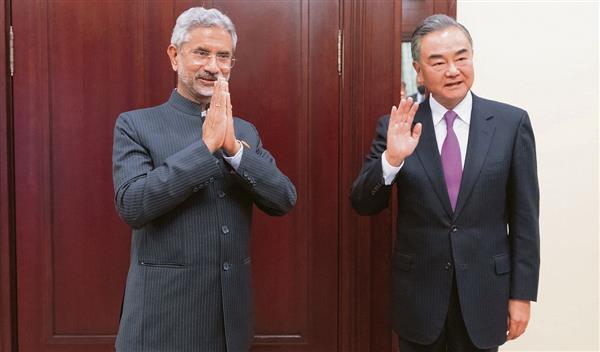 Sealed: Now that China has crossed the line of aggression, the Quad alliance has become a military and diplomatic imperative for India.

The expression ‘confidence-building measures’ is magical; any mention of CBMs triggers immediate goodwill in our polity and leads to a sense of bonhomie. The five-point agreement between foreign ministers of India and China, S Jaishankar and Wang Yi, ends with the two sides deciding to ‘expedite work to conclude confidence-building measures to maintain and enhance peace and tranquillity in the border areas.’ But a close reading of all five points tells that it is too early to pop the cork.

The first point talks of not allowing differences to become disputes. Unfortunately, the differences have already turned into a warlike dispute and have taken a toll of 20 Indian soldiers, including their CO. Then, the foreign ministers have asked the troops to continue their dialogue, quickly disengage, maintain distance and ease tensions. Many rounds of talks at the brigade and command levels dragged on while the situation kept on escalating, with the troops even opening fire. The third one calls for avoiding ‘any action that could escalate matters’ when escalation is at its peak, with the two countries on the razor’s edge, atop the Himalayas. The continuation of dialogue and communication through Special Representatives and the working mechanism for consultation and coordination, which is the fourth point, have not made any difference all these months. And finally, the spelling out of the soothing CBM word concludes the agreement.

Does this amount to a breakthrough? Chinese scholars look at their past to explain the present, particularly while analysing the actions of the omnipotent President Xi Jinping, who has fashioned himself as Mao Zedong II. For Indians, the recent Chinese conundrum has been in attempting to understand the strategic objectives of Xi in initiating the incursions and border clashes in Ladakh. Many see this as a tactical move to cut off the Daulat Beg Oldie airstrip and eventually Siachen, but it is much bigger than that. The Chinese provocation amounts to an act of aggression, which has the potential to trigger conflict, and why would a strong leader do that unless he aims to consolidate his position in the domestic and international arena? If he is weak, as some Chinese dissidents claim, he is desperately trying to convince his domestic audience of the efficacy of his muscular leadership; or else, if he is strong, he is staging a grand proclamation from the roof of the world. Either way, Xi has chosen India as his target.

In this context, the agreement reminds us of Mao’s policy of fighting and talking while he deceived Chiang Kai-shek’s Kuomintang, or nationalist forces, and eventually defeated them. After the 1945 Sino-Soviet treaty, Chiang invited Mao to Chongqing and the latter flew in with the then US ambassador Patrick Hurley. According to historian Frank Dikotter’s account in The Tragedy of Liberation, “Mao stayed full six weeks wrangling for concessions even as pitched battles between the communists and nationalists continued on the ground. Eventually on 18 September, Mao proclaimed: ‘We must stop the civil war and all parties must unite under the leadership of Chairman Chiang to build a modern China.’ A formal statement was made on 10 October… Back in Yan’an a few days later, Mao explained to his comrades that the agreed statement in Chongqing was ‘a mere scrap of paper’… Mao would agree to almost anything on paper as long as nobody was checking what he was doing on the ground.”

This is the lesson Indian politicians, diplomats and Generals ought to remember while dealing with Chinese agreements on disengagements, de-escalation and CBMs. Just as the 1962 war with India cemented Mao’s prestige, crushing his detractors at home, and announcing the arrival of a major power at the international fora, Xi needs validation in these times of economic downturn and decoupling with the West. China considers the Tibetan borders vulnerable ever since the Dalai Lama sought asylum in 1959. It was Indian naiveté to have ignored the Chinese threat after offering refuge to Tibetans. The choice of Ladakh as the theatre of conflict by China could have been prompted by historical perceptions of vulnerability accentuated by the creation of the UT of Ladakh and the rhetoric of Home Minister Amit Shah in Parliament last year on capturing Aksai Chin. But the intent of the aggression remains naked expression of power.

Xi seems to have calculated that a conflict with India would be a low-cost, high-yield gamble on the eve of the first of the two centenary goals that he announced in the 18th party congress in 2012, when he took over the reins of the party and the government. The year 2021 marks the centenary of the founding of the Chinese Communist Party and Xi had vowed to achieve the ‘China dream’ of the great rejuvenation of the nation by achieving milestones in economy, clean energy, space, cyber technology, and, of course, military. In the middle of a raging pandemic and an economic slump, what better way to achieve greatness than a limited war? A war which can threaten northern and eastern Indian cities while remaining limited to the mountain tops.

In fact, the Ladakh incursions could even be a low-cost Chinese response to the US attempts at containment, with an underlying confidence that the US, without a military alliance, will not come to India’s aid. India has always managed contradictions, be it its ties with the US and Russia, or Iran and the Arabs; so India’s participation in Quad alone could not have prompted such a massive warlike Chinese buildup on the borders. Now that China has crossed the line of aggression, the Quad alliance has become a military and diplomatic imperative for India.

After all, China understands military alliances better than us because, contrary to what Indian Maoists believe, the revolution didn’t happen by villages magically encircling cities. Xi would remember Mao pledging that ‘Chinese democracy must follow the American path’, simply to cut off US supplies to the Kuomintang, while Stalin was pumping in 7 lakh rifles, 18,000 machine guns, 860 aircraft and 4,000 artillery pieces for the communists.