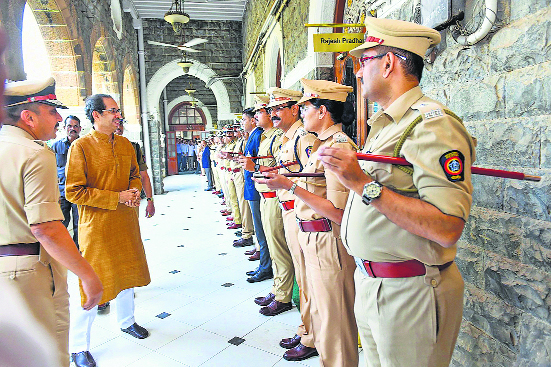 Diluted authority: When officers assigned to assist the police chief are appointed on political considerations, they know that the DGP does not count in the scheme of things.

There is going to be a change in the Maharashtra Police leadership very shortly, and it is going to be for the worse. Even if a fairly honest and capable replacement is chosen for the present incumbent, it will be less than easy for him or her to measure up to Subodh Jaiswal’s quality of leadership.

Officers recruited to the IAS and the IPS take an oath to the Constitution, and not to the government of the day.

Jaiswal was plucked out of RAW where he had a more than probable chance of becoming the chief. The people of Mumbai had him as the Police Commissioner to replace an equally outstanding officer, Datta Padsalgikar, who is now the Deputy NSA to Ajit Doval. When Datta retired six months later as DGP of the state, Subodh succeeded him.

The political leadership of the three party coalition that constitutes the ‘Aghadi’ that rules the state have found that Subodh ‘interferes in transfers and postings’! The new leadership is convinced that it is the divine right of politicians to politicise the police by putting convenient ‘yes men’ at the cutting edge so that the law is interpreted with their political interests in mind and not according to the facts and the Constitution.

Gopalakrishnan Shankaran, a retired IAS officer and author of the book, Yes Men Are Dangerous, mentions that even Rajnath Singh, the then Home Minister (now Defence Minister) in Modiji’s Cabinet, in a talk to top bureaucrats in 2017, warned them to desist from becoming ‘yes men’ and stop accepting orders that contravene the law!

Field Marshal Sam Manekshaw had this to say on the subject: “The ‘yes man’ is a dangerous man. He is a menace. He will go far, he can become a Secretary to government, a minister or even a Field Marshal, but never a respected leader of men. He will be used by his superiors, disliked by his colleagues and despised by his subordinates. So, discard the ‘yes man’.”

Sardar Vallabhbhai Patel is remembered by the party now in power at the Centre as one to emulate. Why does the government of Modiji not circulate his sage advice to civil servants? ‘A civil servant cannot afford to, and must not, take part in politics. Must not involve himself in communal wrangles. To depart from the path of rectitude in either of these respects is to debase public service and lower its dignity.’ I have quoted these wise pieces of advice of Sardar Patel, Manekshaw and Rajnath Singh from Shankaran’s book.

Shankaran is an honoured member of the Constitutional Conduct Group (CCG), a meeting of like-minded IAS, IFS and IPS officers and from the Central Civil Services, who have been voicing their concerns about unjust actions or inactions of governments in power and the politicisation of the Civil Services.

Jaiswal asked to be sent on deputation to the Central government when his advice on postings and transfers of senior IPS officers was not being taken into consideration, thus reducing him to a mere figurehead! The Shiv Sena-led government promptly accepted his request and recommended it to the Centre. It obviously preferred a ‘yes man’. When officers assigned to assist the police chief are appointed on political and not administrative considerations, these officers know that the DGP does not count in the scheme of things! What then is the use of arming him with a lofty moniker like Director General of Police when he himself is being directed?

In the recent faux pas of the arrest of Arnab Goswami, I am sure Jaiswal was not consulted. Secrecy surrounded the entire operation, with only the SP of Raigarh and the Police Commissioner of Mumbai in the government’s inner circle. The government was afraid of contrary advice.

When officers are recruited to the IAS and the IPS, they take an oath to the Constitution, and not to the government of the day! They take an oath to serve the people of India and not the party in power. They join the service to serve as IAS or IPS officers and not to become politicians. During my own service, I had occasion to remind my political boss, Minister of State for Home, Vilasrao Deshmukh, in my parent cadre of Maharashtra, and Buta Singh, the Union Home Minister, that I had not joined the IPS to help politicians to win elections! Municipal elections in case of the former, and the SGPC elections in the latter.

The CCG is contemplating to write to the director of the academy at Mussoorie to direct every probationer to read Shankaran’s book so that each of them takes a principled stand, like Jaiswal did in Maharashtra, not to concur with wrong, very often illegal, orders of their political bosses. If all officers stand together and resist, there is nothing the politicians can do to make them conform.

But that can only be a utopian dream. Considering the role of unalloyed ambition or the warped value systems prevailing among some youth today, unity among service officers to repulse the political onslaught on their citadels, can best be forgotten. I once asked a young officer I personally knew, even before he joined the IPS, why he was lobbying for a particular job. His reply was that all his colleagues were also lobbying for the same job and he would lose out if he did not join the rat race!

If IPS officers themselves are reduced to begging and selling their soul to the political class, there is little hope for a better security system for the people’s safety. The dangerous ‘yes men’ will take over. Only public opinion can succeed to stop a rot which afflicts all institutions of governance at this juncture.