The effect that won Nobel 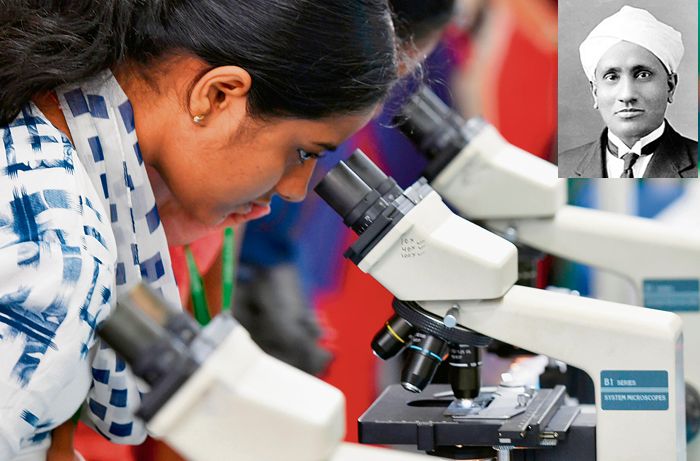 Not true: A story often repeated is that Raman used inexpensive instruments. Politicians use it to assert that scientists should be able to work with limited resources.

Every year, National Science Day is observed on February 28. The day was instituted in 1987 in the run-up to the birth centenary of Indian physics Nobel laureate Sir Chandrasekhara Venkat Raman. February 28 is not Raman’s birthday, but it was chosen since it was on this day in 1928 that Raman announced his discovery to the world. He had observed that when a light beam was passed through a liquid or gas, a small part of the scattered beam had a wavelength different from the incident light. This came to be known as the ‘Raman effect’, which won him the Nobel Prize in 1930. After sending details of the discovery in a research paper to the international scientific journal Nature, Raman continued with experiments, and on February 28, 1928, he decided to inform newspapers in Kolkata. This means the real significance of the discovery became clear to Raman only on that day.

Raman’s Nobel in the early decades of the 20th century remains the high point in Indian science, and has been a subject of several myths and stories that keep surfacing from time to time. The most popular among them is about Raman crying while receiving the prize because he did so under the British flag.

Given the huge interest in Raman in India even in the 21st century, his life continues to attract historians of science. New facets of his life are emerging as historians dig into primary material available in India as well as different archives in Europe (Raman had great relations with leading European scientists of his time). The recent work of Prof Rajinder Singh, a historian of science who hails from Jalandhar and is now settled in Germany, has thrown new light on Raman. This work shatters popular myths surrounding Raman, and in fact, shows that Raman himself may have been responsible for perpetuating some of them.

A story that is repeated every year on National Science Day is that Raman made the Nobel-winning discovery using instruments that cost just a few hundred rupees. This has been used by politicians to tell scientists that they should be able to work with limited resources, as Raman did a century ago. ‘Compared to CV Raman’s days, facilities have grown 1,000-fold and it should reflect in the outcome also’, the minister for science and technology had said two years ago.

Prof Singh, through documentary evidence and original material, has shown that the laboratory of Raman at the Indian Association for Cultivation of Science (IACS) in Kolkata — where he made the path-breaking discovery — was well funded in terms of research facilities and equipment (Indian and imported), scientific journals and researchers to work with him.

In the foyer of the present campus of the IACS, a spectrograph is on display with a label saying this was the instrument used to discover the Raman effect. This is only partially correct. This spectrograph was among dozens of instruments used by Raman, as is clear from the four research papers published by him relating to the discovery. Based on correspondence about Raman seeking research grants from Calcutta University and philanthropists like GD Birla, Prof Singh has calculated the cost of scientific instruments used by Raman at the IACS to be Rs 7,630. This includes instruments imported from London-based supplier, Adam Hilger Limited. Raman’s other resource was a large pool of research associates — there were 32 of them working in his laboratory in 1928. His laboratory was well equipped, adequately funded and fully manned. This also reflected in the large number of research papers published by Raman and his associates at the IACS.

Another myth about Raman that Prof Singh has busted is about Raman breaking down during the Nobel ceremony in 1930 because he felt humiliated receiving the honour under the British flag. Interviews that Raman and Lady Raman gave to the media on their return had no such mention, though there was a talk of ‘tears of joy’. Press reports quoting Raman had said: ‘He really shed tears of joy while in the act of receiving the Nobel Prize when he thought of the honour that was shown to India by the King of Sweden.’ In detailed accounts of the ceremony given to journalists, Lady Raman said: ‘When Raman’s name was called, the whole audience, including the King, stood up and the British flag was held aloft. The laureate then approached the royal seat and bowed before the King, who took him by the hand and presented him the Nobel Medal, Prize and Diploma.’ In fact, when Raman was knighted by the British in 1929, he wanted to receive the honour from the King in England. This did not work and the ceremony had to be held in India. The bit about Raman getting upset about the British flag crept into media reports in 1948 when there was coverage about the 20th anniversary of Raman’s Nobel.

The scientist carefully harnessed the power of newspapers to publicise the discovery of the Raman effect and reaction of the international scientific community to the same. He also wanted to spread the message in Europe to bring it to the notice of the Nobel committee. Like any other scientist interested in garnering attention and funding for his or her research, Raman engaged extensively with Indian and international press. It was during these interactions that he advanced the myth about shortage of funds and resources at the IACS by touting how he had to work with meagre sums. Winning the Nobel early in his career had propelled Raman to the status of a demi-god in India, but he was fallible like any other human. This, however, does not diminish his scientific achievements and legacy.