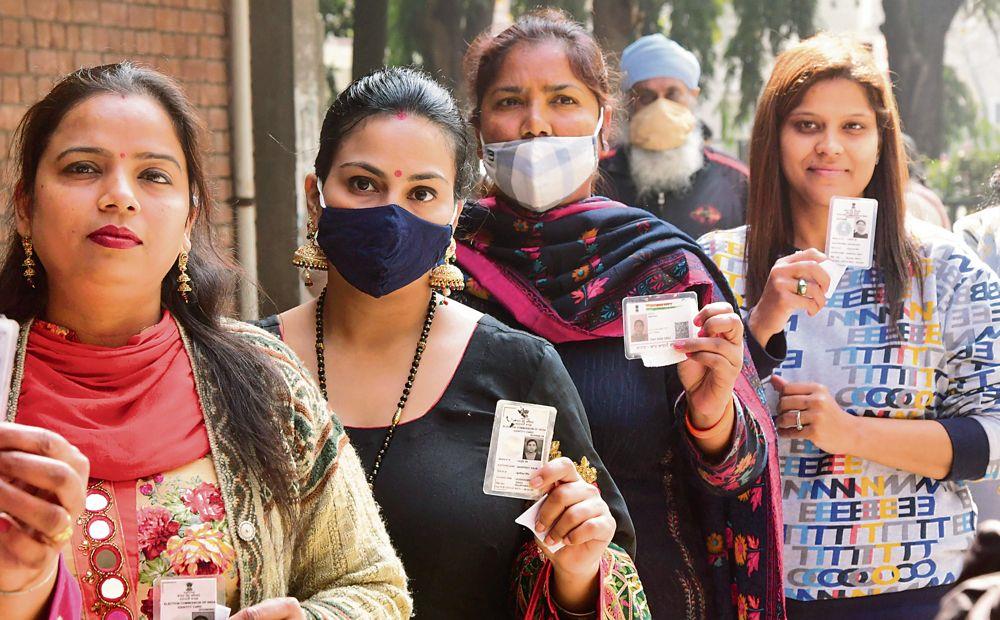 Informed: Political awareness is growing by leaps and bounds in women. Tribune photo

Another March 8 is here. This year’s global theme for Women’s Day is ‘Women in leadership: Achieving an equal future in a Covid-19 world’. It underlines the need for greater women’s representation in leadership roles, so as to face the new challenges that have been thrown up by the pandemic.

In India, women who helm political parties or represent people in Parliament and Assemblies are not large in numbers, but some have been making waves. Two women hogged the headlines last week — Mamata Banerjee and Sasikala.

The feisty Mamata accepted the BJP’s challenge to contest only from one constituency — Nandigram — where she will face her one-time lieutenant, Suvendu Adhikari, who helped her win the battle of Nandigram which catapulted her to power in 2011. But he has now joined the BJP.

Whatever be the outcome of the battle for Bengal — and the BJP is pulling out all stops, with the PM to address 20 meetings, Amit Shah many more — it is ‘Bengal’s daughter’ Mamata who has become the central theme of poll 2021, and the biggest symbol of the fight against the Modi-Shah politics.

The challenge for her is not just to retain power, or for Modi-Shah to wrest it from her, it is to put out a blueprint for how they are going to grapple with the unprecedented situation brought on by the pandemic. More women lost their jobs than men. Girls are being pulled out of school, subjected to sexual violence, and married early so that they are not a burden on their families, negating the gains of the last 25 years.

The International Women’s Day, celebrated since the start of the UN Women’s Decade in 1975, is an occasion to honour women. But it is also time to take stock, and this year to look again at women’s abysmally low participation in politics.

Women in India have breached every ceiling, as lawyers, corporate heads, scientists, pilots, you name it they are there. But in the Lok Sabha, they are just over 14%, and 2019 showed an improvement of 3%, mainly because of the impressive strike rate (over 70%) of the women who fought on the BJP ticket. Their winnability — an argument made against giving women tickets — was more than that of male candidates. But 74 years after Independence, surely that is not good enough?

The numbers in state Assemblies are even more pathetic. This, when women are coming out in larger numbers to vote. In several states they outnumber the men. In ‘Bihar 2020’, women voters were 5% more than men.

Women are also slowly evolving as a vote bank. There were instances of women voting together on an issue — like Ram Mandir in UP in the ’90s. The joke used to be that women in Mulayam Singh Yadav’s family had voted against his party. Or after Indira Gandhi’s assassination in 1984, when more women (5%) came out to vote than men.

Of late, they have begun to vote on the issues that affect them directly, like prohibition, which reduces domestic violence and releases more money for basic necessities. Prohibition — and cycles for girls to go to school — won Nitish Kumar the loyalty of women voters. It is they who bailed him out of a sticky situation last year.

Mamata has also been assiduously cultivating the women’s constituency, giving more tickets to women, and encouraging TMC women MPs to speak fearlessly. Mahua Moitra is emerging as the most strident critic of the BJP government in the Lok Sabha.

Political awareness is growing by leaps and bounds in women. The large number of protesting women from farming families who camped on Delhi borders sleeping out in the open during winter months would have been unthinkable some years ago. The powerful khaps in the Jat community that have held a conservative view about the role women should play encouraged their participation. Protesting women farmers have made it to the covers of international magazines.

It is the grandmothers who led the anti-CAA stir at Shaheen Bagh last year, which became a symbol of protest by Muslim women who used to be confined to their homes. ‘Exposure’ has its own ripple effect. It is a genie you cannot put back into the bottle.

Disha Ravi, a climate change activist who supported the farmers’ movement, and labour activist Nodeep Kaur, both arrested for their beliefs, represent an aspirational India from where the new leadership is going to emerge.

There is also a pool of women who have been readied for roles in governance. There are two million of them in the panchayats and local bodies. This leadership has been in the making for the last 30 years since the enactment of the 73rd and 74th constitutional amendments, giving greater autonomy to the local bodies and one-third representation to women, with 30% of leadership roles reserved for them.

For all their initial hesitation as proxies for their menfolk, studies have found that, by and large, women sarpanches tend to focus more on basic issues of food, education, health and safety. This is a crop of talent which must now play a larger role in state Assemblies and in Parliament.

The time has come to revive the debate on how to ensure greater representation to women in Parliament and Assemblies. And to pull out the women’s reservation Bill, introduced in 1996, and is now gathering dust.

It was an evocative moment in 1947, when Hansa Mehta, a member of the Constituent Assembly which drafted the Constitution, handed over the National Flag to Dr Rajendra Prasad, with the words, ‘It is in the fitness of things that the first flag flying over this august House should be the gift from the women of India.’

On March 12, PM Modi is going to kick off the celebrations to mark 75 years of Independence. There is a new Parliament building in the making. It will have seating for 1,224 members, almost double the present capacity.

It will be only in the ‘fitness of things’ if the new Parliament can commence its functioning with a law to give one-third representation in Parliament to the women of India.