The end of moral authority

With the Hathras case, the insensitive regime may have reached an inflexion point 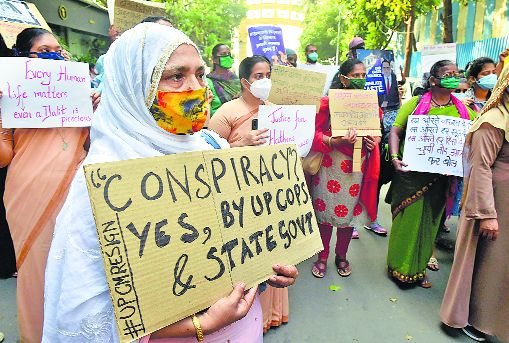 Speaking out: Despite the regime’s political support, the communal-authoritarian template hasn’t gone unchallenged.

The gruesome Hathras gangrape has sent shockwaves across the country. Even more shocking is the way the police cremated her body late in the night. It lends credence to the suspicions of a cover-up and family’s claims of threats from the administration. The combination of upper-caste arrogance and the callousness of the state has provoked protests against the UP Government’s mishandling of the case. It has brought the spotlight back on UP’s authoritarian-majoritarian regime and how unsafe it is for the marginalised groups and for dissidents who dare to question the ruling dispensation.

The appointment of Ajay Singh Bisht, head of the Gorakhpur mutt as CM was a turning point in erecting this oppressive majoritarian vertical. It marked a watershed as his entire political career revolved around fuelling hate against Muslims as public enemies. Apart from the communal dimension, a strong upper-caste assertion, especially of Thakurs, has also shaped the political landscape in recent years, driven by the desire to regain prominence diluted by the Mandal interregnum and the transfer of power to the lower castes.

Indiscriminate arrests, naming and shaming protesters, extra-judicial killings, and crackdown on dissent are principal features of this structure. The police can be sent anywhere to serve notice on journalists and citizens to stop them from participating in protests. Clamping down on dissent was manifest in the suppression of anti-CAA protests. Muslim activists were thrown into prison for allegedly instigating riots last winter, while many others were let off. The police have been given a free hand to put away protesters in Hathras.

The brute display of power by the police and the communalisation of dissent is not uncommon. The use of sexual violence as a weapon for subjugation of lower castes is also not uncommon. While crimes against Dalits have continued under all dispensations, the behaviour of the government and police in Hathras has been unprecedented. What is new is the use of state power to intimidate the victim’s family and political leaders who are championing their cause. The district was placed under Section 144 to stop the media, leaders, and activists from reaching the village, even as an upper-caste panchayat to defend the accused was underway. Rahul Gandhi and Priyanka Gandhi’s first attempts to visit the family ended in an altercation with cops who refused to let them go. Leaders of the TMC, AAP, RLD and Bhim Army were lathicharged on their way to Hathras. However, the Opposition stood steadfast, which surprised the regime. This forced them to wield the stick. This has ended up damaging the Modi brand.

The response to the Hathras horror demonstrates a political template which seems to rest on the belief that law enforcement is not a measure for ensuring justice but a means to impose punishments for crimes the government claims have been committed by leaders and protesters, regardless of evidence. The stock response is to demonise and stigmatise anti-government protesters, while ignoring the provocative calls to violence by many groups associated with the ruling party. The government claims to have uncovered an ‘international plot’, led by four Muslims, working through a cut-and-paste website, to defame the government and provoke riots.

It is the job of opposition leaders to oppose, but not so in UP, where any attempt to oppose the government is thwarted by imposition of Section 144. This is unlike the situation before 2014, when there was a flurry of public protests in 2011-12 which eventually led to the downfall of the UPA. The anti-corruption movement in 2011 in Congress-ruled Delhi and demonstrations in 2012, demanding justice for Nirbhaya, would be unthinkable anywhere in UP today. The Congress did not try to deny rape or misuse terror charges to deflect attention from the heinous crime. Despite much greater sensitivity shown by the Congress government, the Nirbhaya case punctured the legitimacy of the UPA government which contributed in turning the tide of public opinion, alongside the anti-corruption movement, against the government.

Despite the regime’s political support, the communal-authoritarian template hasn’t gone unchallenged. The protests against the CAA and the Hathras crime underline significant roadblocks to the advance of Hindutva forces. The outrage has served the broader political purpose of exposing the regressiveness of the government and the limits of its socio-political dominance. Opposition parties are protesting in this case unlike the anti-CAA protests which were essentially a civil society campaign, which the BJP used to polarise the electorate. There is a crucial difference between issues concerning Muslims and Dalits. Muslims have been demonised and their marginalisation is part of a conscious majoritarian agenda. The same cannot be said about political campaigns seeking justice for victims of the caste system which draws on a cross-party consensus. This is why denial of justice to a Dalit family can hurt the BJP, especially as its success in the heartland revolved around crafting a broad-based Hindu identity to co-opt Dalits and OBCs.

Growing authoritarianism in UP has widened the politics of division which is an antithesis of what needs to be done. Political calculations focused on maximising power and misguided notions of the popular mandate appear to outweigh any consideration how institutions should function in a democratic setup. An elected government is effective because of the moral authority it commands and the manner in which the government exercises power. Institutions provide a framework of rights and wrongs, and governments function by persuading voters that they are doing the right thing. But in UP, the moral authority to do so has been eroded by elected leaders who continue to steamroll norms associated with social justice and political decency. With the Hathras case, this insensitive regime may have reached an inflexion point marking the end of its moral authority altogether.