The fall into infamy

India’s image and credibility are taking a beating, and it does matter 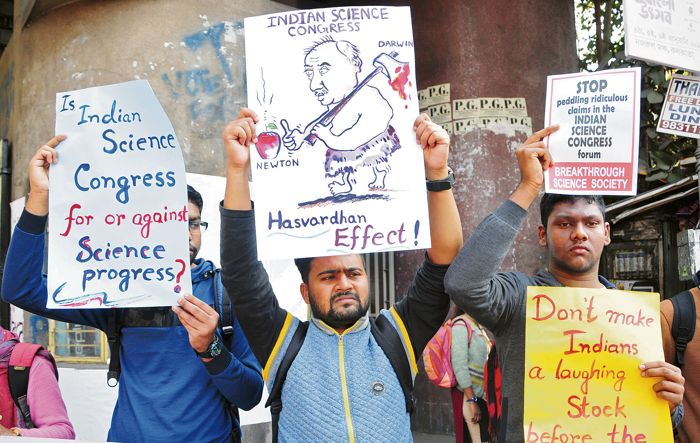 Keep the temper: Pride in ancient India’s achievements in science should inspire scientific pursuits of modern India, not hamper them.

India has been having a bad press lately and not only among the usual suspects — The New York Times, The Washington Post and The Economist — but also among, for example, the Qatar-based Al Jazeera and the neighbourhood media. At the governmental level, too, voices which were muted are now beginning to surface, particularly after the communal riots in Delhi recently. The PM has assiduously cultivated an image of an international statesman, courted by leaders across the world. This has taken a dent.

India’s enhanced international standing in recent years owed to a number of factors. Most importantly, is its emergence as the fastest growing large emerging economy, making it an attractive market and investment destination. Its potential to sustain rapid growth over the next decades rests with its young population delivering a demographic dividend. Almost as important, is its success as a vibrant plural democracy able to manage diversity, a quality relevant to an increasingly globalised world. Reinforcing these assets are the undoubted achievements of its scientists and technologists to create world-class nuclear and space programmes and a much-envied IT industry. If the world of tomorrow will belong to knowledge societies, India has been seen as a leading contender. On each of these counts India’s international standing is being eroded. An economy growing at 4.7% will not be as attractive as one registering 8-9% growth. The anxieties about India’s economic prospects are compounded by the persistence of a festering banking crisis, the virtual absence of fresh domestic private investment and stagnating exports. The decision to opt out of the Regional Cooperation for Economic Partnership (RCEP), the stated intent to review free trade agreements and the virtual return to a pre-1991 import substitution strategy, diminish India’s regional and global economic profile. The coronavirus epidemic will exacerbate these negative economic factors.

India has undergone several political and economic crises in the past but its outstanding success as a functioning plural democracy has never been in question. It has also been admired for the credibility of its institutions, such as an independent judiciary, a professional Election Commission and oversight institutions like the CAG. Until recently, the Central Statistics Office enjoyed credibility for its professionalism and independent assessments and evaluation. On each of these counts, the high standards and norms observed in the past have been eroded. The controversy surrounding the CAA and the openly communal overtones in treating dissent over its contents raise questions about the government’s commitment to uphold constitutional principles. Political discourse sank to a new low during the recent Delhi campaign and provided the backdrop to the riots. Unlike in the past, these unfortunate events played out in front of TV cameras and were caught in horrific images recorded on social media. These began to be seen as the inevitable climax to a series of political acts of the government since its re-election, including the abrogation of Article 370, the adoption of the CAA and the stated intent to have a nationwide NRC on the lines of the highly controversial and deeply divisive NPR exercise in Assam. The government has conveyed assurances that its actions are non-partisan and non-sectarian but politics is about perceptions, and on this count the government is failing both at home and abroad.

India’s space and nuclear programmes and its vibrant IT industry present an image of modernity and high-tech aspirations. But when political leaders, and even scientists, begin to spout claims about the therapeutic qualities of cow urine and dung or make claims about nuclear weapons and guided missiles being developed in ancient India, the much-vaunted ‘scientific temper’ that Nehru tried to cultivate among a tradition-bound people, often prone to superstitious beliefs, begins to falter. India becomes the object of ridicule even as its space programme invites deep admiration. There should be pride in ancient India’s many remarkable achievements in science and they should inspire scientific pursuits of modern India. We must avoid extolling the past as a substitute for the hard work required to develop capabilities for the future.

As against these negative factors, the consolidation of a government enjoying parliamentary majority, the undoubted popularity and unflagging energy of PM Modi, and a still vocal and active civil society, these are significant positive factors. These hold the promise of overcoming the negative factors. They cannot be a substitute for them.

There is an assumption that as long as criticism from governments are muted one may ignore that emanating from foreign media, civil society or legislatures. Governments may refrain from criticism but they will extract a price for doing so. Even if governments are prepared to engage with India transactionally, they may be constrained from doing so by their legislatures or strong public opinion. A strong leader-to-leader engagement, favoured by Modi, cannot neutralise such constraints.

India’s international reputation and credibility has been built up over decades and are a valuable asset. They can enhance the leverage bestowed by economic and security capabilities, but also soften the impact of unfavourable developments in difficult times. This is not an argument for a more effective public relations exercise but a plea to reaffirm the balance between preserving India’s civilisational values and the pursuit of modernity that is the very essence of our Constitution. Image is most potent when it reflects positive reality.