The grand illusion of Centre-state cooperation

The PM’s claim of Centre-state bhagidari merits a closer look. The basic principle is that the states can avail of increased credit facility — 1 per cent of state GDP — if reforms directed by the Centre are implemented. In plain terms, the reforms were forced upon the states by the economic crunch caused by the pandemic. And the PM is arguing that this is the way to carry forward reforms. 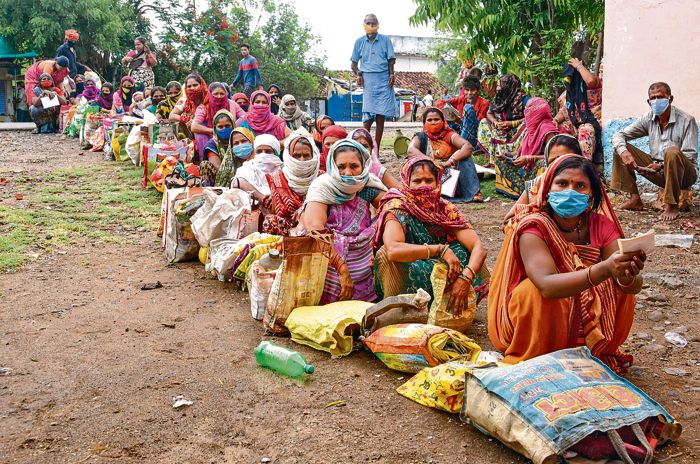 Flawed approach: The ‘one nation one ration card’ reform should have been carried out as a direct response to the pandemic-induced crisis, not as a carrot-and-stick policy. PTI

Prime Minister Narendra Modi rarely speaks of the nitty-gritty of governance. It is as though he leaves it to the ministers, if ever, or to the bureaucrats mostly. So, it was a surprise that he chose to write a blog on June 22 in which he talked about how he was successful in pushing the states to carry out certain reforms like ‘one nation one ration card’, simplifying the business licensing process, notifying floor rates for property tax, bringing in revenue for the municipalities which could help in paying the wages of municipal workers, and the implementation of direct benefit transfer (DBT) in lieu of free electricity and water supply. He argues that the last reform has checked the wastage of power and water. These reforms had to be implemented by the state governments, and these changes would have taken a longer time if the Centre did not offer the incentive of raising the credit facility by 1 per cent of the state GDP apart from another 1 per cent increase in credit facility due to the Covid-19 crisis and the economic crunch it caused.

The Prime Minister reveals that many of the states had adopted the governance changes and they availed of the 1 per cent credit that was offered in its wake, and this amounted to Rs 1.06 lakh crore in 2020-21. And he concludes that this showed that reforms can be implemented not through stealth and compulsion as it was done earlier, but through conviction and incentives as it was done by his government. And he calls this ‘Centre-state bhagidari’, another variant of his formulation of cooperative federalism.

It is an interesting claim, and it merits a closer look. The basic principle is that the states can avail increased credit facility — 1 per cent of the state GDP — if reforms directed by the Centre are implemented. In plain terms, it is a carrot-and-stick policy, and it was forced upon the states by the economic crunch caused by the pandemic, and the Centre seems to have felt that this was the best time to force the states to adopt the slated reforms. And the PM is arguing that this is the way to carry forward reforms, implying that it would have to be another crisis like the pandemic, a time when the states are in need for additional finance, and this finance is not provided by way of grant but by loosening the credit strings. And then calling it an act of partnership between the Centre and the states does not sound right. There is something in all this that is not falling in place.

The PM seems to overlook the fact that the Centre is taking advantage of a crisis — a national medical emergency — to force the states to swallow a bitter pill. Economic reforms, at the best of times, should happen when there is no crunch or crisis, but they are undertaken because they would improve the finances of the states and the economic well-being of the people, and in the words of the Prime Minister, “Each of the reforms was linked to improve ease of living to the public, particularly the poor, the vulnerable and middle class.” And the second aim was to “promote fiscal sustainability.” It can be argued that changes happen only in response to a crisis. But to arm-twist the states to adopt reforms at a time when they should be focusing on dealing with the plight of the people seems an odd argument. It is possible to argue that ‘one nation one ration card’ was particularly helpful amid the pandemic when the poor migrants were shuttling between cities and villages. But this should have been done as a direct response to the crisis triggered by the pandemic, and not as a carrot-and-stick policy, the kind that lending institutions like the International Monetary Fund (IMF) adopted towards countries in economic distress, as India was in 1991. And for the PM to describe this as Centre-state cooperation is not very convincing.

It seems the Prime Minister has forgotten that the states in the first decade of this century had adopted electricity reforms by unbundling generation, transmission and distribution to get out of the crisis of state electricity boards (SEBs) sinking under the financial burden and faced with the prospect of bankruptcy, and the state governments not in a position to bail them out, and the continuous shortfall of power which affected industrial development of the respective states. It was a complicated reform and quite painful too, but many state governments undertook power reforms because they were left with no other choice.

The credit incentive offered by the Centre and tying it with the purse strings might seem a clever ploy but it cannot be considered as global best practice. In a federal polity, the Centre should have no say in the financial matters of the states. There was the system of a state government seeking an overdraft from the Reserve Bank of India (RBI), and it depended on the state governments’ promise of exercising control over expenditure. It was purely a financial issue between the state government and the central bank. The states could have sought guarantees from the Central Government, and the RBI could concede the overdraft facility based on the Centre’s guarantees. But after the initial reforms of the 1990s, state governments, particularly Andhra Pradesh under the then Chief Minister N. Chandrababu Naidu, sought loan from private entities like Peerless Insurance. There were pitfalls of turning to private lenders, but it also opened up the possibility of market borrowing by the states.

This was the kind of financial devolution that should characterise economic reforms in a federal polity. India still remains a centralised state with the tax devolution policy, and the issue has been made more complicated by the Goods and Services Tax (GST), where the Centre and states are forced to get together to levy and share taxes. The PM’s argument in his blog claiming success of certain reforms is nothing more than arm-twisting the states to adopt changes in lieu of increased credit access. It is the domination of the Centre over the states by another name.