Relations with Pakistan will hopefully focus on trade, travel, transit and tourism 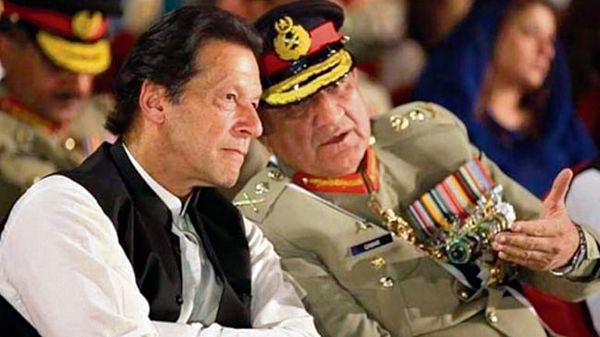 Differing stance: While Imran Khan has been less than diplomatic in his references to India, General Bajwa has been more restrained. File photo

On the eve of its birth in December 1971, Henry Kissinger proclaimed that an independent Bangladesh would be an ‘international basket case’, dependent forever on foreign aid for its survival. Like in everything they said and did, during the Bangladesh liberation struggle, Kissinger and his boss President Nixon were soon proved wrong. Bangladesh has substantially outpaced Pakistan in virtually every social and economic indicator. At the same time, Sheikh Hasina has skilfully managed her relations with China, the West, India and other friends, to their mutual benefit.

It is Pakistan, which is today an ‘international basket case’, constantly looking for doles from China, and G20 nations, apart from international financial institutions, like the World Bank, IMF and Asian Development Bank. It is also struggling to repay its debts and borrowing from Chinese banks to meet its repayment liabilities. Bangladesh is, however, fiscally and economically strong. It is important to bear these facts in mind, when looking for options when dealing with Pakistan.

The warmth with which PM Modi was received in Bangladesh is testimony to how people in Bangladesh still remember the affection with which India received 9 million refugees. The refugees had been driven out of their homes by the depredations of Pakistan’s Gen Tikka Khan. This was an occasion to remember nationally, with Modi praising Indira Gandhi for her decisive leadership in 1971.

Time has moved on, and Bangladesh is today one of the leading exporters of textile products globally. It is proud of its achievements in key human development indicators, like women’s education. India and Bangladesh have resolved their age-old differences, including the demarcation of their land and maritime frontiers. It would, however, be only appropriate to exercise due restraint while speaking on issues of Bangladeshi immigrants in India.

While Bangladesh has made rapid strides in boosting exports, accelerating economic growth and improving human development indicators, the same cannot be said of Pakistan. Islamabad is falling well behind Bangladesh in virtually all development indicators. Apart from fomenting tensions within Bangladesh by its links with radical Islamic groups like the Jamaat-e-Islami and Hefazat-e-Islam, Pakistan has done little to promote economic cooperation with Bangladesh, either bilaterally or regionally.

Having already handed over the Shaksgam Valley in J&K to China, the stage is now being set for China to progressively take over the control of Gilgit-Baltistan, with its growing economic and military presence there. It is only a question of time before China takes over greater control of the port of Gwadar, which it has built in Balochistan. Beijing is already experienced in such takeovers, after assuming control of Sri Lanka’s Hambantota Port. Moreover, Pakistan is in contract for the purchase of four Chinese frigates and eight submarines from China — a move that will only enhance Pakistan’s immense external debt.

Amidst these developments, came an unexpected announcement on February 25, from the Directors General of Military Operations (DGMOs) of India and Pakistan. This announcement was made amidst continuing incidents of ceasefire violations across the LoC in J&K. India and Pakistan sought to address each other's concerns by agreeing to strictly observe the provisions of all agreements for a ceasefire. It would be reasonable to conclude that discreet ‘back-channel’ discussions had paved the way for this decision. Pakistan army chief General Bajwa went a step further on March 16. He averred that it is ‘time to bury the past and move forward’. Not surprisingly, his statement was hedged and accompanied by conditions like ‘India would have to create a conducive environment, particularly in Indian Occupied Kashmir’. This was predictably accompanied with the usual ‘blackmail mantra’ that both countries possess nuclear weapons.

While Imran Khan has been less than diplomatic in his references to India, General Bajwa has been more restrained. He is more nuanced and sophisticated in his references to India than his predecessor Gen Raheel Sharif. This is not a new feature. While General Musharraf was initially hawkish, he learnt his lessons from the fiasco he led the Pakistan army into, in Kargil. Cross-border terrorism ended in 2003, and a framework for resolving the issue of J&K was broadly agreed upon. Musharraf’s chosen successor, Gen Ashfaq Kayani, disowned everything Musharraf agreed to. Kayani was responsible for the 26/11 terrorist attack by the LeT on Mumbai. Musharraf himself was initially very different from his predecessor, Jehangir Karamat, a soft-spoken officer, careful about his rhetoric and decision making. There is no guarantee that Bajwa’s successor will carry forward what his predecessor has initiated. Bajwa, under extension, is scheduled to retire in November 2022. It is, therefore, logical to recognise that unless something untoward happens, we can be reasonably assured that a carefully crafted dialogue process, largely behind the scenes, can be crafted. The only fly in the ointment would be the tempestuous Imran Khan.

Pakistan will, hopefully, learn that India is not going to be guided by Islamabad’s demands on the dialogue process, or on J&K. The entire process of taking forward the constitutional changes in J&K will be determined by India, at a pace decided by its government and people. Relations with Pakistan will hopefully focus on the ‘Four Ts’ — trade, travel, transit and tourism. Talks on J&K are best left to a ‘back channel’.

India will have to carry forward its efforts to strengthen its strategic autonomy, even while moving ahead on Quad. It will continue to work on its ties with Russia, while strengthening its relations with Japan, France and the UK. Neighbours like Sri Lanka, Bangladesh, Bhutan, Nepal and Myanmar, are now clear about India’s strategic compulsions. There is, however, much still to be done to get friends in ASEAN to show greater unity in dealing with territorial challenges posed by China.