The new India is not scared of the govt

The Constituent Assembly was about as elite a body as could be. Its members were elected, with only a small, distinguished set of people, just 10 per cent of the total population of India, having the right to vote. These were people with property and/or government jobs. The rest of the population was too poor, too downtrodden, to assert itself. 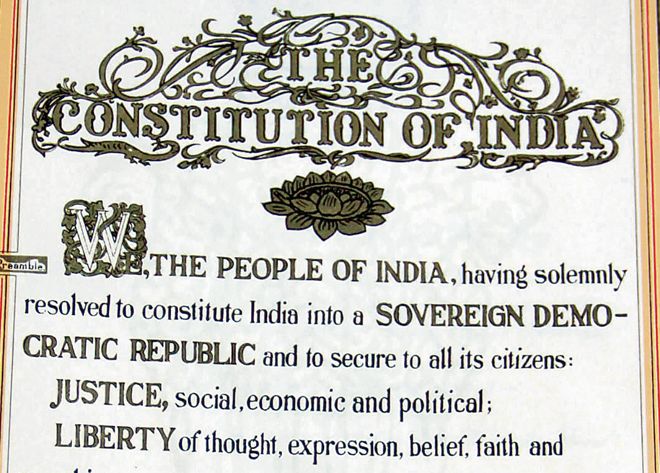 Words of wisdom: The Constituent Assembly scrapped communal representation which was announced by the colonial government in its Communal Award.

This is not the 'traditional' India of the 19th century in which Indians were a people bound to each other in bonds of mutual contempt. Those were a people whose loyalty was easily won over by the British East India Company merely by ensuring that there was a modicum of justice in the districts where it took control of governance. Indians of those times had little hesitation in working for the British to ruthlessly suppress anyone who questioned the British.

Gandhi, then working in South Africa, noticed the terror of the government among the Indians. People were so fearful of the government that when in 1911, a few young men threw a bomb at the Viceroy while he was going in a procession through Chandni Chowk in Delhi, the grandees of Delhi, fearing retaliation from the government, offered huge amounts of money to the Viceroy to underscore their continued loyalty to the British. It is another matter that an embarrassed Viceroy refused to accept the money and instead used it to create the Lady Hardinge Hospital and the Delhi Public Library, both of which continue to be of use to the public till today.

Our present-day India is almost entirely the creation of a set of leaders who noticed that the good governance which the British offered to Indians was at the cost of enslaving them, trashing their history and culture and, destroying the soul of the country. Indeed, during the first phase of being ruled by the British, Indians had so internalised the criticisms of India which the British made that they unquestioningly accepted the view that they were a horrible people, who ill-treated their women: kept them uneducated, threw them out when widowed and, forcibly burnt them to death in the name of sati. Indians, the British pointed out, practised the caste system, characterised by contemptible behaviour towards those of the lower castes, especially those who were powerless and poor.

An eager acceptance of the British judgment about Indians sparked off an entire movement of social and religious reform which is known as the Bengal Renaissance. A change in Indian stances became visible only in the 20th century, when Gandhi did not hesitate to dismiss such censuring of India as a ‘gutter inspector’s report’. He was responding to American journalist Katherine Mayo’s book, Mother India, in which she echoed many of the 19th- century accusations about Indians being horrible towards women.

Gandhi represented a different India. An India which noticed that while there were many things that were wrong with the way in which the Indian society functioned, it was also a caring society, one in which new ideas and people were always welcome, people took great care not to tread on each other's toes and, above all, there was always space for individuals to follow their own style of life and work without being forced to follow the diktats of society. So much so, that even young men (and sometimes women) had the freedom to take time off from normal life, take sanyas for a brief while and then return to a grihastha life after some time.

All public figures in colonial India were also sensitive to the fact of religion-based communal divisions in the country. The Report of Inquiry into the Riots at Kanpur, which the Indian National Congress produced in 1931, blamed the British for dividing Indians into warring Hindu and Muslim groups. It noticed the absence of communal conflicts in territories ruled by Indian princes. The Kanpur inquiry report rued the inability of the Congress to convince people to live peacefully rather than fight with each other for being Hindu or Muslim.

Earlier, the Nehru Report of 1928, authored by Motilal Nehru, had insisted that any future government in India had to ensure that religious divisions and distinctions were not made the basis of governance in the country. Yet, when the colonial government announced its Communal Award — the decision to have separate electoral constituencies for Muslims — the Congress hesitated in condemning it. The Akalis, under the leadership of Master Tara Singh, did.

It was in this context that the Constituent Assembly sat down in 1946 to create a Constitution for independent India. The Constituent Assembly was about as elite a body as could be. Its members were elected, with only a small, distinguished set of people, just 10 per cent of the total population of India, having the right to vote. These were people with property and/or government jobs. The rest of the population of India was too poor, too downtrodden, to assert itself. With a literacy rate of 10 per cent and a per capita income of less than Rs 500, the common people were completely beholden to these grandees for their existence.

Yet, the Constitution that they drafted ensured that every citizen was given a vote. Harijans and tribals, social groups that were considered extraordinarily powerless, were given reservations in proportion to their population. The individual was empowered through a slew of Fundamental Rights. Detailed rules were laid down to ensure that the three arms of the government — the judiciary, the legislative and the executive — were autonomous and could check and balance each other to provide a fair enough government. Above all, communal representation was scrapped.

Each of the parts of the Constitution evoked intense debate within the Constituent Assembly. Some of the more contentious issues, such as the use of a single language for governance and the Indian reverence for the cow, were put aside as part of an agenda for the future. English was accepted as the official language for 15 years and the major Indian languages were all accepted as national/official languages. The matter of the cow was made a part of the Directive Principles in the hope that at some later date, Indians might discover a better way of dealing with the emotive dilemma over worshipping the cow or eating it.

With a desire to spell out as much detail as possible and take into account as much of the diversity of India as possible, the Constitution inevitably emerged as a very lengthy document. Few except lawyers read it. Even political science students seldom went beyond the commentary written by DD Basu. Yet, the template that the Constitution provided has continued to transform India. Above all, it has created a people who are not scared of their government any more.