The overt Chinese message 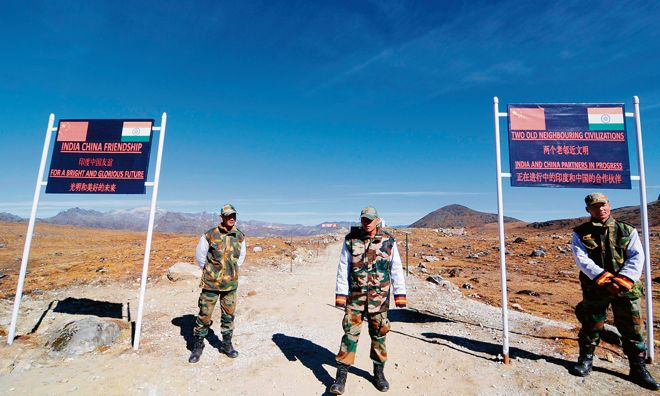 Edgy: There is a possibility that the recent events have another driver — the Covid tensions between the US and China.

How must one deconstruct the ongoing Sino-Indian face-off along the Line of Actual Control (LAC)? Are events in Naku La in Sikkim and Pangong Tso, Hot Springs, Galwan Valley in Ladakh connected? Or do they have independent drivers? As usual, the answers are not clear, though we should be clear that the actions are about signalling, not making war.

If the events are connected, they are being directed at the theatre level and may have a larger purpose. But if not, should they not be seen as a part of the normal summer-time patrol rush? This is now more frenetic because both sides have improved their infrastructure and mount more patrols in areas where there is a difference of perception with regard to the LAC.

There is one problem with this thesis. Galwan, Hot Springs and Naku La have not been on the list of the 16-odd places along the LAC where there have historically been differing perceptions of the LAC and consequent ‘transgressions’. These have been addressed by a range of agreements with standard operating procedures laid down to prevent any escalation of tensions. Reports now suggest that the tension in Pangong and Naku La has died down. But the Galwan situation remains a puzzle.

First, let us enter a caveat. China does not have an independent media but India does. And it is important to always question official accounts. Media personnel have no access to the areas we are talking about—Galwan, Hot Springs, north bank of Pangong. What we know is what we are being told by some agency—maybe the intelligence, the Army, or the ITBP. In the past, their approach has sometimes been mendacious and quirky.

In 2009, there were a spate of articles in the Indian media charging China with violating the LAC. In September, ‘official sources’ said Chinese forces had intruded 1.5 km into the Indian side of the LAC near Chumar, and sprayed the word ‘China’ in red paint on many rocks there. In June, two Chinese helicopters had violated the Indian air space near Chumar. A PTI report reportedly based on confidential defence documents said Chinese helicopters entered the Indian air space in Demchok area and the Trig heights in north Ladakh, and air-dropped canned food, which were past their ‘use by’ date.

As for Galwan, India has wrought a qualitative change in the area by completing the Durbuk-Shyok-Daulat Beg Oldi road in April 2019. This is also known as the Sub Sector North road and has strengthened India’s posture in this strategic area greatly. The current stand-off was apparently triggered by India trying to build a branch of this road up to its own side of the LAC in the Galwan Valley.

Alarmist reports saying the Chinese have actually intruded into the Indian side area are difficult to accept, since the LAC is just about 10 km from the road. In any case, the Chinese already dominate parts of the road from the heights on their side of the LAC.

Forces in Galwan are separated by at least 500 metres, though the PLA movements seem designed to block further construction of the Galwan Valley road. But they are not into fist fights, as in the Pangong area; or face to face, as in Doklam. Perhaps this is a result of jangled nerves in the local Chinese HQ which has long been used to dominating the area, or a longer term calculation relating to defending Tibet in relation to growing Indian capabilities in eastern Ladakh and northern Sikkim.

A large part of the problem arises from the shifting Chinese stand on just where the LAC lies in the western sector, where their claims have always been somewhat murky. The Chinese claim line of 1956, reaffirmed by Premier Zhou Enlai in 1959, showed both Chip Chap and Galwan rivers flowing into the Shyok, outside their claim. In 1960, they expanded their claim and occupied the Chip Chap and Galwan river valleys. A similar move led to the occupation of Siri Jap on the Pangong Tso. Indians set up posts to counter them, but these were not tenable and wiped out in the 1962 War, after which China occupied another 5,000 sq km along the LAC.

There is a possibility that all the events — in Sikkim, Pangong, Galwan — have another driver: Covid tensions between the US and China. Last week, somewhat uncharacteristically, its outgoing top diplomat for the region, Alice Wells, said the tensions were a reminder of the ‘threat’ posed by China. She added that whether it was the South China Sea of the border with India, ‘we continue to see provocations and disturbing behaviour by China’.

Hit by Covid, and the economic disruption, the Chinese are rattled by the increasingly hostile US. In the past couple of months, temperatures in the South China Sea have been rising; now, US actions, triggered by the approaching elections, have pumped anti-China rhetoric to a dangerously high level. So, Beijing could well be doing some signalling, warning New Delhi to stay away from whatever Washington has to offer. The actions across the LAC could well be a signal to suggest that India, too, has many immediate vulnerabilities and getting involved in any US-led venture could be counterproductive.