The time for India to play the Tibet card is now : The Tribune India

The time for India to play the Tibet card is now

India’s boundary dispute with China is intrinsically linked to Tibet. New Delhi’s recognition of Chinese sovereignty over Tibet was contingent upon China’s acceptance of Tibetan autonomy. The Dalai Lama gave up the quest for independence in exchange for genuine autonomy. Beijing has squashed autonomy and not kept its side of the bargain with Tibet and India. 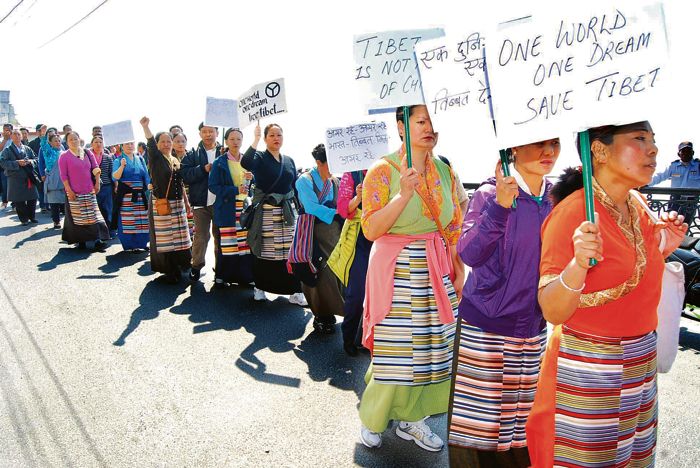 globalise the issue: China’s presence is unlawful in Tibet, which has become an occupied country. Tribune photo

India is in a strategic quandary: how to counter China’s periodic coercion on the undefined LAC, which Beijing refuses to delineate? In 2013 (Chumar), 2014 (Depsang) and 2017 (Doklam), the PLA was persuaded to pull back, but not in 2020 East Ladakh. India does not have any instrument to dissuade or deter China in Tibet due to the asymmetry in hard power and infrastructure without compromising its strategic autonomy or inviting a kinetic response. Neither of these options is India willing to undertake.

The Chinese have violated border agreements and brazenly blamed India for the “rights and wrongs” in East Ladakh. Foreign Minister S Jaishankar has said that the Chinese have given five reasons for amassing troops on the border, provoked clashes for the first time in 45 years and shredded the 1988 consensus built over time to maintain peace along the border.

In December 2020, the then US President Trump signed into law America’s Tibet Policy Support Act (TPSA), signifying Tibet’s geo-strategic importance, origin of great rivers, necessity of protecting the environment of the Tibet plateau and ensuring Tibetans enjoy genuine autonomy. The TPSA makes it a policy to ensure that the Dalai Lama’s succession is consistent with Tibetan Buddhism and is the prerogative of His Holiness. In the US, the succession issue is sacrosanct and codenamed Project 23T.

Similarly, the Chinese Communist Party holds dear two issues: its historical right to choose the 15th Dalai Lama; and concern over Tibetans in exile, particularly political and spiritual control over Tibet, including Chinese supervision over the monastery management committees. Previously, Tibetan youth joined monasteries when five years old. The Chinese have changed it to 18 years. The US State Department, in its annual country report on human rights in China and Tibet, for the first time, does not describe Tibet as an inalienable part of China. It is a significant departure as Beijing makes every country say that Tibet is a part of China.

On March 10, 2021, the 66th Tibet Uprising Day was commemorated in New York opposite the UN Headquarters, recalling that 6,000 monasteries had been destroyed and 156 Tibetans had self-immolated. Robert Destro, the sixth Tibet coordinator for the US State Department, noted that after nine rounds of talks with the Dalai Lama’s emissary, a proposal for genuine autonomy was given by China in writing.

In the Freedom House report (March 8, 2021), Tibet is described as the least free country after Syria and in Report Without Borders (2021), Tibet is categorised as more inaccessible than North Korea. On the Uprising Day, US House Speaker Nancy Pelosi said: “62 years ago, brave Tibetans rose up against Chinese invasion…; Beijing, for years has waged a campaign to destroy Tibetan culture…and lauded the new TPSA.”

China has built elaborate road, rail and habitation hubs with military infrastructure on the border with Nepal, Bhutan and India. Whole villages have been encroached across borders since 2017. On August 29, 2020, President Xi Jinping ordered that Tibet be built into an impregnable fortress, the new Great Wall, and facts be dug out that link Tibet to China for their impact on the boundary dispute with India.

India’s boundary dispute is intrinsically linked to Tibet. New Delhi’s recognition of Chinese sovereignty over Tibet was contingent upon China’s acceptance of Tibetan autonomy. The Dalai Lama gave up the quest for independence in exchange for genuine autonomy.

Beijing has squashed autonomy and not kept its side of the bargain with Tibet and India. In 1965, Prime Minister Lal Bahadur Shastri had informed the Tibet Government in Exile (TGE) that he would recognise it, but he died prematurely. But the original sin was committed by India’s failure to prevent the annexation of Tibet, India’s vital area. Lt-Gen Francis Tuker, GoC-in-C, Eastern Command, wrote in 1946-47 that China, not Russia, was the main threat and Tibet be protected.

India should inform China that in the light of the recent events on the border, especially in East Ladakh, and New Delhi’s rethink of its Tibet policy, fresh facts had emerged: Sovereignty claim over Tibet had been fudged, as Tibet was taken by force and, therefore, sovereignty was inherited. Tibet was never a part of the imperial China or of the Mongol empire. Illegal occupation of Tibet through invasion, misrepresentation of facts and altering the historical narrative did not provide legitimacy. The Indo-Tibet border was ratified in 1914 by the McMahon Line and ratified by Tibet. The Dalai Lama had traded suzerainty (not sovereignty) for autonomy.

This first step in reopening the Tibet issue will attract stiff Chinese reaction. After Trump signed the TPSA, the Chinese Embassy in New Delhi outlined Beijing’s position, saying that the Indian media supporting US legislation was advocating Indian interference in China’s Tibet affairs. It warned the media to take an objective issue on China’s sovereignty and territorial integrity and not play the Tibet card to meddle in China’s internal affairs.

But, India has to internationalise the issue of Tibetan freedom in concert with other democracies. The US Congress and the EU Parliament are believed to have recognised Tibet as an occupied country.

In his Freedom Brief 2020, Michael Van Walt, legal adviser to the Central Tibet Administration, has noted that China’s presence is unlawful in Tibet, which has become an occupied country. As China does not possess sovereignty over it, government policy must be corrected as per the international law. India must enlarge the bilateral canvas of the border dispute to include Tibet and consider leading on Tibetan autonomy at the global fora. The time to bell the cat is now, when pique against China is at its peak.