The unfair arrest of Fr. Stan

If NIA has evidence that the priest dabbled in violent activities, it must prove allegation 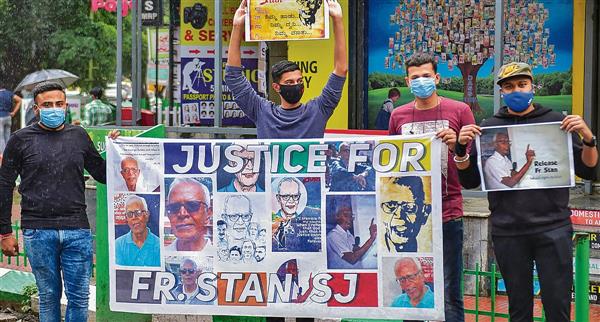 In service: Fr. Stan has stood up for Adivasis’ rights. To deprive the defenceless Adivasis of a protector is to rub salt into festering wounds.

As a product of Jesuit education, I have a soft corner for Jesuit priests. The arrest of Fr. Stan Swami, a Jesuit born in Tamil Nadu, who opted to live and serve in the Ranchi province, tending to the needs of the Adivasis of the area, has unnerved me. I cannot imagine this 83-year-old being a menace or danger to my country — and his. I would not be surprised if he harboured latent sympathies for Maoists, though he admits that violence does not solve problems. Like terrorists, insurgents, too, have never succeeded in their aim of overthrowing governments. But the injustices they have been fighting rankle even with those who, like me, in my earlier profession, could have been despatched to oppose them.

So, if he fought those injustices in a Christian or a Gandhian manner, it should not surprise anyone. The Society of Jesus, whose soldiers are priests known as Jesuits, was founded by Ignatius of Loyala, a Basque nobleman, in the days when the Catholic Church was being besieged by Christian reformists in Germany and other countries of Europe. The Jesuits were in the forefront of the then Pope’s counter-reformation movement. The guiding principle of the Jesuit order was ‘Service through an active life in the world’ as differentiated from the various Orders of Monks who spent their lives in seclusion and in prayer.

In recent times, there have been instances of priests, even an Archbishop, Helder Camara in South America, who have taken the concept of service to heights that have alarmed the church authorities themselves! These adherents of the ‘liberation theology’ have been moved by injustices heaped on the poor by elected governments, who protect the economic exploitation inherent in many socio-political systems. Archbishop Camara was hounded by the Brazilian administration just like Fr. Stan is being targeted in India.

Fr. Stan stood up for the rights of the Adivasis to the usufruct of the forests in which they lived. Corporate houses have been expropriating these lands with the help of governments. The priest’s own superiors would have stopped him if he had crossed the ‘Laxman rekha’ of peaceful opposition. It is with this knowledge that I say with confidence that he could never even have dreamt of waging war against the State.

To say that he was complicit in the Bhima-Koregaon case is even more ludicrous! How and why would the old priest get involved in a quarrel between Dalits and Marathas in Maharashtra? He says he has never been to Bhima-Koregaon and I believe him. The East India Company’s army got the better of the Maratha army led by the Peshwa some 200 years ago at the battle of Bhima-Koregaon. One component of the East India Company’s troops was a Mahar company. Since the past few years, the date of the battle is being celebrated by the Dalits as a victory over their age-old village rivals, the dominant Marathas! Matters came to a boil in 2016, because the second centennial of the battle was being celebrated on a bigger scale, and an RSS pracharak, known in the area as Bhide Guruji, was moving around the area on a cycle spreading counter-propaganda. There was a BJP government in Mumbai. It came down on the organisers of a meeting held a day or two earlier, to the date of the commemoration, and clamped offences of sedition, causing enmity between classes and such crimes on a dozen leftist intellectuals from around the country.

Fr. Stan’s name was bandied around for a while. Nothing was heard about him for a few years till suddenly he was called for questioning about a message discovered on his computer that linked him with Maoists. The NIA has been labouring to gather evidence against left-oriented activists for the past over four years. Arrests have been made at different intervals of time, prolonging the incarceration of more than a dozen leftist intellectuals, dubbed ‘urban Naxals’ by pro-government supporters.

I am not privy to the evidence the police and the NIA have collected against the priest and other ‘urban Naxals’. I only know that the allegation at first was that they were conspiring to assassinate our PM. This canard (it obviously is far-fetched) has not been mentioned except at the inception of the investigations. The charge now is conspiring with the underground Maoists to overthrow the State by force of arms.

From snippets leaked to newspapers and from official demands for custodial interrogation when submissions have to be made in open court, the evidence seems to be limited to correspondences gleaned from computers belonging to the accused. There was no recovery of weapons or letters from the priest in person. Neither does he have any record of criminal wrong-doing during his stay in Adivasi lands or elsewhere.

Many people of Jharkhand, including its CM have come out openly in his favour. Obviously he has endeared himself to ordinary folk because of his selfless work and the good he has achieved in the shape of fair play and justice to them. The Adivasis are by nature and upbringing simple folk who rely on the more worldly people of the plains to give them what is their due.

Because the plains people have not been fair, but have taken advantage of the simplicity of the indigenous people, the accumulated injustices have come to a head in the territory known now as the Maoist corridor, which stretches from beyond our borders with Nepal to Andhra Pradesh.

The left-leaning activists who have taken up the cause of the down-trodden are the ones who have been classified as ‘urban Naxals’. They have a grouse on behalf of those who have suffered injustices. The answer lies in addressing these injustices. But those who have fought for the rights of the Adivasis without resorting to violence should not be humbled in this way. If, however, the NIA has evidence to prove that the priest has dabbled in violent activities, let it prove the allegation.

But to deprive the defenceless Adivasis of a protector whose only mission is to afford them succour is to rub salt into festering wounds, thus assuring further injustices and perpetuation of an insurgency that a former PM, Manmohan Singh, has called the biggest challenge facing the security forces of the nation.