The US presidential elections saw the peddling of Hunter Biden’s business deals with China (besides Ukraine) by the pro-Trump media. The Biden team dismissed most of it as ‘Russian disinformation’, but it is incontrovertible that Hunter flew with his then Vice President father to Beijing in 2013. While there, he also shared a cup of coffee with an investment banker and was on his company’s board 12 days later. 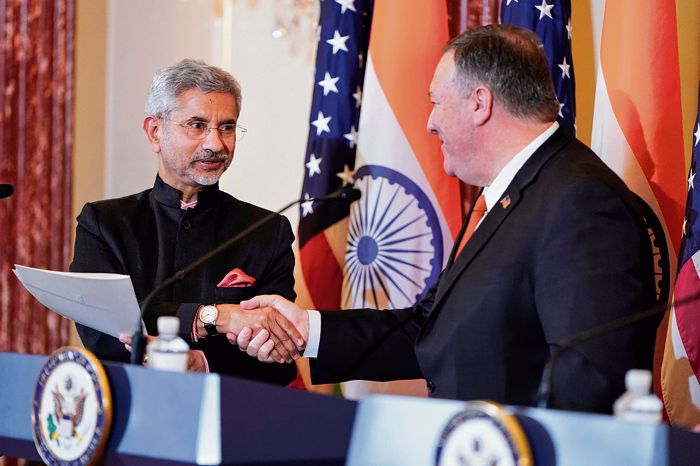 No clear focus: India is worried about US foreign policy in a post-Trump era with the new administration declaring that Quad will never become an Asian NATO. Reuters

External Affairs Minister S Jaishankar may have been expressing the anxiety being felt by the South Block over the zigzag course taken in foreign policy by the Biden administration when, in a span of one week, he twice declared that the Quad will never become an Asian NATO.

It now emerges that when the first-ever Quad summit convened by US President Joe Biden on March 12 was waxing eloquent on the launch of a “landmark partnership” with India to further accelerate the end of the Covid pandemic, the White House was doing the exact opposite.

A fact sheet after the Quad summit spoke of undertaking “shared action necessary to expand safe and effective Covid vaccine manufacturing in 2021”. But the on-ground situation in Washington was vastly different. Indian Ambassador to the US

Taranjit Singh Sandhu was at the same time telling the Biden administration that its invoking of the Defence Production Act has affected vaccine production in India due to a shortage of cell culture media,

The end-game of enticing India into a Quad grouping with military teeth had already been jolted when the US Navy’s USS John Paul Jones sailed unannounced into the Indian exclusive economic zone (EEZ) on April 7. The “freedom of navigation” sail could have been brushed under the carpet like the US Navy’s many such earlier forays.

But for those who might have missed out on this brief India-US scrimmage-that-wasn’t, the US Seventh Fleet helpfully put out a press release that declared its warship sailed “inside India’s EEZ, without requesting India’s prior consent”.

The US Navy did clarify that its Freedom of Navigation Operations (FONOPs) “are not about one country, nor are they about making political statements.” But if the US

professes to place India in the

top drawer of its allies, why was there no prior word to the Indian Navy or its liaison officers posted in several of the US Navy’s Asian outposts? Otherwise, the Indian Navy would not have reacted with a counter-press release that stated the US warship was tracked as soon as it entered the EEZ, about 130 nautical miles west of the Lakshadweep Islands.

On March 18 and 19, in stark contrast to its public image of going for an all-out war against Beijing in supply chains, defence build-up and high technology, Biden’s two top foreign policy czars, Tony Blinken and Jake Sullivan were closeted with their Chinese counterparts for two days in Alaska.

The opening lived up to the public billing of an extremely upset US trying to pressure China on all its vulnerabilities — Hong Kong, Xinjiang, Tibet, South China Sea et al. In fact, it was an unprecedented diplomatic dust-up. But the opening exchange did not appear to materially affect the rest of the meeting. “A senior administration official told me that the moment the cameras left, the Chinese side went back to business as usual, working through the list of issues on the agenda, including non-proliferation and Iran,” said an Atlantic article.

As is well known, China already has a substantial handle on the US economy which has kept its

citizens satiated with debt. The fiscal dependence — the US owes over $1 trillion to China — can shake the economy if it is suddenly dumped. The trend to lean on China had spiralled during the Obama years when Biden was his second-in-command.

The US presidential elections, during which candidates are closely scanned for character flaws, saw the peddling of Hunter Biden’s business deals with China (besides Ukraine) by the pro-Trump media. The Biden team dismissed most of it as “Russian disinformation” but it is incontrovertible that Hunter flew with his then Vice President father to Beijing in 2013. While there, he also shared a cup of coffee with an investment banker and was on his company’s board 12 days later.

There is no evidence that the US foreign policy was influenced by the deal, but the charges cut to the bone. Joe Biden had to promise during the Presidential stumping that no one in his family will hold a job with a foreign corporation or government.

This incident, however, leads to the assumption that the US under Biden might not be thinking of a zero-sum game against China, as is being fondly imagined in many quarters in India. The vaccine dust-up apart, the Quad merely renewed the long-pending promise of meeting acute Indian strategic interest in critical and emerging technology by setting up a working group. This leads to the apprehension whether the current contradictions between the US and China have a temporary character? The Donald Trump-Mike Pompeo duo, which put the Quad in high gear, in contrast had an existentialist fear of China putting an end to the American exceptionalism that has ruled the world after World War II.

There is certainly a vacuum as multilateralism has fallen short. This has led the trend to move towards groups of countries that can work together. But Biden’s national security policies premised on a “growing rivalry with China” are grating with the on-ground situation. This may have led Jaishankar to issue two clarifications within a week about India seeing no dividend in forming a military block with the Quad in the Indo-Pacific.

UP elections: Adityanath's cabinet to be expanded