The untold brutality on Jagmail Singh

The 37-year-old father of three was barbarically beaten up, ‘made to drink urine’, left to die in a Sangrur village. Family members, residents recall events leading to the killing of the Dalit daily-wager who dared to seek his dues 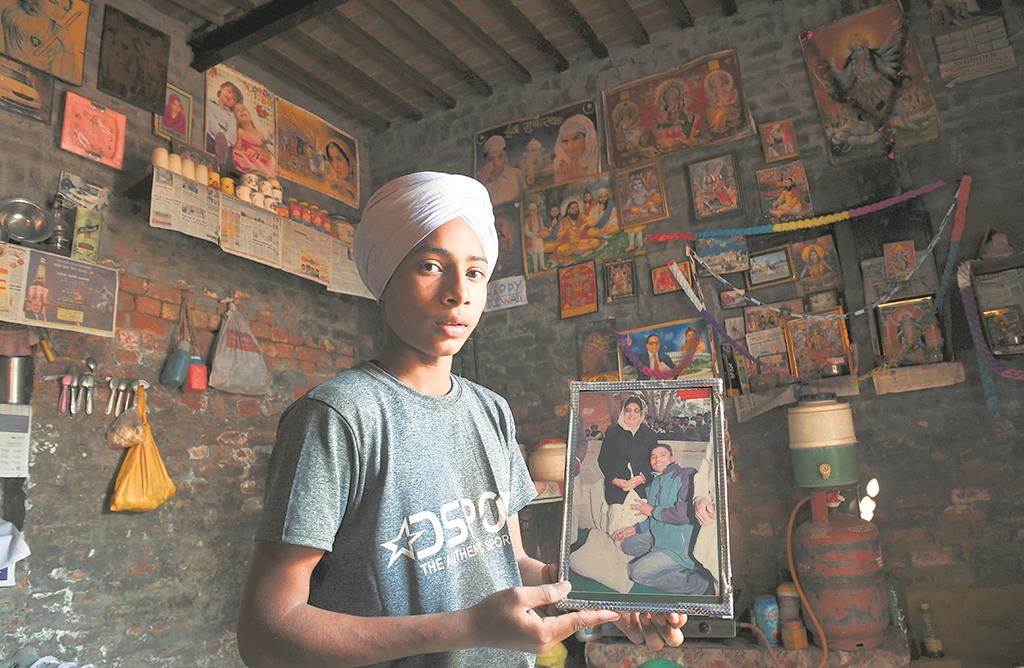 Jagmail singh was fond of portraits. Hardly any space on the wall of his one-room house is blank. Besides portraits of his family, Hindu gods and Sikh Gurus, the walls adorn those of Maharishi Valmiki and Ambedkar. “He would get a new photo every day,” says his son Karanvir Singh, a student of class IX.

An eloquently framed photograph is that of Jagmail Singh sitting at the feet of former Chief Minister Rajinder Kaur Bhattal, his hands folded. His brother Gurtej Singh says that from a car to truck-trailers, Jagmail could drive every vehicle with ease and worked as a driver with Bhattal’s son Rahul Sidhu for several years. “This photograph is from those days.”

Son of a known shoemaker in Lehra area, Jagga, as the residents of Changaliwala fondly called Jagmail, was a primary school dropout. He started working as a milkman at a young age and then learnt driving.

His nephew Gurdeep Singh, who works with the Zameen Prapti Sangharsh Committee, says that, four years back, he started behaving strangely. “He would be fine the entire year but would change with the onset of winter. Sometimes he would start sweeping the streets, at times he would keep knocking at the neighbours’ door all night.”

“The story in the village goes that someone had performed black magic. We feel he had developed some mental illness, which was seasonal,” he says. “Jagge di maut te mele lagan ge, mele. Dekhyo tussi, police de DSP aaunge,” he would roam in the village, repeating this line till his last days, says Sukhchain, a retired Army man, who now runs a shop in the village.

Since illness took over, Jagmail ceased to have a permanent job. He would try to find work in the village or whoever required a driver would call him. Some days back, in lieu of work done for Laadi, a villager, Jagmail sought wages of Rs 200, to which Laadi said his friend Rinku will pay, claims Sukhchain.

On Diwali night, Jagmail went to Rinku’s house and started knocking at his door. His son Karanvir says Rinku and Laadi were bursting crackers at the rooftop and yelled at Jagmail. “They told him to get lost, said there were people sleeping inside. So, I brought him home. But after some time, Rinku  came to our house along with another man and started beating him up. Rinku bit Jagmail’s thumb badly. Next morning, Rinku accompanied by Binder Singh came again but couldn’t find my father as he had gone to the police station to file a complaint,” recalls the teenager.

Sukhchain says that on November 6, the police facilitated a compromise that the three will have to pay Rs 4,000 to Jagmail for the injuries. “But they refused that too. Looking for them once again, Jagmail reached their fields and asked for the money. When they refused, he lied down in front of a moving tractor.”

As per the FIR, Rinku accompanied by two other accused — Binder Singh (alias Bita) and Lakhvir Singh (alias Lakhi) — came back to the village and asked Jagmail to come along on the pretext of getting him medicine, but took him instead to his house. Amarjit, Rinku’s father, was already waiting for him. Jagmail was tied to a pillar and Rinku and Binder Singh started hitting his legs with iron roads and Amarjit used his crutch.

Villagers allege that the same crutch capped with iron has been used on several other Dalits in the past. “All of us went there together with requests that he had been beaten up enough and should be forgiven,” says Jagsir Singh, a daily-wager from the village. “But Amarjit pointed at a pair of scissors and nose pliers and threatened to chop off the tongue with which he hurled abuses and pull out his nails too. Amid all the chaos, I quietly hid both the things,” adds Jagsir.

Scared, they came back. After two hours, panchayat member Pala Singh called another Dalit youth, Jagga Singh, and told him that Jagmail was lying in front of the gurdwara close to Amarjit’s house. Jagsir says he and Jagga tried to wake him up, but he didn’t respond. According to Jagga Singh, Rinku, who was standing nearby, said, “Eh drama karda, drama. Ehnu do daanga hor vajiyaan taan saare pind de uppar di gera dau (He is pretending to be unconscious. Kick him more and he will go running across the village).”

‘They reduced me to this, I didn’t cry. Now I will’

Jagmail was brought home on a bike and kept lying there for two days. On November 9, he reached the Lehra Civil Hospital for treatment but was sent home. By then, gangrene had set in. It was three days later, on November 10, that the police reached his home to record his statement. He told the policemen that he was not only tortured but was forced to drink urine when he asked for water.

An ambulance took him to hospital. “Puss was dripping from his legs when we picked him up,” says Jagsir. “We were told his condition was serious, so we collected around Rs 10,000 from Dalits,” adds Sukhchain Singh.

However, the police still hadn’t registered a case. That was done only on November 13, three days after recording the statements, when it was clear that Jagmail may not survive and the Left organisations had already opened a front against the government.

Jagmail’s nephew says that at Patiala’s Rajindra Hospital, he was semi-conscious and would say, “Look, Rinku has come. They have beaten me.” Later his legs were amputated and, on November 16, he died at PGI, Chandigarh.

Before we leave, Karanvir points at a poster of Ambedkar with a garland. A column to its right narrates Ambedkar’s fight against caste discrimination and the story of his drafting of the Constitution, within which is enshrined Article 15. Karanvir says it was his father’s favourite poster.

·         All the four accused in Jagmail Singh murder case have been arrested. As part of the agreement, the Punjab Government said the police would present a challan within a week (now expected on Monday) and ensure that the trial is concluded within three months.

·         Besides Rs 20 lakh compensation, Rs 1.25 lakh for repair of Jagmail’s house and funding his children’s study, the government has also agreed to give a Group-D government job to Jagmail’s wife after relaxing qualification criteria.

HOW IT ALL UNFOLDED

Nov 10: Police record statement, he is taken to Sangrur hospital

Nov 16: He dies at PGI, Chandigarh