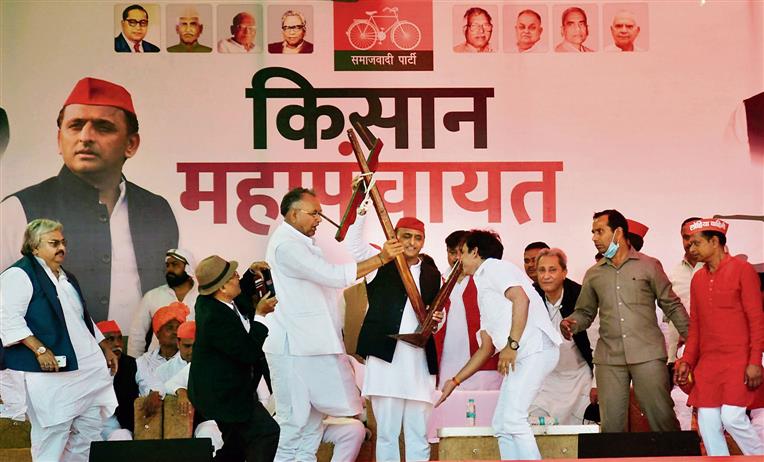 Tall Order: The Opposition is in for the long haul before a party or an alliance can hope to catch up with the BJP. PTI 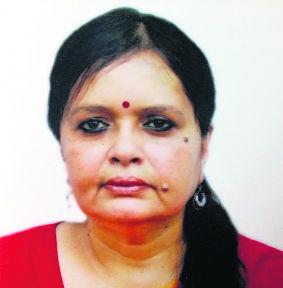 After the elation comes despair. Feet on the ground, the Opposition in Uttar Pradesh has had to contend with the harsh realities of what the horsepower of resources, muscle, manipulation, coercion and the alleged misuse of official power meant. The Samajwadi Party (SP)-Rashtriya Lok Dal (RLD) duo emerged trumps in the first phase of polling for the panchayat elections in April that entailed direct voting to elect village-level representatives. Voters showed a distinct preference for the SP-RLD that came first, followed by the BJP and the BSP, with the Congress and others trailing for the remaining positions.

The storyline changed when it was time to elect the block ‘pramukhs’ (second-tier heads) and the zila panchayat ‘adhyaksha’ or district panchayat presidents, constituting the third and topmost tier in a three-level hierarchy. These heads were elected by the village-level panchayat representatives in indirect elections that generally unsettled the level playing field by increasing the scope of manipulation using money and muscle. A ruling party is historically advantageously placed to win the second and third level of the elections, which are not officially fought on party symbols. However, because it is generally known which candidate is endorsed by which party, political trends can be extrapolated. Logically, the BJP should have lost because the electoral college was made up of SP-RLD-backed winners. Quite the contrary happened. As allegations of intimidation, violence, assault and firing from the Opposition flew thick and fast, the BJP officially netted a majority of the block (67 out of 75 seats) and zila panchayat (635 out of 825 seats) president posts, thereby reinforcing its grip over the rural bodies that should prospectively help in the Assembly polls next year.

The SP-RLD, which is emerging as the principal opposition, gradually got its act together, despite the BJP’s onslaught. SP president Akhilesh Yadav has now focused his attention on the Muslims, although earlier he seemed keen to live down the pro-minority tag fastened on his party in a Hindutva-dominated polity. His first public interactions were with the mango growers of Malihabad near Lucknow and the weavers, principally Muslims, at the SP’s office in the state capital. From balking at attacking the BJP and the CM, Yogi Adityanath, the SP stepped up the offensive against both through its slogans ‘chunavi chori’ (mandate robbed), ‘chanda chori’ (Ram temple donations stolen) and Corona ‘badintezami’ (Covid mismanagement) to flagging issues of the alleged victimisation of farmers and women, inflation and unemployment.

Given its dexterity and ingenuity for turning adversity to advantage, often by debatable means—as the panchayat polls demonstrated—UP’s Opposition is in for the long haul before a party or an alliance can hope to catch up with the BJP. The population policy that in normal circumstances would seem well-intentioned has become another dare to the minorities because the BJP’s constant refrain is that the policy will not hurt any religious community. Why is the point being laboured? Some of its leaders harked back to the Emergency and endorsed Sanjay Gandhi’s slogan ‘Hum do, hamare do’, which preceded a mass sterilisation programme that targeted Muslims to such an extent that they deserted the Congress in the 1977 elections. Every step taken by Adityanath is to bolster his primary agenda of communally splitting the polity.

The BSP that arose from an over four-year-long slumber last week, declared its plan to win over the Brahmins, a community that is upset with Adityanath for various reasons. BSP president Mayawati succeeded in winning over the Brahmins in the 2007 state elections through her general secretary, Satish Chandra Mishra, a ‘savarna’ from Kanpur, who is well-networked with the community. Of the 51 Brahmin candidates Mayawati fielded in 2007, 20 won, but by 2017, the community’s support to the BSP declined to a degree where only four of its 52 Brahmin nominees were elected. By then, the community was wedded again to the BJP. Her pro-Brahmin tactic seems like bottling old wine in an old bottle unless she comes up with a credible message that’s also powerful enough to sway the community away from the BJP.

In UP’s complex social pastiche, Mayawati’s ability to wean over the Brahmins will depend on her capability to keep her core Dalit votes together. Quite many Dalit sub-castes tilted towards the BJP since 2014. Besides, Chandrashekhar Azad Ravan, the young lawyer-cum-activist from Saharanpur is making a play for Dalit votes under the Azad Samaj Party’s banner. Careful not to assail the BSP—perhaps a sign of continuing Dalit support for Mayawati—Azad, several years younger to her, raised the issues of conducting a caste census and legislating reservation in promotions which the BSP harped upon for years.

Congress general secretary Priyanka Gandhi Vadra recently dropped in on UP for three days after a long gap, which belied her earlier declared objective to invest more time in the state. The only significant takeaways from her visit were that she seemed open to an alliance with the ‘smaller’ entities, but not at the cost of offending the Congress’s ‘cadre’. If the Congress indeed had a cadre, like the BJP or even the SP and BSP, wouldn’t it remain in the game instead of being outplayed each time since 1989?

The BJP keeps the first-mover advantage with the get-up-and-go instincts displayed by the CM, who was justifiably attacked for letting go of the management of the second pandemic surge and leaving people to their fate. The optics, conjured in the pandemic sequel through the exaggerated claims of the panchayat election ‘victory’ and of ‘vanquishing’ the virus, may not be enough of a countervail to offset people’s anger and anguish. Can the Opposition channelise the feelings on the ground into a movement against the BJP and Adityanath?