India must persist in its attempt to experiment with policy changes 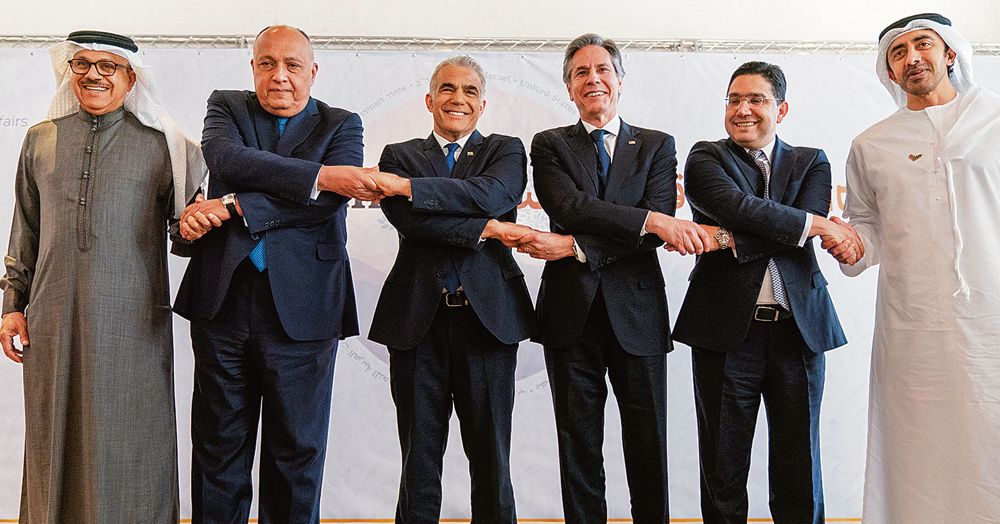 Link up: India can’t compete with the US or offer a parallel agenda. It must redouble efforts if it considers the Gulf as its extended neighbourhood. Reuters

India must not miss the bus again. The US is putting in place a coherent strategy for West Asia after the bumbling twists of the four Donald Trump years and another year of shifting policy under President Joe Biden. India is not in the American scheme of things for the region and unless New Delhi pulls itself up by its bootstraps, its recent gains in the Arab world and Israel will gradually evaporate.

India is not in the US scheme of things for the region and unless New Delhi pulls itself up by its bootstraps, its recent gains in the Arab world and Israel will gradually evaporate.

When US diplomat Yael Lampert sat down on June 27 with Sheikh Abdulla bin Ahmed Al Khalifa, Undersecretary for Political Affairs at the Bahrain foreign ministry, Alon Ushpiz, Israel foreign ministry’s Director-General, and senior diplomats from three other Arab governments, they took the first concrete steps to capitalise on ‘normalisation agreements’ between Arab states and Israel. The Biden administration despises the term ‘Abraham Accords’ because the nomenclature was given by Trump’s son-in-law Jared Kushner to the outcome of negotiations to normalise ties between Israel and the UAE and Bahrain in the twilight months of the Trump presidency. The Arab countries represented at the June 27 meeting have all normalised relations with Israel, but all the Arab countries which have established ties with Tel Aviv were not present.

The first Negev Forum Steering Committee meeting in Manama, capital of Bahrain, was a follow up to the Negev Summit hosted in March by Yair Lapid, now the PM of Israel. The summit was replete with symbolism because it was held at Kibbutz Sde Boker, the retirement home of Israel’s first PM, David Ben-Gurion. With the spirit of the man present, who signed the Jewish state’s Declaration of Independence, the summit denoted the ultimate emblematic acceptance of Israel by major countries of the region.

India is already in a similar, but smaller plurilateral arrangement with the curious name of ‘I2U2’. Indians prefer to call it the Western Quad to be able to relate to the other Quad in the Indo-Pacific made up of India, Japan, Australia and the US. The Western Quad was an imaginative innovation, and it will not disappear. But when three of its four members — except in India — are in another arrangement with more potential and prospects, namely the Negev Forum, no astrologers are needed to forecast the outcome.

It is not unrealistic that India can salvage what it has embarked on in West Asia. It can even build on it, but that requires careful policy planning, taking into account the region’s complex history. Coinciding with the Negev Forum Steering Committee meeting, India’s Defence Secretary met Saudi Arabia’s Deputy Minister of Defence, and discussed enhancing their defence cooperation. A meeting of the India-Saudi Arabia Joint Committee on Defence Cooperation was also held in New Delhi. Meanwhile, Indian Navy ship, Kochi, participated in an exercise with two ships of the Egyptian navy. Simultaneously, IAF and its UAE counterpart took steps to increase their interoperability through mid-air refuelling of a formation of IAF Sukhoi Su-30MKI fighter jets which were on their way to Cairo for a tactical leadership programme at an Egyptian Air Force Weapons School.

Taken separately, these may be minor events. But a collective picture emerges from them, which denotes significant changes in the West Asian strategic landscape. If Arab countries are turning to India for defence cooperation, it is because they are no longer sure about Washington’s commitment to their security interests, which have been taken for granted for decades by governments in the region. It is not only to India that they are looking as an alternative: China figured as a choice in recent years, but successive US administrations have pressured Arab governments to jettison major military collaborations with Beijing with results desired in Washington.

However, the US remains the first choice for many Arab governments as a defence partner. As for Israel, US Secretary of State Antony Blinken’s statement on Lapid’s assumption of prime-ministerial office three days ago left no ambiguity about America’s commitment to the Jewish state. ‘Israel has no better friend than the US and our commitment to Israel’s security remains iron-clad.’ The steady undercurrent at the Steering Committee meeting was that the US must treat the Middle East as a strategic priority. The underlying message for New Delhi is that it must redouble its efforts to secure its place in the region if it considers the Gulf as its extended neighbourhood.

The Negev Forum will have working groups, each dealing with health, food and water security, clean energy, education and coexistence, regional security and tourism. India’s challenge is that almost all these subjects are also the focus of the Western Quad. India cannot compete with the US in West Asia or offer a parallel agenda for the region: America’s resources are unmatched, its appeal in Israel and in the Arab world is immense, notwithstanding convictions on the Arab street that Tel Aviv is Washington’s unwavering choice in the area, which the US State Department calls the Near East.

That is why Blinken said at Sde Boker that the Negev Summit will work ‘toward our goal of Palestinians and Israelis enjoying equal measures of freedom, security, opportunity, and dignity, and create the conditions for a negotiated two-state solution.’ The ideas of Trump and Kushner on the Near East were given a formal burial during the creation of the new forum.

India missed the bus when ASEAN was created. Subsequent historical evidence has revealed that India could have joined ASEAN, but it chose not to. New Delhi had no clue that its members would become Asian Tigers. India missed the bus when the Asia-Pacific Economic Co-operation (APEC) of 21 countries in the Pacific Rim was created 22 years after the founding of ASEAN. History was repeated in West Asia, where India’s vision was flawed throughout because it put other peoples’ interests over its own.

It took PM Narasimha Rao’s experience in foreign affairs to dump India’s historical West Asian baggage to make a change. But those changes languished after he left office. The Modi government is attempting a new experiment in policy changes in the region. It must persevere in this effort.