There’s many a slip yet

Credibility eroded as US withdrawal from Afghanistan commences 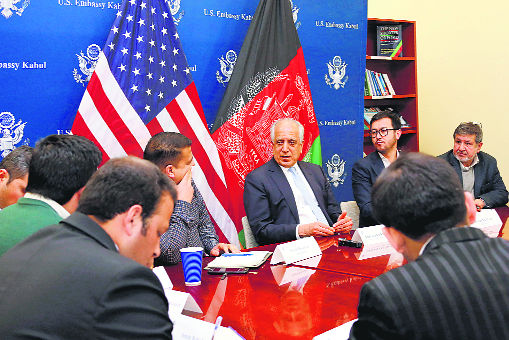 Us special envoy Zalmay Khalilzad and Taliban leader Mullah Abdul Ghani Baradar, one of the founders of the Afghan Taliban, set the stage for US withdrawal from Afghanistan on February 29 by signing ‘Agreement for Bringing Peace to Afghanistan’ in Doha. The agreement was signed with much fanfare, in the presence of representatives of US allies. Others present included representatives of India, Iran, Pakistan, Afghanistan’s Central Asian neighbours and Saudi Arabia and Turkey.

The agreement reflects yet another failure of US military intervention in foreign lands, similar to what transpired in Vietnam. The conflict in Afghanistan was triggered by terror attacks on New York and Washington DC on September 11, 2001. Al-Qaeda leader Osama bin Laden, who was the honoured guest of Taliban leader Mullah Omar in Afghanistan, was the mastermind of the attacks. The retaliatory US attack on Afghanistan has cost around $2 trillion, including $140 billion for training and equipping Afghan armed forces and on economic assistance. Over 1.11 lakh Afghan soldiers, civilians and Taliban fighters have been killed in the conflict. President Trump believes that his chances of re-election will be enhanced by withdrawal from a seemingly endless conflict.

The agreement proclaims that the US will reduce its forces to 8,600 in the first 135 days and complete withdrawal of its remaining forces within the next nine and a half months. US allies in Afghanistan, mostly from NATO countries, will follow suit. This, in effect, means that the US will withdraw all its forces by April 2021. Trump was earlier keen to get all forces out before the presidential elections. He has been compelled by internal pressures to postpone the date for full withdrawal. The agreement, which was literally thrust down the throat of the Afghan Government, has faced challenges. The Afghan Government refuses to abide by the schedule to hand over captured Taliban fighters. The primary emphasis of the US is to ensure a quick and safe withdrawal.

The government, headed by President Ashraf Ghani, faces serious internal challenges from his former ‘chief executive’ Abdullah Abdullah. The political situation is murky, as the presidential elections which pitted Ghani against Abdullah were marked by irregularities, leading to questions about the legitimacy of Ghani’s narrow victory. The first deputy chairman of Afghanistan’s Senate, Mohammad Alam Ezdyar, recently noted that the political and security crisis during and following the separate swearing-in ceremonies of Ghani and Abdullah had put Afghanistan on the edge of the precipice, ‘amidst foreign intervention, corruption and poverty, emanating from this political instability’. The Senate has urged Ghani and Abdullah to sort out their differences. In the meantime, the Taliban refuses to accord legitimacy to the Kabul government.

Pakistan is determined to enforce its writ in Afghanistan by assistance to its proteges in Taliban’s Haqqani network that operates from Pakistani soil. The network will seek to take control of large tracts of territory in southern Afghanistan. Moreover, JeM leader Maulana Masood Azhar, who masterminded the attack on India’s Parliament in 2001 and the Pulwama massacre, has now ‘disappeared’ from his home at Bahawalpur. Azhar has close links with the Taliban leadership. A recent edition of the JeM publication, Medina, Medina, averred that the US-Taliban agreement was ‘victory’ of the Taliban jihad against the US. As fellow ‘Deobandis’, the Jaish will remain closely allied to the Taliban for promoting radicalism and terrorism in India. The regional and international situation is also taking an interesting turn, amidst this political chaos. While Iran has historically been anti-Taliban, it has changed tune now and interacts regularly with the Taliban. There appears to be an understanding that the Taliban will no longer persecute Afghanistan’s Shia Hazaras.

US special envoys to Afghanistan and Russia — Khalilzad and Zamir Kabulov — met in Doha, when the agreement was signed. Reports suggest that there was a meeting of minds that Russia would cooperate with the US to deal with the emerging challenges in Afghanistan. Russia retains a crucial security role in its former republics bordering Afghanistan, like Tajikistan, Turkmenistan and Uzbekistan, which have concerns over Taliban links with Islamic extremists in the region. Russia faced internal threats from armed Chechens, supported by the Taliban. China, however, will be largely influenced by Pakistan in its approach to developments in Afghanistan. China maintained economic ties with the Taliban leadership, even before the Taliban was ousted in 2001.

India has been prudent and restrained in commenting on the recent developments in Afghanistan. It would only be appropriate for India to continue its economic assistance, if it is assured of the safety and security of its citizens in Afghanistan. It should join others in ensuring that differences between Ghani and Abdullah are resolved and a united front presented to deal with the Taliban. Violence in Afghanistan will inevitably continue, as the Taliban will almost certainly seek to control more territory in Afghanistan. Should the need arise, India could, at a later date, consider boosting the strength of the Afghan armed forces — after close consultations with the Afghan, US and Russian governments. Developments in Afghanistan are inevitably going to require continuing high-level attention in New Delhi. India should remember the role of the Taliban in colluding with the hijackers of IC-814 in Kandahar and its continuing association with Pakistan’s ISI and the JeM.