This agitation is not just about farmers now 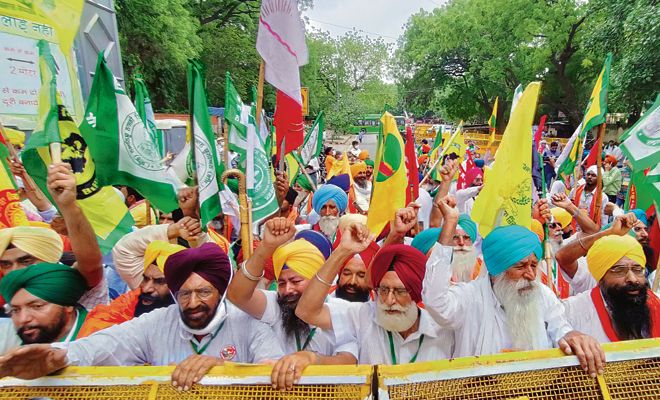 JULY 26 was a special day to ask a big question: can the farmers’ movement be the vanguard we need in rescuing our constitutional democracy and reclaiming the republic?

On July 26, the historic kisan morcha at the borders of Delhi completed eight months. The Samyukt Kisan Morcha (SKM) marked the day by organising an all-women Kisan Sansad within earshot of Parliament. Just when the Bharatiya Janata Party (BJP) was hoping to erase the farmers’ movement from the country’s mindscape, it sprang up to occupy the centre stage once again. The successful and peaceful conduct of Kisan Sansad addressed some of the real as well as orchestrated anxieties associated with the Republic Day protest this year. The same day, the SKM leadership was in Lucknow to announce ‘Mission UP and Uttarakhand’. The detailed calendar for these two states signalled a move to expand, deepen and intensify the movement.

It so happened that Rahul Gandhi chose the same day to drive a tractor to Parliament with a banner opposing the three farm laws, leading to a day-long detention of some Congress MPs. Within the House, all Opposition MPs followed the whip issued by the farmers’ movement and continuously raised the issues flagged by the farmers. This rare coincidence of protests inside and outside Parliament may have meant little to the Narendra Modi government, but it did indicate the political clout of the farmers’ movement and its role as the opposition in the country, currently.

My answer is in the affirmative. Not because I draw upon ‘insider information’ as a participant, not because I believe in any special virtues of the peasantry. I believe the farmers can play a decisive role in reclaiming our rapidly shrinking republic because their class interest happens to coincide with the project of saving the soul of India. If democracy, diversity and development are the three key pillars of the idea of India, farmers’ movement cannot but provide anchors to all these ideas. In saving themselves, the farmers save the republic of India.

I am not suggesting that farmers are inherently more democratic than other classes of citizens. They are not. But one thing is clear: in today’s India, farmers need democracy more than other classes. Businessmen can buy their way to achieve what they need. The middle class can access power through bureaucracy and occasionally through judiciary as well. The working class in the organised sector still has some, though fast-dwindling, procedural protections to safeguard their interests. Farmers as a group have no avenue open to them other than street politics, agitations and movements. They need democratic spaces to exercise this option. Their class interest coincides with the project of saving democracy. The ongoing farmers’ movement is acutely aware of this. It is not a coincidence that exactly a month ago, the farmers had marked June 26, the Emergency Day, by organising ‘Save Agriculture, Save Democracy’ protests outside Raj Bhawans across the country.

Similarly, the farmers’ movement provides the strongest bulwark against the assault on the idea of a diverse India. Not just because farmers and farming are inherently diverse and protecting farming is about protecting diversity. And not merely because the movement happened to have originated among the Sikh peasantry. Above all, the project of uniting farmers requires the movement to take on the BJP’s politics of divide and rule. In Punjab, Haryana and Uttar Pradesh, the farmers’ movement has already established itself as the most powerful organised force to take on the politics of communal division. As the movement spreads to other regions of the country, this is the true ‘Bharat Jodo Andolan’.

Finally, the farmers are a force that can shape an alternative path to India’s development. Again, it is not that farmers believe in alternatives more than anyone else. It is just that their livelihood concerns and collective interest push them towards equity and ecological sustainability. The present movement underlines the farmers’ quest for equity, their demand for a dignified minimum price for their produce, and their determination to combat corporate takeover of agriculture. Sooner than later, the challenge of climate change would force the farmers to be the torchbearers of sustainability as well. Poor ecological practices are now beginning to turn into poor economics for the farmers and causing their ruin. Farmers are not some relic of the past. They can be a potent force to shape India’s future.

First, this is not an argument about the necessity and inevitability of farmers’ role in history. Farmers need not always play the role of a revolutionary vanguard, the role assigned to the working class in the Marxist theory. But there is one commonality with the logic advanced in The Communist Manifesto: like the proletariat, the farmers in today’s India are the only class whose interest happens to be aligned with the forward movement in history.

Second, this won’t happen by itself. The alignment of interests ensures that the farmers are well placed to play a historic role. But it all depends on how consciously and carefully the farmers’ movement takes up this task. It depends upon how the present movement combines the immediate economic issues of the farmers with the larger political issues involving their long-term interest. It depends on how well the movement succeeds in spreading itself beyond its current geographic epicentre and in uniting all sections of Indian farmers, from big landowners to the landless peasants. That is the historic responsibility of the farmers’ leadership.