Time to define the law on marital rape

There is an urgent need for the judiciary to recognise marital rape as an offence under the IPC, especially now when there is a surge in domestic and sexual violence cases against women due to the pandemic-induced conditions. Now is the time to make amendments to the age-old definition of rape. We need to ask whose interest the legislators are safeguarding in the name of protecting the status quo of marriage. 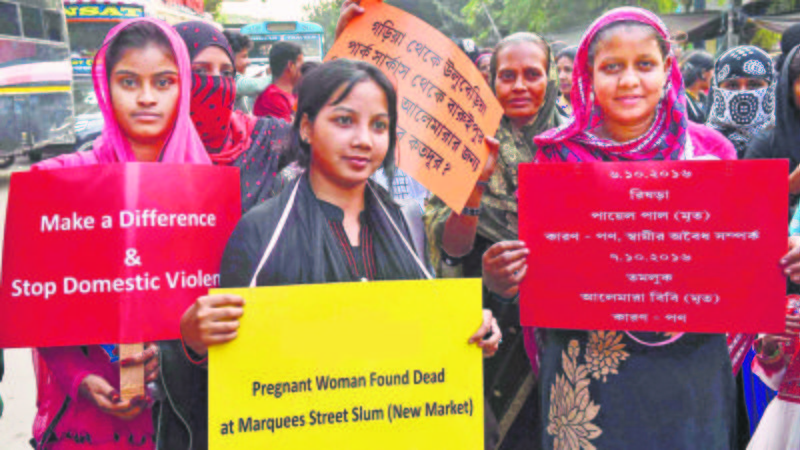 At Receiving end: A patriarchal set-up has led to acts of violence against women. PTI

Feminists and women’s rights groups have long demanded criminalising of marital rape. But unlike domestic violence, and the various other aspects of rape, marital rape is yet to be a part of mainstream public discourse, especially in India’s deep-rooted patriarchal society. In fact, India is one of the 36 countries in the world where marital rape is not criminalised. Since it is not a crime to rape a wife, the National Crime Records Bureau (NCRB) does not maintain any separate statistics on marital rape. The government seems to have turned a deaf ear in the name of culture or the family domain and privacy. Even the judiciary has conveniently given the responsibility to the legislature and has not played an exemplary role on this issue.

Undoubtedly, not making marital rape a crime in India is a message to the women of the country that as against their husbands, their consent to any sexual activity ceases to matter. It underlines the fact that a woman’s body, after she gets married, is her husband’s property and her own right, her own agency and her own autonomy over her body cease to exist. In other words, under the Indian law, a woman, whether she likes it or not, grants perpetual consent for cohabitation to her husband. Marriage gives a husband licence to engage in sexual behaviour with his wife as he wills and wishes. Any dissent is unacceptable not only to the husband but also to the patriarchal family. The irony is that few women are aware of this concept of marital rape. They are accustomed to the fact that having sex in marriage is a necessary corollary, even if it is coerced. As a result, women have less personal freedom and worse psychological and emotional well-being.

Both the judiciary as well as the government is divided in their approach to tackle the issue. The High Courts of different states have given differing verdicts leading to utter confusion. For example, in August this year, the High Court of Chhattisgarh observed that sexual intercourse or any sexual act by a husband with his spouse would not constitute rape even if it was forcible or against the consent of a legally wedded wife. The high court’s stance on the issue came days after a two-judge bench of the Kerala High Court upheld a family court’s decision to allow divorce on the grounds of marital rape because it constitutes physical and mental cruelty. Multiple petitions have been filed in various courts across the country to criminalise marital rape. Unfortunately, none of them have reaped any benefit yet.

The judiciary has conveniently given the responsibility to the legislature and has not played any active role on this issue. The government seems to have turned a deaf ear in the name of culture or the matter falling in the private domain. A Rajya Sabha member declared that ‘the concept of marital rape, as understood internationally, cannot be suitably applied in the Indian context due to various factors — e.g. level of education/illiteracy, poverty, myriad social customs and values, religious beliefs, mindset of society to treat marriage as a sacrament…’ According to many members, recognising marital rape would lead to ‘excessive interference with marital relationship’ which has the potential of destroying the institution of marriage, which is sacred in India. Most recently, in 2018, a private Bill introduced by Congress MP Shashi Tharoor in the Lok Sabha, sought to criminalise marital rape, among other rights. However, it lapsed after the failure to garner support from the elected government.

While recommending changes to India’s rape laws, the Justice JS Verma Committee, constituted after the Nirbhaya rape case, said in 2013 that forced sex/sexual violence between spousal partners should also be considered as rape and punished as a criminal offence. The UPA government did not incorporate this suggestion, arguing that such a move would destroy the institution of marriage. The BJP-led NDA government has the same viewpoint. In fact, it has come up with a list of justifications as to why rape within a spousal relationship isn’t a crime. The judiciary too has not been progressive on the issue. Early this year, the Supreme Court refused to entertain a woman’s petition to declare marital rape a criminal offence, arguing that it couldn't order a change in the legislation for one person.

It is beyond doubt that marital rape is widespread, and refusal to recognise it emanates from misogyny and patriarchal mindsets that are deeply entrenched in Indian society. The government’s position has drawn criticism from all quarters. The UN Committee on Elimination of Discrimination against Women had twice (in 2007 and 2014) urged India to criminalise marital rape. It made no difference. One of the arguments being used is that women can misuse such a law if it came into force and they would file false cases of rape against their husbands. However, it would be worthwhile to keep in mind that any law can be misused. That doesn’t mean it should not exist. It is for the judiciary to carefully examine each case and also make proper suggestions so that loopholes can be plugged. Why can’t our male-dominated legislature and judiciary understand that a wife is a partner and not a possession? When we could pass laws to end certain anti-women customs, like Sati and female infanticide, why can’t we address this one?

There is an urgent need for the judiciary to recognise marital rape as an offence under the Indian Penal Code, especially now when there is a surge in domestic and sexual violence cases against women due to the pandemic-induced conditions. Now is the time to make amendments to the age-old definition of rape. We need to ask whose interest the legislators are safeguarding in the name of protecting the status quo of marriage — the husbands raping, or the wives being raped.