To be fair and just 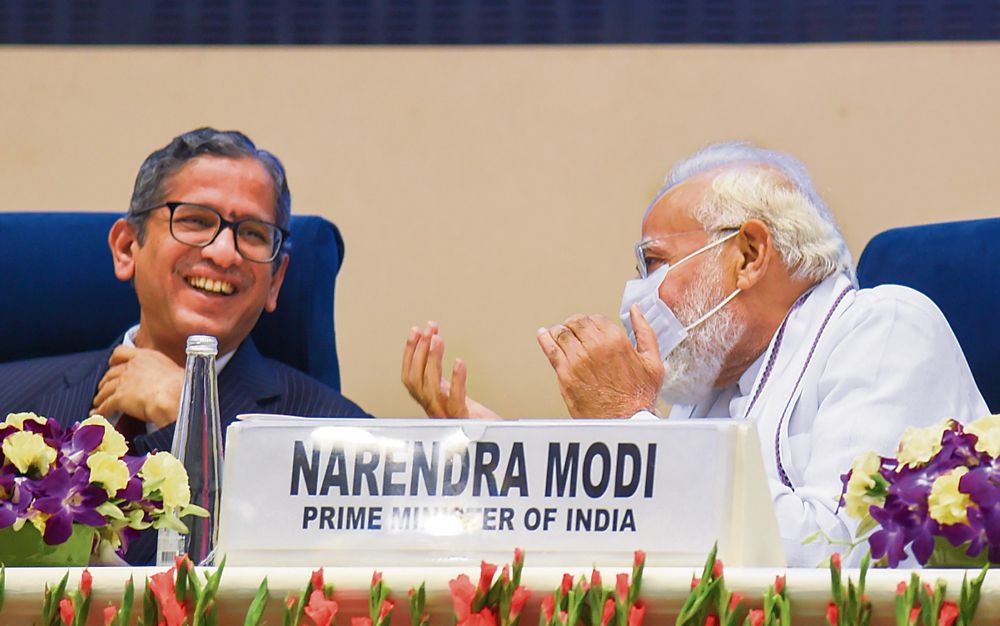 At stake: Indian democracy is being enfeebled by the undermining of the rule of law. PTI

The 11th Conference of Chief Justices and Chief Ministers, which took place recently, drew attention to how India’s judicial system is failing the ordinary citizen of India and, in a more fundamental sense, failing India’s constitutional democracy. It also brought to the surface the indispensability of the three arms of the state — the legislature, the executive and the judiciary — working in tandem to serve the citizen even as they provide a system of checks and balances against one another. The principle of accountability, which is so important in a democracy, is both sectoral and collective. Each arm of the state is accountable for the specific responsibilities that devolve on it from the Constitution. But there is also the state’s collective accountability because unless its three arms are mutually supportive in delivering good governance to the people in whose name they exercise authority, each arm can become a constraint on the others.

The CJI has delivered home truths about the inadequacies of our judicial system and the responsibility of the executive and the legislature to support the judiciary.

Legislation may be poorly worded, leave various loopholes and rules for its implementation may work to frustrate rather than facilitate implementation. It is then left to the courts to remedy the infirmities in the legislation through their judgments. The due diligence that ought to be performed by the legislature itself and/or the bureaucracy is mostly missing. The more precise the legislation and the rules framed under it, the less the need for judicial interpretation and action. We have also witnessed how governments ignore what they consider inconvenient judgments even at the level of the Supreme Court. The continuing non-implementation of police reforms mandated by the apex court in its landmark judgment of 2006 is a glaring case in point.

The judiciary has often failed to perform its role as the sentinel of the rights guaranteed to the citizen under the Constitution. We have been witness to the inordinate delay in the Jammu and Kashmir High Court hearing and disposing of even habeas corpus appeals addressed to it in the wake of the detention of a large number of local political leaders, activists and ordinary people in the wake of the abrogation of Article 370.

The speech by the Chief Justice of India, NV Ramana, in the presence of PM Modi, was remarkable for being forthright, in particular his reminder to both the legislature and the executive of their respective roles in enabling the judiciary to fulfil its responsibilities towards the citizens of India. He drew attention to the vastly increased caseload on the judiciary while both the human resources and physical infrastructure continue to fall further and further behind the growing requirements. For example, since the convening of the 10th Conference held six years ago, the pendency of cases had doubled but the number of judicial officers had increased from 20,811 to 24,112 only. There are only 1,104 high court judges in this country and there are 388 unfilled vacancies. There are only 20 judicial officers per million of population, which is ‘alarming’ compared to developed country democracies. He may have been reticent about mentioning how large the gap is. According to reports, there are more than 20,000 magistrates and judicial officers per million, on an average, in the developed G-7 democracies.

The situation is equally dire in respect of the population/police ratio. In 2020, there were only 156 police personnel per lakh of population, though the sanctioned strength, itself very low, was 200. The UN-mandated ratio is 230. The CJI also drew attention to poor policing, including the prevalence of custodial deaths.

He was blunt in portraying the government itself as the ‘biggest litigant’, as it was responsible for 50% of the caseload. This, too, is a shocking figure. Having been in government, I have witnessed extreme reluctance on the part of government departments to accept adverse judgments of lower courts. They routinely file appeals right up to the highest court before giving up. In the case of income tax, figures available for the end of financial year 2017 revealed that there were 1.37 lakh direct tax cases pending before the IT appellate tribunals, high courts and the Supreme Court and the amount involved was Rs 4.96 lakh crore! The current figure must be much larger.

Modi referred to the use of digital technologies that have made the service of justice easier and more efficient but the need to expand their use significantly. He said the e-court project is being pursued in mission mode and pointed to the plight of a large number of undertrials — 3.5 lakh — whose cases needed to be handled in a humane spirit and with sensitivity. This is certainly an area where the judiciary and executive could work together to alleviate the situation. What should also be welcomed is the PM’s commitment to ridding the country of a whole series of outdated and irrelevant laws which are still on the books. He claimed that while the Centre had abrogated 1,800 such laws, the record of the states in this respect was at 75 only.

Both the CJI and the PM stressed the need to draft laws in simple language, avoiding legal jargon. They also proposed the use of regional languages at least in the lower courts and this is important for the delivery of justice in an inclusive manner.

The CJI delivered some home truths about the inadequacies of our judicial system and the responsibility of both the executive and the legislature to support the judiciary in the more efficient and timely performance of its tasks. His message was timely. Indian democracy is being enfeebled by the undermining of the rule of law. The criminal justice system and the judiciary need urgent and sweeping reforms. On this we have the word of none other than the holder of the highest judicial office in the country.