Tough for Congress to fill void left by Patel

Patel’s ability to listen and paper over differences within the party was part of the Congress folklore. He singlehandedly resolved some of the biggest crises the Congress faced: from smoothening the relations between Sonia Gandhi-led National Advisory Council and Manmohan Singh-led PMO, to the recent revolt by a group of dissenters. With Patel gone, who is going to patiently sit and resolve differences amicably? 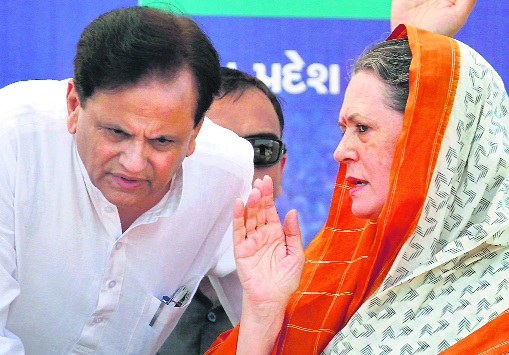 Excellent Manager: Few leaders in the Congress can step into Patel’s shoes.

The death of AICC treasurer Ahmed Patel has left a deep void in the Congress. Patel was literally a one-man army, which will now require at least four replacements in the party battling on many fronts, including a mutiny of sorts.

In this context, the internal troubleshooting mechanism assumes significance. On the face of it, there is no dearth of leaders — from veterans Ashok Gehlot, Capt Amarinder Singh, Kamal Nath, P Chidambaram and K Raju to middle-rung Ajay Maken, DK Shivkumar and KC Venugopal to the younger lot of Sachin Pilot, Milind Deora and Bhanwar Jitendra Singh to play the role of a crisis manager, but somehow none among these three rungs of party leaders can step into Patel’s shoes.

Patel’s ability to listen and paper over differences within the party was part of the Congress folklore. He singlehandedly resolved some of the biggest crises the Congress faced: from smoothening the relations between the Sonia Gandhi-led National Advisory Council and the Manmohan Singh-led PMO, to the more recent revolt by a group of dissenters known as G-23. At an informal level, over a dozen dissident leaders had reportedly told him that they would stay back in the Congress.

With Patel gone, the big question doing the rounds in the party circles is whether some of these restless leaders would stay back. And, more importantly, who is going to patiently sit and resolve the differences amicably? The near absence of a leader having the wherewithal of acceptance, patience and neutrality to work out a peace deal may sharpen and accelerate the Congress’ internal divide.

Also, there is a question mark whether Team Rahul Gandhi would display a greater willingness to deal with those who disagree with them internally. The buzz in the Congress is that key Rahul advisers want the announcement of party polls. They are contemplating a showdown for the party president’s post. Those advocating this line of thinking say that Rahul should stop dithering and take the mantle of leadership and run the Congress organisation as per his political instincts, whims and fancies.

In this scheme of things, Sonia Gandhi, who is currently the interim party chief, is expected to adopt a rather apolitical and ‘neutral’ posture, while Priyanka Gandhi is likely to declare her open support for the new party chief.

Controlling the AICC secretariat and party apparatus is a relatively easier task for Rahul and his associates. But purely in electoral terms, this decisive strategy has limited dividends. From Assam to Bengal, Tamil Nadu and Puducherry (Kerala has a well-established UDF alliance), the Congress lacks a crafty party manager to negotiate alliances.

Patel’s relationships across party lines ensured that the Congress could do many things. He was the bridge between parties, such as the Mulayam Singh Yadav-led Samajwadi Party, Lalu Prasad Yadav-led Rashtriya Janata Dal, Shibu Soren-led Jharkhand Mukti Morcha, Sharad Pawar-led NCP or Stalin-led DMK. And in his typical style, he gave all credit to Sonia who had her own skilful way to win over allies and enhance the bond. This was evident during the 17-month-long stint of Rahul as the 87th president of the AICC (December 2017 to May 2019) when allies preferred to talk and deal with Sonia under the guise of UPA Chairperson.

It was Patel, for example, who had convinced her to consider the Shiv Sena as an ally in Maharashtra to keep the BJP out, even though the Kerala unit of the Congress had opposed a tie-up with a hawkish Sena. Similarly, he was instrumental in getting key Bills passed in the UPA and during the election of both Pranab Mukherjee and Hamid Ansari as President and Vice-President, respectively. Even inside the Parliament, floor leaders like Ghulam Nabi Azad, Anand Sharma and Adhir Ranjan Chaudhary lack the rapport or the necessary gravitas to team up with non-NDA parties. If Azad is replaced by Mallikarjun Kharge as the Leader of the Opposition in the Rajya Sabha, the change of guard is hardly going to make any difference.

Post 2014, the Congress coffers are constantly drying up while there is a sign of reducing expenses related to elections, salaries of employees or the cost of the administration. Patel, like predecessors Motilal Vora and Sitaram Kesri, was AICC treasurer par excellence, raising funds from corporate and individual sources and disbursing them discreetly. Looking at the present pool of talent, there is hardly anyone who can do that job. The option of bringing back Vora is ruled out as the veteran leader is 92 and not keeping too well. In the Congress circles, Rahul’s former aide Kanishka Singh is seen as a person who was being groomed for that role. Milind Deora and Rajiv Shukla are two other contenders who enjoy rapport and draw respect from some business houses.

But having been out of power since 2014, the new treasurer’s job in getting funds and courting new friends would not be easy. In any case, cutting across party lines, there is a ring of mystery over how political funds are raised and how money comes.

Enthusiasm for party or presidential polls is one thing and organising such a mammoth exercise is another. If Rahul throws his hat in the ring, he has to ensure the victory of his entire team, i.e. election of the state unit chiefs. Here again, Patel’s services will be sorely missed. He had a fantastic network within the Congress. Patel could get things done with a single phone call.

In fact, for rallies, protests, programmes and mobilisation of funds, he was the go-to person. No one in the Congress organisation has that kind of reach or influence any longer. For a while, both Ashok Gehlot (when he was general secretary, organisation) and Digvijaya Singh (when he was general secretary) had displayed some qualities. The Rajasthan Chief Minister is apparently unwilling to move to the AICC secretariat. In any case, Rahul will be under pressure to bring someone younger.

In a nutshell, post Patel, the Congress is set to witness some tempestuous and uncertain times.