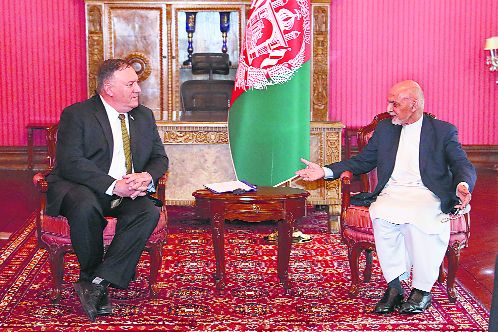 Behind the scenes: It is a false notion that America is washing its hands of Afghanistan. Efforts are on to bring about a compromise between Ghani and Abdullah.

A week is a long time in politics, as the late British Prime Minister Harold Wilson once said. This is truer today in regard of Afghan politics than anywhere else. During the week since US Secretary of State Mike Pompeo made an unannounced urgent visit to Kabul last Monday to meet with Ashraf Ghani and Abdullah Abdullah, the rival Afghan politicians who have each declared themselves President of the country after the disputed elections of last October, Afghan domestic politics and the US-Afghan relationship have touched a high level of criticality.

Tragically, the fidayeen attack last week on a gurdwara becomes a related incident. The attack took place after a phone call by PM Modi to Ghani in a vivid display of solidarity. The Indian reports give conflicting interpretations. Citing intelligence sources, they point a finger at Pakistan for staging the terrorist attack in Kabul, code-named ‘Blackstar’, while some accept at face value the claim by the ISIS owning responsibility.

It is entirely conceivable that these two readings are only notionally apart, since the ISIS is a riddle wrapped in a mystery inside an enigma. Now, why should there be such paranoia on the part of the Pakistani ‘Deep State’? To understand that, again, we revert to the changing alignments in Kabul politics.

The Afghan political landscape has multiple inter-locking templates. The power-sharing arrangement that Washington imposed on Ghani and Abdullah following the presidential election in 2014 has been in meltdown in recent years and has now dissolved. A Ghani-Abdullah rapprochement seems unlikely.

The Afghan politicians are choreographing their future without American patronage. They are acutely aware that the Taliban is knocking at the gates and cannot be kept out. Bad as it is, the really agonising part is that the US is also forging a future partnership with the Taliban.

From Kabul last Monday, Pompeo flew to Doha on a stopover to meet top Taliban leader Mullah Baradar before announcing a $1 billion cut in US aid to the Kabul regime. The signal is overpowering — unless the Afghan politicians bury their hatchet and join intra-Afghan negotiations, as envisaged in the US-Taliban pact of February 29, the US will explore other options.

The US announcement on aid reduction also contained an intriguing passage which says, ‘We have made clear to the [Afghan] leadership that we will not back security operations that are politically motivated, nor support political leaders who order such operations….’

Simply put, Ghani’s hardline associates who handle security portfolios — intelligence, armed forces and police — have been warned in no uncertain terms against attempting any usurpation of power. Abdullah also stressed subsequently that the Afghan security forces should not ‘meddle in political affairs’.

This new alchemy of US-Afghan ‘partnership’ works to Pakistan and Taliban’s advantage. The Taliban is showing flexibility to engage with Ghani and is projecting itself as the solution rather than the problem. This is smart thinking, as Ghani is a lame duck already, and there is no point nitpicking him. Most other senior politicians — including Abdullah and former President Hamid Karzai — are seemingly willing to work with Pakistan.

Above all, Pakistan, which calibrated the US’ proximity with the Taliban, is de facto facilitating the implementation of a decision taken by none other than President Trump — an orderly US withdrawal from Afghanistan. In the period ahead, Pakistan’s help will be crucial for the Trump administration. On the other hand, Pakistan has vast experience in dealing with Afghan politicians. To jog memory, Pakistan kept a line of communication open to Najibullah — despite undermining the PDPA regime — and once at least promoted a (abortive) coup d’état in Kabul by the then defence minister Shahnawaz Tanai in 1990.

Unsurprisingly, Pakistan prefers to gently ease out Ghani but will not allow any outside ‘spoiler’ at this stage to instigate him. Any such outside interference in the endgame will not find favour with the US either at this juncture.

There isn’t going to be any restraining influence on Pakistan if push comes to shove, because its power projection into Afghanistan through the past four decades — at enormous cost and sacrifice — is reaching its finale and an outcome that it sought so tenaciously is almost within reach. Would any country act differently if its core interests are at stake, especially vis-a-vis a neighbour with whom it has a 2,430-km disputed border?

India needs to tread carefully on this dangerous minefield. It is not within India’s capacity to fill in the power vacuum that the present twilight period engenders. Pakistan has successfully managed the regional acceptance of the mainstreaming of the Taliban. Iran recently even called for the formation of a post-Ghani inclusive government in Kabul that is representative.

However, it is a false notion that the US is washing its hands of Afghanistan. Efforts are going on behind the scenes to bring about a compromise between Ghani and Abdullah. The consensus that has been reached on forming a negotiating team for the forthcoming talks with the Taliban is a step forward. Equally, the choice of Cambridge-educated Masoom Stanekzai, former spy chief and trusted interlocutor of the western powers, doubtless underscores that the US intends to navigate the intra-Afghan talks toward a new power-sharing interim government in Kabul.

India should be wary. Strategic patience and foresight is needed. The US’ standing in the region will take a devastating blow if the intra-Afghan talks get torpedoed, forcing Trump into a 3 am tweet ordering the unceremonious withdrawal of US troops. Washington is determined to avoid such a denouement and expects partners and allies like India to cooperate.