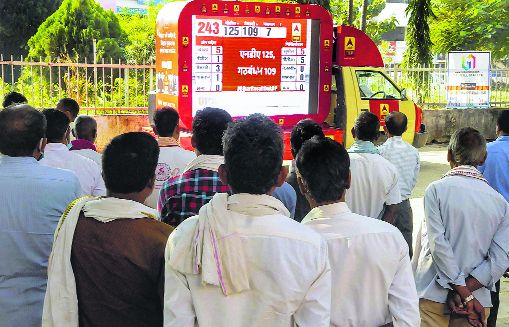 Doesn’t add up: An election where jobs, migration, flood relief and Covid should have been discussed got reduced to the arithmetic of caste and communities.

The shocking takeaway from the Bihar election is that the misery of millions of migrant workers who were force-marched back home empty-handed from cities across the country finally mattered little. The economic disruption caused overnight by the Central Government’s decision to lock down the nation — with no notice or adequate time to prepare or repatriate workers or to help them survive wherever they were stuck — was supposed to have become an inflection point in electoral politics. The loss of 2.1 crore salaried jobs and more avenues of casual earning ought to have caused a dramatic, long-lasting turnaround. But all those who fell on their way home or those who walked and pedalled thousands of kilometres or those who travelled hiding in the bowels of concrete mixers, spending all their savings, seem to have taken the Covid lockdown too in their sore stride as just another episode in the general drama of pain.

For none of this seems to have had an impact on the voters’ attitude towards Prime Minister Narendra Modi or the BJP. The BJP, which swept the Uttar Pradesh Assembly elections in 2017 soon after the devastating blow of demonetisation, is emerging as the second largest party in the second biggest Hindi heartland state. What has worked in these elections is something far removed from lives and livelihoods — something more primordial than jobs and prosperity.

To understand these results, one has to look closely at the vote share of the Rashtriya Janata Dal. In the recent past, even when it fared the worst, the RJD had secured about 18 per cent votes in Bihar. For these committed followers, it did not make a difference whether Lalu Prasad Yadav was a terrible administrator, lording over a kidnapping industry, or a man battling corruption charges, or promoting his wife and children instead of creating strong second-rung leadership. All that counted was that Lalu was the supreme leader of a caste group, which had aligned with another community. The Muslim-Yadav electoral alliance was the defining be-all and end-all of Bihar’s politics from 1990 to 2005. In those 15 years, Lalu had cynically installed his wife Rabri Devi as Chief Minister three times to rule by proxy when he was arrested for graft.

Lalu’s was termed the politics of social justice, but in real terms it was identity politics of caste pride and communal power. The question over ‘vikas versus izzat’ or ‘development versus pride’ was a no-brainer. But what was passed as a pushback against the old feudal order or the assertion of the backward caste masses was actually the arrival of a new dominant caste and a new ruling order. Those who were being killed were not just Ranvir Sena’s upper-caste ganglords, but also idealistic Left leaders like Chandrashekhar Prasad of the CPI (ML), twice elected as the JNU Students’ Union president. The prime accused in Prasad’s murder was Siwan’s uncrowned king Mohammad Shahabuddin, a close associate of Lalu and a working committee member of the RJD. Pappu Yadav, another old RJD strongman, was convicted by a trial court for the murder of CPI(M) MLA Ajit Sarkar in Purnia. Now, in the run-up to the just-concluded Assembly polls, no CPI (ML) leader remembered Prasad, and obviously no CPI(M) campaigner spoke of Ajit Sarkar because the two Communist parties were gaining immensely from the RJD’s identity politics and its Muslim-Yadav votes.

These elections yet again proved that Lalu’s caste men and their social allies can consolidate into a strong vote block, carving up 18-23 per cent of the state's vote share even in his absence. Such a consolidation of caste and religious forces obviously lures partners. The Congress, CPI(ML), CPI(M) and CPI have all obsequiously lined up to be led by Tejashwi Yadav, Lalu’s 31-year-old younger son — clearly not a new dawn of social justice. They all had their eyes firmly set on the RJD’s vote share that is transferrable to even minor allies in a given constituency. Such a block of votes and a strong consolidation of caste and religious forces ought to trigger in time a counter consolidation, however feeble and fractured it may be. And that is the phenomenon that is getting unleashed in Bihar. The fear of the dominance of the Yadav middle caste and peasantry has been prompting the coalescing of the upper castes, non-Yadav OBCs and Mahadalits. It is simply identity politics versus identity politics, in which the single biggest caste or communal group gets defeated by all the other castes and groups coming together as one block. The BJP, obviously, has not achieved this defeat of the RJD on its own. Without Nitish Kumar’s leadership and his JDU’s legitimacy, the non-Yadav OBCs do not see much in the BJP, which is largely an upper-caste entity in Bihar.

So, unfortunately, an election in which jobs, migration, flood relief, Covid, public health, education and the dignity of labour at home and in host states should have been discussed has got reduced to the arithmetic of caste and communities neatly stacked for and against Prime Minister Modi. Unbeknownst to his detractors, in this process Modi is gaining a block of voters across the country. When Modi refers to the ‘Yuvraj of Jungle Raj’, he is blowing a dog whistle that sets off a political process, and so it is when he talks of the temple at Ayodhya in the same breath. And the numbers are gradually accruing for Modi to create a consolidated block of voters who initiate a process across the country, just as Lalu, Mulayam Singh Yadav, Mayawati and others had fashioned a vote block using a coalition of communities. After every election, Modi more and more resembles the old satraps who sit on a pile of committed communal votes, firmly secure in caste or religious silos.