Tough times ahead amid growing bankruptcy and Taliban violence 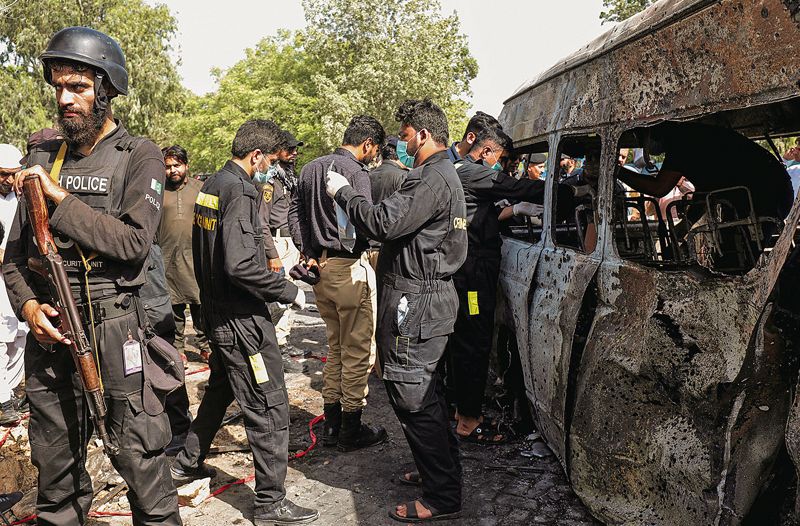 Terror: The TTP has carried out about 140 attacks in the past three months. Reuters

Ever since the 9/11 terrorist attack in New York by the Al-Qaeda, the US has kept a global watch to track down those involved in the attack. The mastermind of the attack, Osama bin Laden, was tracked down and killed in the cantonment city of Abbottabad, located close to the Pakistan army’s elite Military Training Academy, in 2011. The US search for the perpetrators of the 9/11 attack continued relentlessly, with President Biden announcing last year that US airstrikes had killed Osama’s successor, the 71-year-old Ayman-al Zawahiri, living in the heart of Taliban-ruled Kabul. Biden described Zawahiri as ‘one of those most responsible for attacks that murdered 2,977 people on American soil’, while adding that ‘for decades, he was the mastermind of attacks against Americans’.

Pakistan has only itself to blame for TTP’s rise, as it looked the other way while playing host to as well as arming and equipping Taliban leaders and cadres on its soil.

The reality, however, is that the Al-Qaeda steadily disintegrated across the world after Osama was killed. Other radical Pakistan terrorist groups emerged with the passage of time, which have not targeted India. Even China is the subject of public wrath in Balochistan for its close involvement with the Pakistan military in the Gwadar Port project. Two of the most significant armed, radical Islamic groups still remaining across the subcontinent are the Afghan Taliban and its Pashtun brethren, the Tehrik-e-Taliban Pakistan (TTP). Both groups started off as allies of Pakistan’s ISI. Both now loathe and ridicule the ISI. The TTP remains influential in the tribal areas of Pakistan’s Khyber Pakhtunkhwa province, with a relatively small number spreading into northern Balochistan. The growing influence of the TTP has led to increasing concern and anger in Pakistan. The TTP has carried out about 140 attacks in Pakistan in the past three months, including a suicide attack in Islamabad. The prospects for any Pakistan-TTP dialogue remain bleak.

In a recent television interview, Pakistan’s interior minister Rana Sanaullah proclaimed that Pakistan could target TTP militants in Afghanistan if the Afghan authorities in Kabul did not take action against them. The Pakistan government believes that the TTP has 7,000 to 10,000 cadres based in Afghanistan and in the Pashtun tribal areas of Pakistan. Virtually mocking Pakistan, Afghanistan’s deputy PM Ahmed Yasir warned its neighbour of serious consequences in case of an attack on Afghanistan. He tweeted a photograph of Gen AAK Niazi signing Pakistan’s document of surrender to the Indian Army in Bangladesh in 1971.

Pakistan has only itself to blame for the TTP’s rise, as it looked the other way while playing host to, and arming and equipping Taliban leaders and cadres on its soil. Some of these leaders have assumed ministerial positions in Kabul.

Pakistan had justified its earlier support for the Taliban, claiming that the Taliban presence in Kabul gave it ‘strategic depth’ against India. This, after the Taliban colluded with the ISI during the hijacking of IC 814 in Kabul. While New Delhi has not formally recognised the Taliban, it has established a working relationship with the Taliban administration for providing medical and other assistance to the people of Afghanistan, and maintaining an office in Kabul. Like Russia and China, India has avoided taking an adversarial or judgemental position on its relations with the Taliban.

Pakistan is now threatening to attack TTP members residing in its Pashtun-dominated tribal areas, and also across the border in Afghanistan, evidently, with US encouragement and support. This could result in uniting Pashtuns on both sides of the Durand Line to take on the Pakistan army. It is estimated that 374 Pakistani security personnel and 365 TTP fighters were killed in combat last year.

The focus on the geopolitics of Afghanistan by Pakistan and the US ignores the increasing misery the people of Pakistan face, as the country stares at the prospects of continuing bankruptcy, despite efforts by the US, IMF, and other friends, like Saudi Arabia and China, to bail it out. Pakistan’s astute finance minister Ishaq Dar, who works in consultation with the sober planning minister, Ahsan Iqbal, has acted realistically in dealing with the economic crisis. There is an expectation by Pakistan of an early $3 billion Saudi bailout. But these measures are of little relevance in the longer term until Pakistan meets the stringent IMF conditions. Pakistan could face a payments default if it mismanages or miscalculates on its foreign exchange holdings.

While the US may relish Pakistan attacks on the TTP and Taliban strongholds, the Taliban will not stand by idly if its kinsmen are attacked.

In the meantime, the Shehbaz Sharif government appears to be losing public confidence. While Pakistan could slowly pull itself out of its economic turbulence, the reality is that the government will have to take hard financial decisions that will not endear it to the electorate in the general election later this year. Despite promises of assistance from Saudi Arabia and others, the days ahead are going to be hard. This situation is becoming murkier, with efforts by the ruling dispensation to get Imran Khan disqualified from participating in the polls.

The recent retirement of General Bajwa and the appointment of his protégé, Gen Syed Asim Munir, as his successor, would appear to indicate that the present relationship between Pakistan and the Biden administration would continue. General Bajwa had, after all, overseen the supply of arms and ammunition from Pakistan to Ukraine in aircraft of the Royal Air Force. There are noises from Washington, backing Pakistan’s policy of getting tough with the Taliban. It would, however, be vital to remember that Afghanistan has a history of being the ‘graveyard of empires’.