US desperate to establish a Taliban-Kabul elite roadmap, the sooner the better 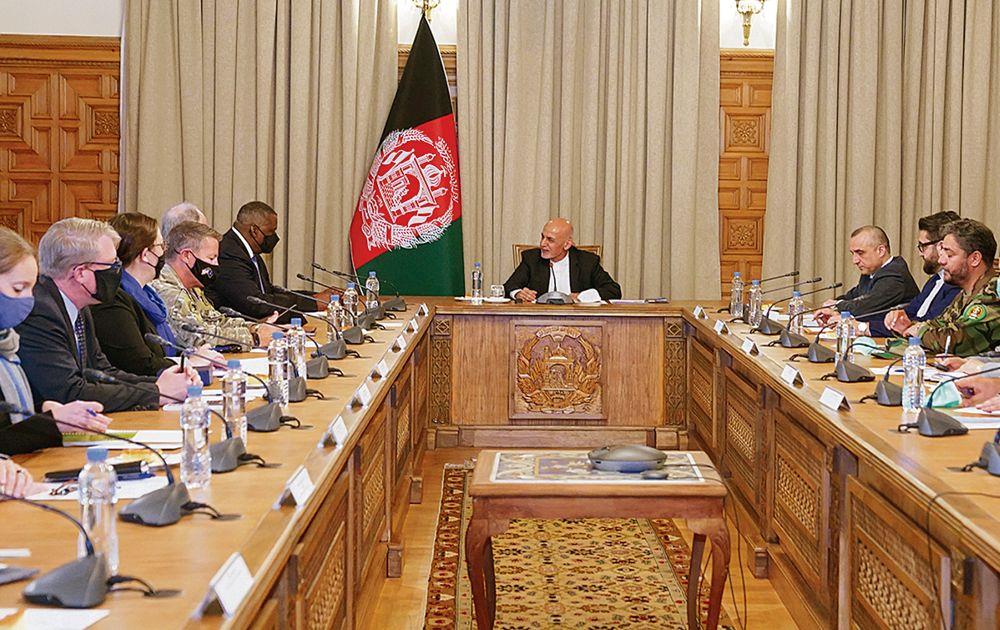 In a fix: If Afghanistan descends into chaos, it would profile US failure. Reuters

Amidst the confusion and contradictions of the current situation in Afghanistan, three elements stand out. First, US President Joe Biden wants to end his country’s longest war, even if he is considering the possible need for some continuing US force presence in Afghanistan to fully ensure that its territory is not used for a terrorist attack on American interests, particularly on its mainland, and also outside it. He does not want Afghanistan’s ‘descent into chaos’. That would profile the failure of two decades of US presence in Afghanistan.

He may not find it possible to adhere to the US-Taliban agreement’s May 1 deadline for the withdrawal of US troops. Reports indicate that US negotiators are attempting to persuade the Taliban to extend the deadline. The deal will not break down on this issue, but the Taliban would want concessions in return.

Second, with continuing Pakistani support, the Taliban has eclipsed the government to become the primary factor in the contemporary Afghan scene, at least in perceptual terms. While its ideology rightly evokes abhorrence, the fact that its insurgency is largely succeeding is undeniable. If that was not so, it would not have gained international legitimacy or negotiated with the Kabul political elite from a virtual position of strength. It is difficult to quantify its territorial sway in Afghanistan, but its influence extends over large swathes of territory where it manages a shadow administration, even if governance structures exist. The Taliban has also displayed a large measure of cohesion.

Third, unlike the Taliban, the Kabul political elite is frayed. Factional and ethnic divisions as well as two Presidents who failed to provide inspiring leadership to knit a diverse people and imbue them with a sense of national purpose have contributed to the present sorry state of political incoherence. While the US must share the major blame for its inability to militarily crush the Taliban insurgency by permitting it, inter alia, the safe hinterland of Pakistan, it was for Afghan leaders, especially the Pashtuns among them, to have taken risks to politically wean the Afghan Pashtun away from the Taliban. They failed to do so, giving the Taliban the opportunity to consolidate itself.

The interplay of these three elements has contributed to shape the current realities of the Afghan situation. While imponderables remain, their interaction will also determine the future of this fractured land. What is happening now and what can be expected?

The result of political divisions in the Kabul political elite at this crucial time is a sapping of popular confidence in it. This is leading the well heeled to make arrangements abroad, in case they need to leave at short notice. It is also resulting in a yearning for peace among the people at large. There is great suspicion of the Taliban among the non-Pashtuns, but there will be those among them who may make compromises for peace. All in all, a sense of uncertainty is prevailing in the country.

Taliban and Kabul elite leaders met in Moscow 10 days after US Secretary of State Anthony Blinken’s blunt, if not rude, letter to Afghan President Ashraf Ghani as well as the US-prepared Draft Peace Plan (DPP) became public around March 8. Russia had arranged a meeting of the US, China and Pakistan, apart from itself. It also invited Qatar and Turkey. Afghan government representatives maintain that in Moscow, the Taliban exposed their intransigence and arrogance and refused to show any flexibility which led to the extended troika publicly declaring, ‘We do not support the restoration of the Islamic Emirate.’ This assertion would not however deter the Taliban from refusing to accept the DPP’s recommendation that the Afghan republic’s constitution be the ‘initial template’ for the preparation of the future constitution.

All eyes are now on the Turkey meeting, as proposed in the DPP, in the week beginning April 12. The US will desperately attempt for a common Taliban-Kabul elite roadmap on the curtailment of violence and a ceasefire, power sharing and some agreed elements of the future system to emerge from the meeting. It is engaging the Taliban for this purpose. At the same time, the Kabul elite is trying to reconcile differing viewpoints on these issues. Meanwhile, Ghani has put forward ideas that emphasise ceasefire and a political settlement leading to presidential elections and a government of peace followed by talks on the constitution. Ghani’s real purpose — the continuation of his government — is hardly disguised in this proposal. He does not want to hand power to anyone, but an ‘elected’ President. However, if the Taliban show flexibility, the US would exert maximum pressure on Ghani to give up the presidency so that an interim government is formed under a new leader.

At this stage, three broad scenarios are possible. One, the US manages to secure Taliban flexibility, leading to an agreement between Afghan parties on a large curtailment of violence, an interim government and some principles on the future system; two, the situation continuing much as now with the Taliban gaining ground; and, three, the US withdrawing completely and the country relapsing into ethnic fiefdoms and large-scale violence. Based on the three elements currently in play — the US wish for a managed exit, Taliban coherence and the incoherence of the Kabul elite — the third scenario is most unlikely, for that would deprive the US of even a fig leaf to cover its strategic defeat in Afghanistan. The second is possible, but the US will try for the first outcome and its success should not be ruled out, especially by Indian policy makers who seem unprepared for it.

For India, this is a time not to base its Afghan policy on wise and pious platitudes, but through a vigorous and open engagement with all Afghan parties at senior levels. This must necessarily include the Taliban, notwithstanding its ties with Pakistan.