The Delhi govt has to put its house in order. Help from the MHA in the form of ITBP assistance to run a 10,000-bed facility in south Delhi, the use of railway coaches as isolation wards and the attachment of hotels and banquet halls to hospitals show promise of improvement. The Centre needs to do more as the Capital can’t afford a bad name. 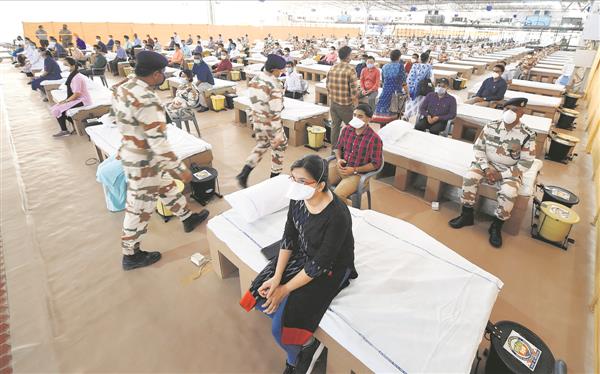 Capital woes: The spread of the virus has a lot to do with unauthorised clusters in Delhi.

Delhi has become the Covid capital of India, leaving Mumbai behind. People in Delhi are scared. Those having symptoms move from pillar to post to get the test conducted or to get admitted to a hospital though the state government says the beds are available. Testing from home is costly and now with a cap on the cost of testing, the labs are reluctant to collect the samples from home.

People have been asked to go to the testing centres but many find it difficult to visit there. The home isolation rules have also been changing. So, the mismanagement is obvious. Further, there are conflicting orders from the state government, Lieutenant Governor and the Ministry of Home Affairs on a regular basis, and they blame each other, subtle politics playing its part in the process. The coordination is missing. The entire structure of governance in Delhi, having multiplicity of authorities, is also to blame and needs a fresh look to bring about an alternative model. Surely, suitable models can be scouted from some capitals in the world. And if nothing suitable is found, a model can be locally thought of.

People of Delhi are also to be blamed. Many of them don’t follow the instructions. Social distancing norms are flouted and masks are not worn as seen in crowded markets. Some even spit openly and reporting for testing is not done even if there are symptoms. Strict enforcement and severe punishment along with culprits being named and shamed in the media will have the desired effect.

The number of containment zones is now being increased as some containment zones are being split into more zones for better management which will mean requirement of more resources. For this, an already stretched Delhi Police need to augment their strength through a massive recruitment of Home Guards which will also provide employment to many.

There are other factors also responsible for this situation. First is the incompetence of the state government. It took the problem lightly in the early stages and in spite of the long lockdown, didn’t ramp up the health infrastructure. The Chief Minister has now accepted that shortage of beds led to a rise in death toll in Delhi. In some cases, doctors and nurses haven’t been getting PPE kits and even salaries. The accommodation and food provided to some doctors was pathetic. Private hospitals have been roped in by the state government, but an FIR was registered against a leading hospital in Delhi. How do you expect them to cooperate? Also, they are expensive. In many hospitals, nurses have resigned and aren’t willing to work because of risk to their lives. The state government has to be sensitive also. The insensitive announcement that Delhi hospitals are meant only for locals led to an outcry. So, the state government has to put its house in order with better management and coordination. Help from the MHA in the form of ITBP assistance to run a 10,000-bed facility in south Delhi, the use of railway coaches as isolation wards and the attachment of hotels and banquet halls to hospitals show promise of improvement. The Centre needs to do more as Delhi, being the national capital, can’t afford a bad name.

Then, the huge population of Delhi, of over 20 million, when added to the floating population from other states for work and treatment adds to the pressure on resources. Delhi being the capital, international travellers and those from other parts of the country descend here for business or government work regularly.

Delhi also has many mini Dharavis, leading to the spread of virus. Since independence and especially since 1970, it has become home to unauthorised constructions on encroached government land all over and many live in these in large numbers with one room having eight to ten inmates with no basic facilities and hygiene. People from all over India have been flocking to Delhi for work. But rather than properly plan an expansion of the city for the increasing population, politicians and governments in Delhi, over the years, have been giving protection to unauthorised clusters, for their vote banks, with the result that these keep on mushrooming.

There is a lot of corruption also involved. The Delhi Development Authority (DDA) has failed to plan the city properly. I had first-hand knowledge of this distressing phenomenon, as a member of the monitoring committee of the Delhi High Court from 2006 to 2008, to clear the city of unauthorised constructions and encroachments. All the good work done by the committee and the court commissioners was demolished and unauthorised construction and encroachments sprung back with a vengeance once the committee was wound up.

The problem won’t go away. Such constructions create hurdles in smooth functioning in many ways. For example, many fires have taken lives in Delhi over the years which couldn’t be controlled as the fire brigade vehicles were unable to enter the lanes and bylanes of localities which are congested with no proper lanes and width. In such a situation, the virus has to spread and fast. If, God forbid, there is an earthquake in Delhi tomorrow — and Delhi is in a high-risk zone — one can’t even imagine the loss of lives that will take place because of these mini-Dharavis. There can be other unseen problems too which will create havoc. Who knew for example that the coronavirus pandemic will hit us and the world suddenly? Therefore, a massive effort is needed by the Centre and the state government to get rid of these mini Dharavis. It may be a good idea to have a properly planned twin city for Delhi, with help from professionals, like we have Hyderabad-Secunderabad and shift all such people in proper built-up accommodation there. Should we call it Delhi and Second Delhi?